“I was looking at how many people get on and off the bus,” said Christie, who is majoring in political science with a minor in economics. “That means they don’t all have cars. So how would they get to where they’d vote? And they’d need ID and since they don’t have cars, they don’t have a license.” 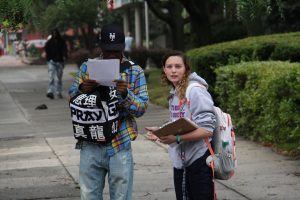 Jeffrey Vick and Kelsey Baldwin offer passers-by the opportunity to register to vote in the November election.

Across Washington Avenue, fellow students Jeffrey Vick and Kelsey Baldwin, who like Christie carried clipboards and forms, learned that Desiree DeCamp had never voted. They asked if she’d like to register; then helped her.

“They talked me into it,” said the Albany woman, 25, wheeling her two-year-old daughter in a stroller. “I’ve thought about it before. Now, I might as well go through with it. But I don’t want to vote for Trump or Hillary.”

“At least now you’ll have the option,” countered Vick, a sophomore. “If we can get everyone who can to vote, we can elect the candidates we want.” 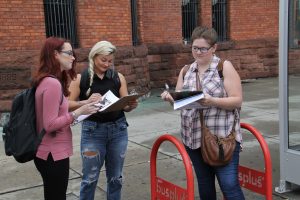 Christie, Vick and Baldwin were among 50 Saint Rose political science students who fanned out in two parts of Albany last week to register voters and gain some insight about the attitudes and barriers surrounding one of the basic tenets of democracy. Professor Ryane Straus, who brought the students here, said their assignment was to determine whether we live in a true democracy, given the low rate of participation.

“In 2008 when President Obama was first elected, 62 percent of eligible voters voted and that was a number we were happy about,” explained Straus, an expert in American politics. “I asked the class, ‘Do you feel good when you get a 62 on an exam?’” 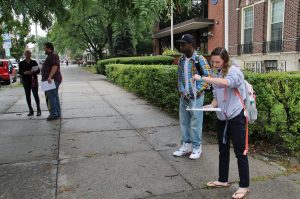 In her class, students looked at socioeconomic data associated with turnout and discussed some of the confusing laws that might discourage voting. The League of Women Voters briefed them on how to approach and register people. Now, here along Washington Avenue and outside a supermarket on Central Avenue, the professor asked them to make their own observations about the lackluster participation.

“I had the chance to register to vote in high school,” noted Christie. “Not everyone has that chance. It’s not fair.”

Fred Boehrer, director of the College’s Office of Academic Service-Learning, said the voter registration drive went well beyond community service. The exercise enabled Saint Rose students to connect their coursework about democracy to the larger world.

“We have a wonderful campus at Saint Rose and it’s a safe place for students and faculty and staff to engage with one another,” said Boehrer, who set up the drive with Straus. “Sometimes when we leave campus and go out into the larger public spaces, it’s more difficult to have those conversations, especially with people we don’t know. But this is a way to connect a course with our community partners and have our students gain a fuller understanding of what they are studying in class.” 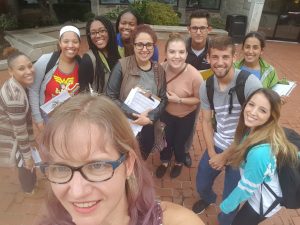 Prof. Ryane Straus with some of her students before heading out to register new voters in Albany.

Students said they found the experience rewarding, though some commented on how they felt slighted by people who ignored them. Some were struck by how many people said they were registered to vote – and they wondered how many actually voted. Some students found it easier than others to approach strangers. But by the end of the exercise they had collectively registered 20 new voters.

At the supermarket, Boehrer saw a number of store employees register during a break – and one who had just finished his shift and made a point of approaching the students to do so. “There was a lot of good engagement,” Boehrer said.

In front of the Albany Public Library, Carlton McLeod said he had thought he was not eligible to vote because he had been convicted of a felony. But freshman Destiny Knuckles and sophomore Shayla Clark let him know that in New York felons may vote once they have served their sentences. McLeod enthusiastically filled out registration forms. He said the students had made the difference.

“They approached me in a very polite way,” said McLeod. “I like that they weren’t nervous.”