Commencement Celebrates Students and the World as their City; Honors to Sister Katherine Hanley, CSJ, and More than 1,500 Students 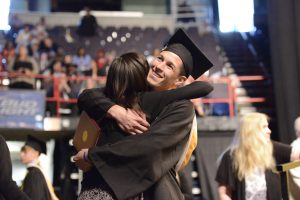 ALBANY (May 14, 2016) — It was a day for celebrating outstanding accomplishments, determination of will, centuries of service to the “dear neighbor” and exceptional futures in going global.

The College of Saint Rose celebrated its 93rd Annual Commencement today by awarding more than 1,500 bachelor’s and master’s degrees and certificates of advanced study from its School of Arts and Humanities, Huether School of Business, Thelma P. Lally School of Education and School of Mathematics and Sciences.

The ceremony was held in the Times Union Center in Albany, New York, and attended by more than 6,000 graduates and families, plus Saint Rose faculty and staff.

Sister Katherine Hanley, CSJ, Ph.D., educator, theologian, poet and Saint Rose trustee, received an honorary degree as approved by the Board of Trustees and delivered the Commencement address. 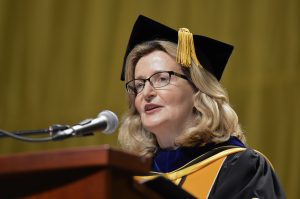 “When we take the time to get to know people from other countries, whose religion is one we have not encountered, whose ethnicity, culture or nationality is one that we are not familiar with – every time this happens, boundaries are broken down and minds are opened. That is what defines education,” Stefanco said.

Stefanco also implored the graduates to help others the way she was helped as the first in her family to attend college.

“Seek opportunities to mentor young people, and help them to see higher education as the transformative opportunity it has been for you. Be a guide for other students and lift them up,” she urged.

In her address to the graduates, Sister Katherine connected the Class of 2016 to the six women who founded the Sisters of St. Joseph in LePuy, France, in 1650. The first six sisters were challenged to divide the city, looking about and going wherever there were needs, serving the “dear neighbor.” Sister Katherine compared that to the College’s annual “Reach Out Saint Rose,” a day of service each fall during which hundreds of students, faculty, staff and alumni fan out into the community to serve “what we still call the dear neighbor.”

“The first sisters had only the city for their world. You have the world for your city. Change it, heal it, bless it. I know you will, because you already are,” she told the graduates. 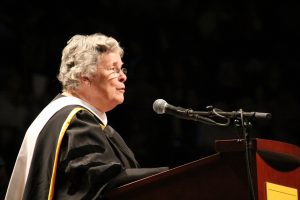 Sister Katherine also noted a program in the College’s Hubbard Interfaith Sanctuary earlier this year that focused on the scourge of human trafficking. A standing-room-only crowd that evening listened intently as Edwina Gateley and Brenda Myers-Powell gave insight into the underground world of sex trafficking and about their personal experiences and advocacy work.

“Like those first sisters, you are willing to weave, to network, so that life may be better for others. Those sisters would know exactly what you are doing and they would be proud,” Sister Katherine said. 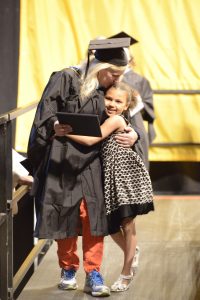 Tracey Pacelle, who earned a master’s degree in education and a certificate of advanced study, spent commencement with her daughter, Serene, 7. Mother and daughter walked hand-in-hand in the academic processional, sat together and exited the ceremony together, though Serene did not accompany her mother across the stage to receive her diploma, her second master’s degree.

“I wanted her to set the bar high and show her what she could achieve,” explained Pacelle, a sixth grade special education teacher in the Bronx, as her daughter looked on, clutching a book.

Members of the class of 2016 exhibited a larger than usual number of personalized, and often highly elaborate, mortarboards. The parade of personalized caps reflected an academic area, a piece of inspiration or bit of whimsy, along with a profusion of floral designs. Among these was “Get Meowta Here” decorated with a cat, “Next Step: Everywhere” decorated with a globe, ”To Teach is to Touch a Life Forever” and “Future CPA.” 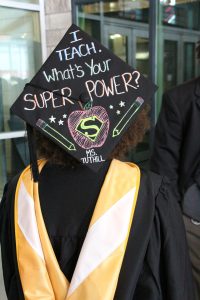 On her mortarboard, Jazzmyn Tuthill wrote “I Teach. What’s your Super Power?” alongside the Superman insignia. She said that she was so grateful for her Saint Rose education for not only equipping her with strong academics, but also experience teaching refugees, children with autism and local children in an after-school program near campus.

For her mother, Sheree, the most meaningful moment of the ceremony was one of the last, when Interim Provost Barbara Schirmer described the power of helping the world one person at a time. To illustrate, Schirmer told the story of small boy who came upon a beach full of stranded star fish and threw back as many as he could, one by one.

“That is my daughter! She once rescued a turtle,” said Sheree Tuthill, who lives in Saranac Lake. “She worked at Pine Hills Elementary and Eagle Point Elementary, and she said if she could make a difference in one child’s life it would all be worth it.” 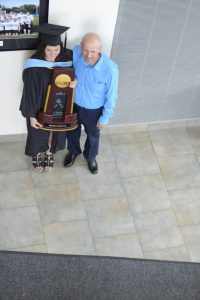 After receiving her second Saint Rose diploma, a master’s in special education, Carmelina Puopolo took a few minutes to pose with the trophy from the 2011 NCAA Division II National Soccer Championship. It was an honor the decorated player, an intrepid forward, was instrumental in winning. And she was the last remaining player from the championship squad at Saint Rose.

Now, she reflected a bit as she hoisted the heavy trophy and her family snapped photos.

“I think I grew up here,” said Puopolo, who is from Toronto and plans to return there to pursue a teaching career. “I was so homesick at the beginning. Now I have new memories, friends and became so busy with soccer. Now, I will always come back here and know this is my second home.”

A Saint Rose alumna, 25-year faculty member, dean and long-time member of the Board of Trustees, Sister Katherine has lived the College mission as she has participated in campus life. She moved from Syracuse to Albany after high school to join the Sisters of St. Joseph of Carondelet, taking her vows in 1959. She earned a degree in English from Saint Rose in 1961, master’s and doctoral degrees in literature from Notre Dame with a minor in Renaissance art, and later received a certificate of theological study from the Graduate Theological Union in Berkeley, California.

In 1985, the Sisters of St. Joseph called Sister Katherine to leadership in their congregation. From the congregation’s base in St. Louis, she traveled to Japan, Chile and Peru to support the sisters there. From 1999 to 2014, she served as theology professor and then associate dean at St. Bernard’s School of Theology and Ministry, a graduate school located in Albany. More than 100 students graduated during her tenure, becoming ministers in their own parishes or incorporating what they had learned to inform their work in medicine or human services.

Sister Katherine retired recently from St. Bernard’s to co-found Holy Ground, a ministry designed to train spiritual directors, whose services she believes are sorely needed. Her influence continues to be felt far and wide as a result of the retreats she leads for people of all faiths and the pilgrimages to holy places, including LePuy, France, where the Sisters of St. Joseph congregation was founded. 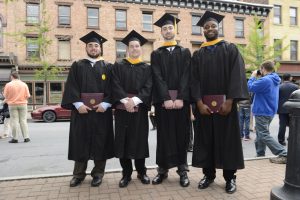 In addition to her 17 years as a Saint Rose trustee, Sister Katherine has devoted herself to many other organizations, including the Clinical Pastoral Education Board at Albany Medical Center and the board of the Dominican Spiritual Life Center. The Roman Catholic Diocese of Albany awarded her the Bishop Edwin Broderick Award, recognizing work that leads to a renewal of the church. Sister Katherine also received the Community Service Award from the Capital Region Theological Center.