ALBANY (December 21, 2015) — The Esther Massry Gallery at The College of Saint Rose presents “Animating Destiny: Electric Paintings and Other Works by John Knecht,” an exhibition that features multiple channel videos, paintings and works on paper. A new body of videos, recently completed as artist-in-residence at Signal Culture in Owego, New York, will be shown for the first time.

The exhibit opens Sunday, January 24, and continues through Sunday, February 28, at the Esther Massry Gallery, located in the Massry Center for the Arts, 1002 Madison Ave., Albany, New York. Gallery hours are: Monday–Friday noon–5 p.m., Sunday noon–4 p.m.; closed Saturday. The gallery will be open for 1st Friday, February 5, from 5 p.m. until 9 p.m. 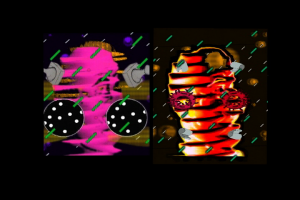 A gallery reception will be held Friday, January 29, from 5 p.m. until 7 p.m. In addition, the artist will present a lecture at 7 p.m. in Saint Joseph Hall Auditorium, 985 Madison Ave., Albany, New York. Both events are free and open to the public.

Knecht has been active in making experimental and avant-garde film and video since the 1970s. His films, animated videos and multiple channel installations, paintings and drawings are informed by his rural Midwestern, evangelical upbringing in the 1950s. They reveal a fascination with unknown, imagined spaces that exist outside of our rational, physical world. Most of his better known work is animated, including The Possible Fog of Heaven and The Poxiox Series. The artist explains, “Welcome to my world. You enter at your own responsibility. I am providing the material for provocation. I am not providing the answers.” 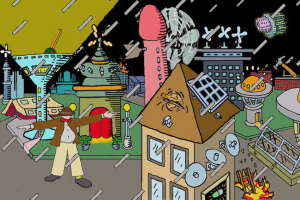 Knecht’s works are held in the collections of the Munson-Williams-Proctor Arts Institute, The Queens Museum, California Institute of the Arts and more. Awards include New Forms, Rockefeller Foundation and the National Endowment of the Arts; Jerome Foundation; New York Foundation for the Arts, Artists Fellowship.

Recently retired, Knecht holds the Russell Colgate Distinguished University Professor of Art & Art History and Film & Media Studies, Emeritus at Colgate University. He held the chair in media studies at Colgate, where he taught since 1981. In addition, he served as chair of the Art and Art History Department from 1991 to 1999.

The artist also taught in the Semiotics Department at Brown University in 1980 as a visiting lecturer. He served as assistant professor in the School of Art at the University of Oklahoma from 1974 to 1978. From 1980 to 1982, he served as a member of the executive committee at the Collective for Living Cinema in New York. Knecht was a member of the board of governors of the National Conference on Undergraduate Research from 1993 to 1999.

Knecht holds a master of fine arts degree from Idaho State University and a bachelor’s degree from the University of Wisconsin at Oshkosh. He served in Vietnam with the U.S. Army’s Ninth Infantry Division from 1967 to 1968.

For more about the artist, visit www.johnknechtart.com.

For more information about the exhibition, visit www.strose.edu/gallery or contact Jeanne Flanagan, gallery director and curator, at 518-485-3902 or flanagaj@strose.edu.