ALBANY (November 6, 2015) — Four or five times a week, usually between classes, Eric Cislo, a Saint Rose senior studying information technology, stops at the new Veteran Center to study, relax or talk to some students he has a great deal in common with.

“Most of the students in my classes are just out of high school. I’ve had 13 years in the military. I have a wife and kids,” said Cislo, 35, a Navy veteran, on the freshly painted front porch of the center at 967 Madison Ave. “Having this has made a huge difference. I have met people I didn’t know before who I can open up to. Now I am definitely in my comfort zone.” 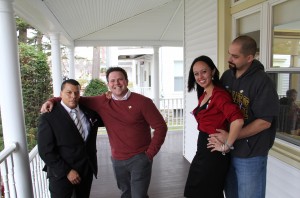 Likewise, Dwayne Chandler, also in his 30s, who served three tours in Iraq and one in Afghanistan as an Army medic. He found adjusting to college life difficult his first year.

“I’m having a much better year. This has really helped,”  said Chandler, a biology major in his second year at the College.

The most visible example to date of the College’s commitment to its military students, the Veteran Center was dedicated Friday in a formal ceremony in the Carl E. Touhey Forum that featured a host of dignitaries, including Albany Mayor Kathy Sheehan, Albany County Executive Daniel McCoy, Assemblyman John McDonald, state Senator Elizabeth O’Connor Little, Congressman Paul Tonko, Bishop Edward Scharfenberger and members of the military service.

The Tri-County Council of Vietnam Era Veterans posted the colors. Professor Emeritus Sr. Marguerite Donovan ’54 G ’62 discussed the decision 70 years ago at the all-female college to allow soldiers to take night classes, paving the way to a coeducational institution Saint Rose would become. Col. Michael J. Barcomb ’87, winner of the Bronze Star and numerous other honors, commented on the great strides the College is making.

Cpl. Shawn Sutton ’17, USMC, who heads the Saint Rose chapter of the Student Veterans of America, said that military students continue to serve – feeding the homeless and volunteering at the USS Slater, a destroyer escort ship anchored in downtown Albany.

“If you are impressed with what we have done so far,” he noted, “stay tuned. We are just getting started.”

Collectively, the event painted a picture of an institution that reveres its military students and celebrates the maturity and experience they bring to the student body.

“Thank you for bringing your experience, your values, your commitment to our campus community,” said Saint Rose President Carolyn J. Stefanco, who noted that her father and father in-law had served in the Korean War and World War II, respectively. “It is your collective presence that gives the Veteran Center a pulse and a purpose. We are honored that you chose to call Saint Rose home.”

As Stefanco and others noted, in the past two years Saint Rose has doubled its enrollment of veterans, current service members and military families to 157. The College has been named a “Military Friendly School” by publisher Victory Media for five consecutive years, hosts a chapter of the Student Veterans of America and works closely with the Veterans Administration.
Now, not only does the College have a dedicated space for its military and veteran students, but New York State Industries for the Disabled Inc. (NYSID) has named it a “Battle Buddy Center,” a safe haven for veterans to socialize with their fellow veterans and receive services they need. At 1,300 square feet, the Saint Rose site is the organization’s largest and the first at a private institution. To support the effort, NYSID awarded a $10,000 grant. 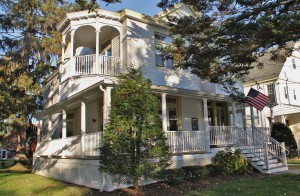 The new Veteran Center at The College of Saint Rose is a home-away-from-home for student veterans and military families.

In addition, the center received a 2015 Vet Center Initiative grant from The Home Depot Foundation and the Student Veterans of America. The funds will be used to outfit the center with additional furniture, computers and other equipment.

But quietly, and in simple ways the facility along a highly-trafficked stretch of Madison Avenue has already helped many students ease the transition since it opened at the start of the semester.

Jessica Cislo, a Navy veteran who is married to Eric Cislo, said she enjoys having an opportunity between classes to chat with other students like her.

“We are veterans – and we have three children,” noted Jessica Cislo, a psychology major.

Jordan Powell started at Saint Rose in the fall, following two tours in Afghanistan and one in Iraq for the Army. A double major in political science and computer science, he visits the Veteran Center frequently to study, take part in a work-study program with the local Veteran Administration and talk to fellow veterans. He has become friends with Eric Cislo, who had him to the house for a recent Halloween/anniversary party.

To read more about programs for veterans.