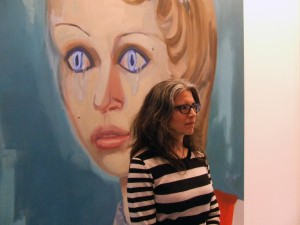 A gallery reception will be held Friday, October 16, from 5 p.m. until 7 p.m. The artist will present a talk at 7 p.m. in Saint Joseph Hall Auditorium, 985 Madison Ave., Albany, New York. All events are free and open to the public.

Preceding the reception from 4:30 p.m. to 5 p.m., the artist will sign her book, Janet Werner, Another Perfect Day, documenting her 2013-15 solo touring exhibition across Canada, published by Kenderdine Art Gallery, University of Saskatchewan, Canada. The hardcover publication includes essays by noted writers, educators, artists: Anne Carson, John Kissick, David Balzer and Robert Enright. A limited number of copies will be for sale.

Werner’s work as a painter focuses on the fictional portrait as a vehicle to explore notions of subjectivity and desire. Her paintings operate within and against the genre of conventional portraiture, taking found images of anonymous figures in popular culture and imbuing them with fictional personalities. The process of painting is a way of investigating the iconic power of the image, invoking imagination, memory and projection to invest the nameless figure with human subjectivity and emotion. The final paintings are composite portraits that retain aspects of the original while also embodying notions of transformation, innocence and loss.

In Werner’s recent paintings, there is an argument between beauty and the grotesque, where the figure itself has become the site of contest. Folded, cut, occluded or altered, with colors ranging from luminous to ashen, and scales shifting from pixie to giant, these figures possess an otherworldly aspect. There is a subtle suggestion of witchcraft in these portraits, though it is not clear if these beings are the ones casting spells or the ones upon whom the spell is cast. The artist states, “I am obsessed by faces and eyes, especially eyes, eyes that look at you and eyes that look away; wide-eyes, staring eyes, knowing, sad, unblinking eyes.” 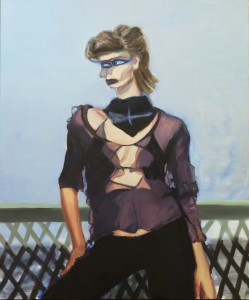 The essay, “Someone/Something/Nothing,” written by John Kissick, accompanies Werner’s exhibition. He writes, “Moving from painting to painting, we are left with little alternative but to measure the subtle slippage of the soul, where the individual slides back and forth between potential and annihilation.” The essay first appeared in the summer 2013 edition of Border Crossings Magazine and is reproduced in Janet Werner, Another Perfect Day, available in the gallery.

Werner was born in Winnipeg, Manitoba, in 1959. She received her master of fine arts degree from Yale University and her bachelor of fine arts degree from the Maryland Institute College of Art in Baltimore. She has shown widely in Canada including solo shows at the Art Gallery of Windsor in Ontario; SBC Gallery, Montreal; The Mendel Art Gallery, Saskatoon, Saskatchewan; The Contemporary Art Gallery, Vancouver, British Columbia; The Ottawa Art Gallery in Ontario; and Plug In Institute of Contemporary Art, Winnipeg. Manitoba. Recent group exhibitions include “Project/Peinture/The Painting Project” at Galerie de l’UQAM, Montreal; “Generation” at the Art Gallery of Alberta, Edmonton; “Intrus/Intruders” at Musée du Québec, Québec City; and “Painting Perspectives” at AXE Neo7, Gatineau, Québec. Internationally, Werner’s work has been exhibited in the Prague Biennale and in the survey exhibition “Oh, Canada” at MASS MoCA in Massachusetts.

For more information about the exhibition, visit www.strose.edu/gallery or contact Jeanne Flanagan, gallery director and curator, at 518-485-3902 or by e-mail .