December 17, 2015 — For the past four years, Saint Rose graduate students have taught reading at an after-school program two blocks from campus where the children not only speak little English but have often endured unconscionable violence.

“They’ll say things like ‘I’m here in this country with my mother. My father and brothers were killed before coming over,’” noted retired Professor Irene Rosenthal, who taught literacy. “The only response is to be as consistent and caring as possible.”

The partnership between Saint Rose and the center, the Refugee and Immigration Support Services at Emmaus (RISSE), has now raised the English proficiency of dozens of refugee children who simply cannot count on the same attention at school. The partnership has also generated grants for the center – while dramatically strengthening the skills and strategies of the Saint Rose students, who are certified teachers pursuing a master’s degree in literacy.

An article Rosenthal has published in the Journal of Public Scholarship in Higher Education describes a dynamic that blurs the line between academia and community service. Titled “Exploring the Growth of a College Community Partnership,” the article appears in the fall issue of the publication, which showcases the pedagogical benefits of community engagement.

“Colleges and universities are increasingly taking part in community projects,” noted Rosenthal, who serves on the board of RISSE. “This article might give other colleges guidelines they can use to encourage them to do something similar.”

RISSE offers after-school services for approximately 75 refugee children from 23 countries in Eastern Europe, Africa and Southeast Asia who have often fled war or lived in crowded camps. Saint Rose first turned to RISSE as a placement for graduate students, only to gradually enter into what Rosenthal calls a “mutual inquiry” project in which both parties are devoted to tackling the same problems.

Saint Rose literacy students who work closely with the children explore how to incorporate cultural heritage into reading lessons. And students are often able teach a child for successive semesters.

“Our students are getting an experience at RISSE they couldn’t get in elementary schools, which are much more restrictive,” Rosenthal said. “This is far more authentic than what they could learn in any other setting.”

It is an approach that has paid off in many ways.

In two years, she writes, 50 percent of the children tutored improved at least one reading level, while 15 percent improved four to six reading levels. Rosenthal believes the children look forward to the tutoring after, perhaps, being overlooked at school. 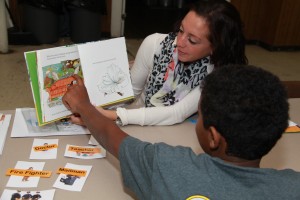 A Saint Rose literacy student works to raise the English proficiency of a refugee child.

Saint Rose students also have secured small grants to improve the educational offerings at RISSE. One established a successful incentive program that allows children to win a prize – perhaps their only toy – for reading books. Another grant was used to purchase tape recorders, headphones and tapes to help children practice their English.

Literacy students secured a third grant to purchase 25 basic reading books set in the children’s countries, including Thailand, Sudan and Iraq. The Saint Rose students gained the opportunity to study the impact of the cultural materials.

“Children were generally overjoyed to see pictures of places that looked familiar to them,” said Rosenthal, who noted that some, however, were disturbed by reminders of home and the violence there.

Rosenthal noted that working at RISSE has its challenges. The setting is rustic. Lessons have been canceled when the furnace has broken. Tutoring children with so little formal education – even limited contact with electricity or indoor plumbing – can be daunting. Rosenthal referred to one first grader who constantly left his lesson to watch the water swirl through the restroom toilet.

But she notes that the success lies in the fact that the work Saint Rose does at RISSE is mutually beneficial.

“The most common mistake is to think of it as merely altruistic,” she concluded. “An awareness of how each partner is contributing to and benefiting from the relationship is basic to the enterprise and fundamental to the critical reflection that distinguishes this work as academic not philanthropic.”

Click here to read about the Saint Rose graduate program in literacy.