Don’t forget to share your own news with us by emailing Irene Kim at kimi@strose.edu.

Sam Kubik ’19 has been operating her own health-and-nutrition-focused restaurant, The Ritual 518, in Guilderland, New York, since December 2019.

Lucas Lavera G’19 has started as an academic advisor at the University at Albany in Albany, New York.

Jackson Murphy ’19 has begun a podcast series with film critic colleagues all about movie theaters. Listen to a recent podcast.

Police Officer Jessica Mausolf ’18 and a cute 5-year-old boy competed in an impromptu dance-off to Michael Jackson’s “Beat It” in Hudson, New York. 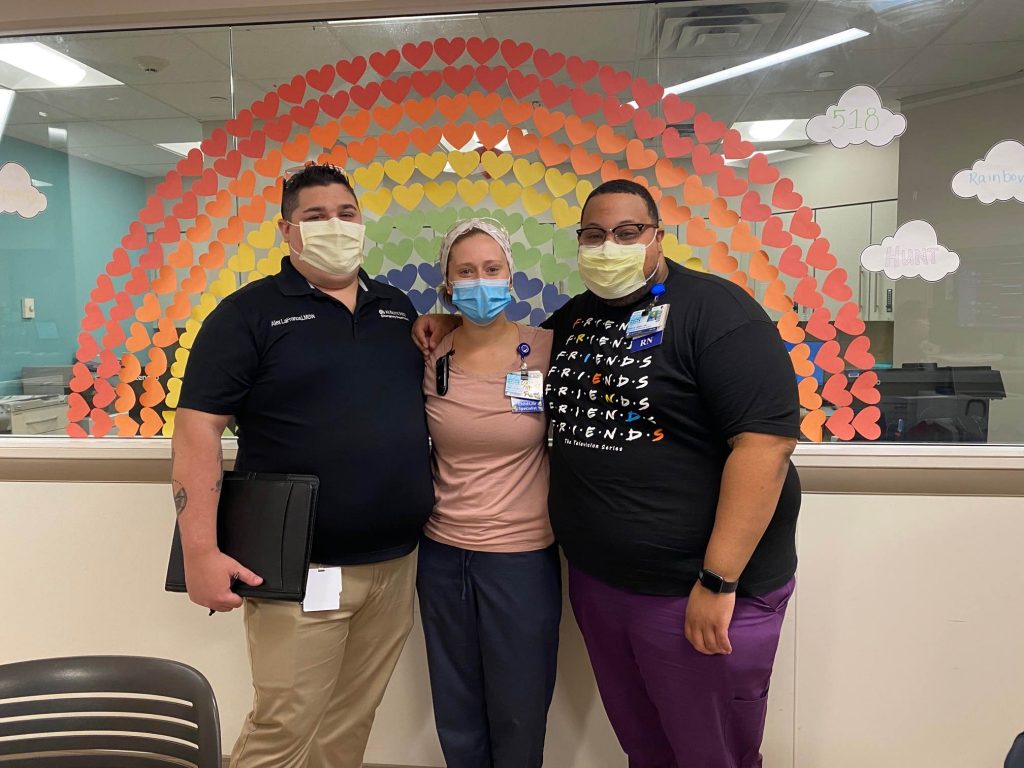 Carly Weller ’17 reported on herself and two Saint Rose alums, all working at Albany Medical Center: “Alex LaFrance ‘15, Carly Weller ‘17, and Mark Jones ’17 are all Saint Rose grads continuing to serve the Albany Community at Albany Medical Center. Alex is a Social Worker in the Emergency Department, Mark is a Pediatric Float Pool Nurse, and I am a Child Life Specialist in the Pediatric Emergency Department!”

Wayde Dazelle ’16 has started as health economist at Children’s National Hospital in Washington, D.C. “I’m a health economist for the FLiPRx research group at Children’s National Hospital. We are launching a pilot program to address food insecurity in DC. We are providing participating families with packages of fresh fruits, vegetables, and other items. We also provide video tutorials about how to utilize those foods, in case the participants are unfamiliar with those particular items. I’m developing a cost-effectiveness analysis of the pilot to evaluate its utility and its potential for expansion!” In addition, Dazelle was interviewed by Photonics about COVID-19 in March.

Jonathan Munroe ’16 has become an asset manager at Target in the Albany, New York, area.

Brett Cannon ’15 is a chief accountant in the finance department at the Center for Disability Services in Albany, New York. This is his fifth year with the organization.

Maria Sanchez Gonzalez ’13 was featured in a podcast by Bridging.

Rebecca Lewis ’12 is an epidemiologist tracking COVID-19 in Richmond, Virginia.

Marissa Salzone ’12 was announced as a graduate of the Leadership Institute Class of 2020 by the Rensselaer County Regional Chamber of Commerce.

Nicole Peterson ’09 was announced as a graduate of the Leadership Institute Class of 2020 by the Rensselaer County Regional Chamber of Commerce.

Kristine Monahan ’09, G’11, an art teacher at Albany High School, was featured in “Perspectives in Online Learning” from the City School District of Albany.

Joe Burke G’01, a home-school coordinator at Stephen and Harriet Myers Middle School (Albany, New York) was featured in “Perspectives in Online Learning” by the City School District of Albany.

Wesley Price ’01 was announced as a graduate of the Leadership Institute Class of 2020 by the Rensselaer County Regional Chamber of Commerce.

Francesca Delsignore ’82, G’01 a music teacher at William S. Hackett Middle School in Albany, New York, was featured in “Perspectives in Online Learning” from the City School District of Albany.

Katharyn Howd Machan ’74, the first Poet Laureate of Tompkins County in New York State, was featured for her teaching and writing at Ithaca College (Ithaca, New York), as well as for her belly dancing.

Ann Mataraso ’54, G’58
We will all miss Ann Mataraso ’54, G’58, beloved wife of Trustee Matt Mataraso, and a jewel of creative light and expression in our Saint Rose community. Ann met Matt at the College’s annual May Day parade in 1954, while Ann was a senior at Saint Rose majoring in sociology. They were married one year later. Ann then earned her master’s degree in elementary education at Saint Rose in 1958, and taught while Matt attended law school. Later in her life, Ann pursued her passion as a studio artist, and earned her MFA from the University at Albany at the age of 70. Many of us remember Ann’s gregarious presence at board dinners and events.

Marguerite Joyce Fonda ’81
We bid a fond farewell to Marguerite Joyce Fonda, who served as Alumni Association president from 2000 until 2004 and served on the Alumni Association from 1996 until 98, and was a member of the Greater Capital District Alumni Chapter. Born in Troy and raised in Watervliet, she graduated from Watervliet High School in 1948, worked in the accounting department of the National City Bank of Troy, and then studied at Samaritan Hospital School of Nursing. She married Matthew J. Finlan, and began working as a licensed practical nurse at Samaritan Hospital in Troy, then in Cohoes Memorial Hospital. She trained in coronary care at Ellis Hospital in Schenectady, then worked in the Intensive/Coronary Care Unit at the Cohoes Hospital until 1979. She earned an associate’s degree at Excelsior College to become a registered nurse, and began working in administrative capacities at Cohoes Hospital until 1985. She earned her B.S. in Business Administration in 1981 at Saint Rose and began working for the Northeastern New York Health Care Consortium of Empire Blue Cross/Blue Shield in Albany, New York. She and her team were responsible for reviewing all aspects of the Designed Care Program in hospitals throughout the Capital Region and other parts of New York State. She retired in 1990 after experiencing serious health issues. She volunteered extensively throughout the Capital Region, including working for 25 years at Proctors Theatre in Schenectady. She loved traveling, crafting ceramics, and spending time with her family. To express your condolences, please visit dufresnefuneralhome.com.

Kyle D. Robinson ’21
Kyle Daniel Robinson, who was to begin his senior year as a music industry major at Saint Rose this fall, tragically passed away in a fatal automobile accident in July. Kyle graduated from PNHS in 2017 and served as a leader for Troop 9. Kyle finished an Eagle Scout. He was part of the Rose Label record group. Students and faculty held a small memorial for him outdoors on campus earlier this month.