Hai Ling '93 has a successful career with Mastercard, serving as co-president, Asia Pacific. But he hasn't forgotten the role his alma mater played in his life after he arrived at Saint Rose as an undergraduate student from China. Now, as a member of the Saint Rose Board of Trustees, he is happy for an opportunity to give back. 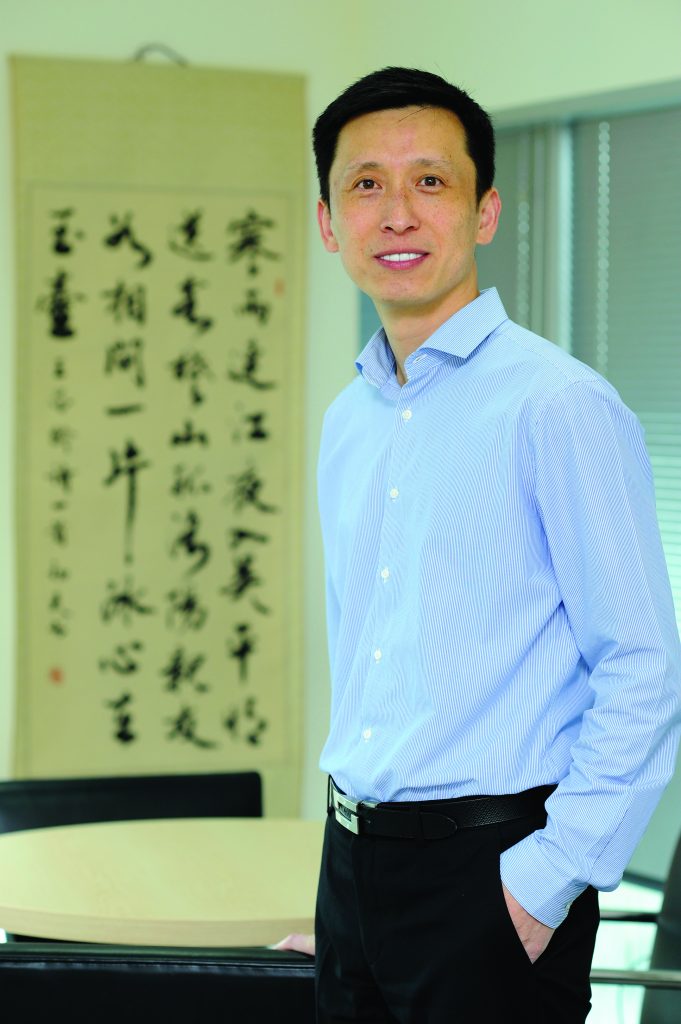 Back when Hai Ling was pursuing a bachelor’s in business administration at Saint Rose, and well before he rose through the ranks at Mastercard, people in his home country had little cash on hand, let alone access to credit.

“Nowadays, people in China buy multi-million-dollar homes,” says Ling ’93. “But when I was at Saint Rose, what I made in one hour, $4.25 at the campus computer lab, was what my mother made in one week back in China.”

Ling says that, while slowing, China’s growth remains astounding, with $800 billion expected to be added to the economy in 2019. To remain a key player on the world stage, he believes the country will need to embark on structural reforms that are domestic in scope. As a longtime Mastercard executive, he has had a front-row seat for the transformation.

As Co-President, Asia Pacific, at Mastercard, Ling helps navigate operations across one of the world’s most dynamic regions, anchored by the mega-economies of India and China. He oversees business strategy, sales, business development, product management, marketing, and engagement with customers and regulators. In addition, he serves on the company’s Global Management Committee.

Ling’s perspective as a business leader has been shaped by a career divided nearly equally between the U.S. and Asia. A native of Shanghai, he was among the first students to enroll in American colleges when China’s borders opened.

At Saint Rose, it didn’t take him long to distinguish himself. While excelling in business, he also took advantage of the College’s offerings in psychology, creative writing, and public speaking. He served, fittingly, as the student government’s vice president for finance.

In reflecting on his Saint Rose education, he has often said that the approach of seeking answers, not necessarily just knowing the answers, is what stands out. His professors recall how Ling’s questions kept them researching their own fields. He also benefited greatly, he says, from research and group projects.

After graduating, Ling earned an MBA at the University of Chicago’s Booth School of Business. He has also worked for Bank of America and MBNA. Prior to his current role at Mastercard, he held executive positions for the company in Beijing and London.

Today, at 49, Ling is contributing to the College as a member of the Saint Rose Board of Trustees. Most recently, in October, he delivered the annual Peter M. Tully Lecture.

Here, he discusses his cross-cultural journey and the role that his time at Saint Rose has played, both personally and professionally:

I have lived and experienced many different cultures and environments. To quote Dan Vera, “I gain wisdom from more than one fountain.” There have been many critical crossroads and decision points, including going to the U.S. to pursue a new life, and coming back to Asia to try out a new career. There have been many kind people who have played instrumental roles along the way, including my parents, host family in the U.S., teachers and professors and bosses and mentors from work. However, none by themselves could have shaped who I am today. I have gained wisdom from more than one fountain. I have learned how to appreciate the world outside my own with an open mind and deep respect.

I now believe there is only one common world we all inhabit. We are all temporary custodians of the land and wealth we own. Borders are arbitrary. I experienced many losses and disappointments that felt unbearable at the time – that school I did not get into, that job offer I did not receive, that promotion I was passed over for, and that investment which went sour.

In truth, none of them actually mattered. Each became, critically, a learning opportunity.

Learning is one key dimension of fulfillment. Another is contributing and making a difference in other people’s lives. For me, this manifests in my serving as a trustee for my alma mater, mentoring young employees in the Mastercard Graduate Development Program, actively participating as a fellow to the Aspen Global Leadership Network, and volunteering for causes that I believe in.

I do this because many kind people that impacted my life have always said one common thing: “Pay forward the benefit that you have received.” Also, I realize now that there were many things I did not – and could not – know when I was a student. I did not predict China would have risen at such a rapid pace. I did not fully appreciate the power of the internet. But, of course, hindsight is 20-20. No one can predict the future. No one can know everything.

Instead, a student should always remain curious. Life is a journey of learning, and I’d like to support that for the students of Saint Rose.

In doing so, you soon begin to recognize the similarities that connect you, rather than the differences that distance you. For example, all parents want a better life for their children. Most people want to be helpful to others. Most enjoy the company of friends and families. Most of us want to live a meaningful and fulfilled life. When we start to intuitively sense the “differences that bind,” we are able to drive towards more inclusive experiences and outcomes for ourselves and all those whose lives we touch.