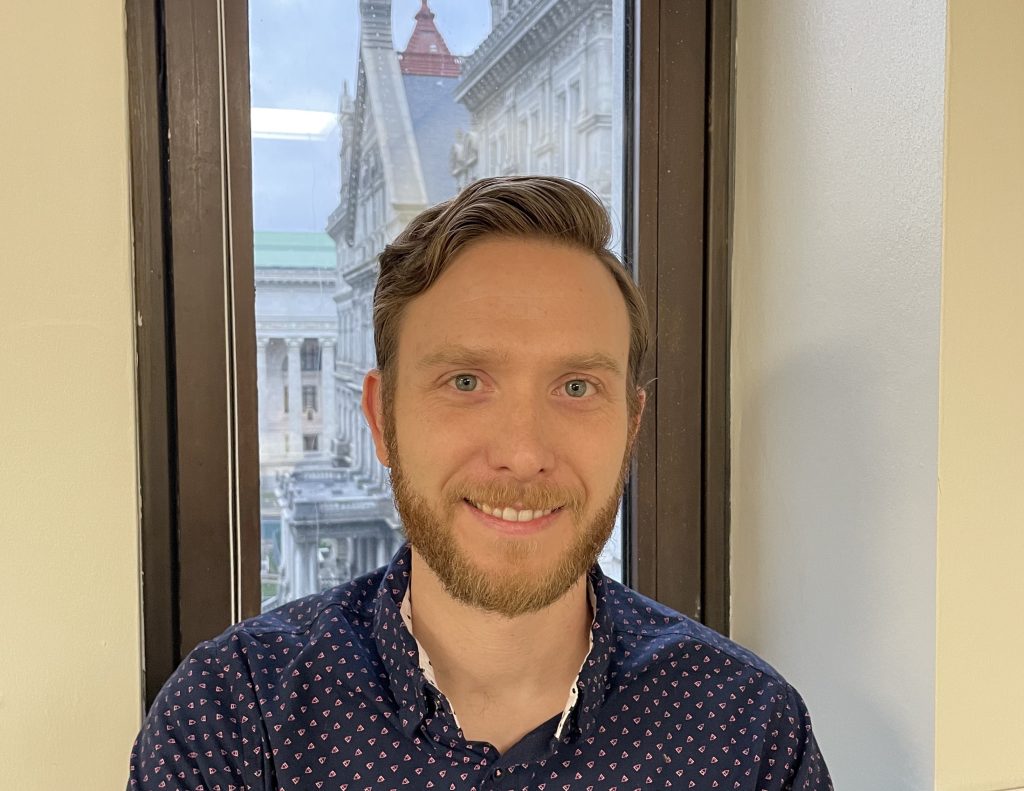 Since earning his Saint Rose graduate degree a dozen years ago Steven Gamache has been devoted to public service. After distinguishing himself as a teacher, winning a top award in the process, he has turned his attention to protecting New York’s rural landscape. As communications director for New York State’s Legislative Commission on Rural Resources, he is as committed to promoting renewable energy as to building the literacy of young people.

“The No. 1 thing for me right now is the environment,” says Gamache, 36. “I’ve come to believe that if we don’t act on a grand scale very soon, the nature of everything – housing, health care, social inequality, schools, and beyond – is going to be radically different in decades to come.”

After graduating from Fordham University with an English degree, the Troy native earned his master’s degree in secondary education-English at Saint Rose. He taught eighth grade and was ELA curriculum manager at Paul Habans Charter School in New Orleans. There, Gamache’s relatable, interactive approach to students contributed to a substantial rise in proficiency and earned him a coveted Milken Educator Award.

He and his wife, Diana, have since returned to Troy to be close to family. Now, Gamache has shifted his focus to public policy. Here, he discusses his work:

Why turn your attention from the classroom to New York’s rural resources?

My entire adult life has been in public service, and I’ve always been interested in politics. I started exploring government roles where I could work to make that bigger impact. After moving back to the area, I started to see New York taking initiatives on issues that were important to me, like climate. Where the federal government can be slow to move, New York can be a little more aggressive and independent on regulations.

I’ve always had a lot of pride in being from upstate New York, especially Troy, and this was a good opportunity to amplify the needs of our state. With my background in English, communications seemed like a logical next step.

What is the New York State Legislative Commission on Rural Resources?

It is a commission based in the New York State Senate that is bipartisan and includes representatives from the Assembly and Senate. The commission advises legislators on issues that impact all of upstate, cities and suburbs included. New York City tends to get a lot of attention, so this is a way to represent the needs of New Yorkers at large. The commission has historically had a lot to do with agriculture but has expanded into the environment, energy, education, health care, Broadband, really anything you can think of.

I’m responsible for written communications – social media, brochures, letters, memos, and probably much more come January (the legislative session). I do tours across the state, whether that’s seeing Cornell’s research facilities or visiting farms in Washington County. I’ve been learning a lot about many different topics.

What are you most passionate about?

The environment. Cutting emissions, protecting our air and water, transitioning to clean, renewable, sustainable energy sources, those are pressing concerns.

I’m lucky to work with a staff that has this shared vision and knows how to move the needle. A lot of the promotion I do is on social media, but we also work on physical forms of communications. I look forward to forging connections with legislators, staff, and various stakeholders.

There are ways to move away from fossil fuels while being mindful of farmers, for example. One technology that I didn’t know about is agrivoltaics, where you merge solar and agriculture. It may be disruptive but in the long run, you can earn extra income by siting solar panels on your farm, you can use that energy, and save on expenses. You and your family can continue to farm for generations to come.

That kid who jumped three grade levels in one year in reading doesn’t just wake up one morning with that growth. It happens after grinding every day with that kid, the teacher, the parents all working really hard.

Progress in state government is the same. But the equation includes more people, and that means more opinions and feelings. I’m excited to see what happens once we get into that process. It’s going to mean late nights, a lot of negotiating, and probably some disappointment. But I felt this way when I started in high-needs schools. If I’m not working to move things in the direction I want to see, then I can’t really complain when things fall short.

And with every year comes a new legislative session, a chance to pick up the items that may not have been popular enough the year before. It’s a natural reset, like the start of a new school year.

Does your teaching background play a role?

Teaching writing has really set me up for communications. Whether it’s on social media or creating an issue-specific brochure, I’m thinking about the best way to inform or persuade people, and I have tons of experience with students to do just that. Even working with students to break down different text structures has helped me think through how to set up written communications in a clear, logical way.

When I was a teacher, my entire career was in underserved communities, typically across regional, racial, cultural, and socioeconomic differences. So being able to use that background in building relationships and trust has been critical. Our constituents come from many different walks of life and working with them to hear them out and build consensus is some of the most valuable work.

How has Saint Rose helped you on this journey?

I haven’t attended Saint Rose in 12 years, but I still regularly think about my time there. Even early on in my career, I would get compliments from colleagues and administration on my planning and preparation. My entire foundation for curriculum and instruction, I owe to Saint Rose. They do so much to help prepare you for the profession. Most schools don’t have pre-existing lesson plans, and often you’re creating assessments, lessons, and classwork on your own. I don’t know what kind of teacher I would have been without Saint Rose.