Steven Gamache G’10, who teaches eighth-graders in New Orleans, Louisiana, is one of those educators who doesn’t just inspire kids: He helps them discover the magic of literature, love learning, and see a brighter future for themselves. 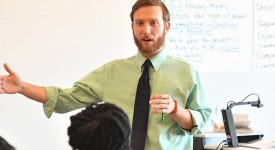 In November 2019, Steven Gamache G’10 was sitting in an all-school assembly at Paul Habans Charter School in New Orleans, where he’s been the lead eighth-grade English teacher and ELA curriculum manager and coach since 2016. The speeches seemed to go on and on.

“I was counting down the minutes until I could get back to class,” he says.

Suddenly, Gamache discovered the reason for the assembly: him. Surrounded by cheering students and colleagues, he was announced as the recipient of a Milken Educator Award, an “Oscar of teaching.” Bestowed annually by the Milken Family Foundation, the award recognizes promising young teachers with exceptional achievement, is presented to only about three dozen teachers nationwide, and comes with a $25,000 cash prize.

Since April of that year, Principal Elisabeth LaMotte-Mitchell had been working on the nomination in secret, enlisting teachers and administrators to collect evidence of Gamache’s outstanding work. That included student recommendations, samples of student writing, and videos of Gamache teaching and leading professional-development events.

“They compiled it all, coordinated with the state department, and sent it all in,” says Gamache. “It was amazing to hear that all these people had put in this work just to recognize me.”

Habans is the second New Orleans middle school that Gamache and LaMotte-Mitchell have helped turn around, rising from an F to a C rating in two years. In only the previous year, according to the Milken Foundation, “Habans had the highest academic growth of any open-enrollment elementary school in New Orleans, and Gamache’s cohort went from 55% to 73% in achieving basic proficiency and above.”

You don’t see these results without engaging kids, and that’s what Gamache does. As students finish reading a book, he sends them home with open-ended questions.

“The next day, they get in a big circle to discuss. I’ll talk as little as I can and just let them share out their ideas. It’s something they love,” he says.

“Most kids, when they come to me, don’t choose to read on their own time,” he adds. “So, if I can give them a really rich experience with the text, and they get into it and love sharing their ideas and building on each other’s answers, those are the best days for me. I just sit back and watch it happen.”

The key is relating books to real life. When students read “The Omnivore’s Dilemma,” for instance, Gamache has them bring in labels from the foods on their kitchen table.

“They’re like, ‘Look, there are seven different types of corn in this!’ and we talk about the effect of so much corn in your diet, the industrial farming system, where food comes from – all these things they’ve never thought about,” he says. “Everybody eats, so the reading matters.”

He works carefully with ESL and special-ed colleagues to support each student, whether a non-native speaker, a student with disabilities, or someone from an underperforming school. That can involve front-loaded vocabulary, audiobooks, or graphic-novel versions of texts to increase comprehension.

In addition, while Gamache agrees with the conventional wisdom that students should be proficient in basics like the five-paragraph essay, he knows that dry approaches can turn kids off. So, he spices it up with creative-writing tasks.

For example: Write your own version of a classic Greek myth. “Kids have a lot of fun with that, thinking about different time periods and places,” says Gamache. “It lets them express their creativity and have fun, but it’s also a really subversive way for me to see if they understand what the text was about, and if they understand how setting can have an impact on character.”

Oddly enough, the future Milken award winner didn’t always dream of becoming a teacher. As an undergrad at Fordham University in the Bronx, he majored in English because he loved literature. He started tutoring high-school students through Upward Bound, a federal government program that helps underprivileged and low-income students to improve their chances of entering and succeeding in college.

Although he enjoyed tutoring, Gamache says his decision to go into teaching was largely to find a job that would let him talk about books. The Troy native enrolled in the adolescence education master’s degree program at Saint Rose because it seemed natural for aspiring teachers.

He names Dr. Willard Washburn, Dr. Deborah Kelsh ‘79, and Professor Brian Bailey as important role models who impressed him with their focus on equity and social justice. When he began teaching, he found that Saint Rose’s emphasis on curriculum planning had given him an invaluable skill set.

Even so, the whole time he was preparing to become a teacher, Gamache didn’t really think about the kids.

“I knew I wanted to do something different every day, something I cared about. I cared about books, but I didn’t really go into it caring about kids,” he says. “I just thought, ‘This will be really cool and interesting for ME.’

“But then, you realize that there are other people involved,” says Gamache. “Not only could I discuss things that are important to me, but I got to do it with people that come with a wide array of different experiences, interests, and personalities.”

The call from NOLA

When Gamache graduated from Saint Rose in 2010, New York State had a glut of teachers, and he found himself competing with 200 to 300 applicants for a single position. He decided to make a clean break and move to New Orleans, “a cool city where I had some friends.”

He started teaching at a high school there, which was shut down for poor academic standing after a couple of years, and he moved on to Harriet Tubman Charter School, where LaMotte-Mitchell was director of curriculum instruction.

Gamache enjoyed his first experience turning a school around, but his wife was accepted into an urban-planning program at MIT. So, in 2014 the couple moved to Boston, where Gamache taught eighth-grade English.

When his wife was wrapping up her degree, Gamache heard from LaMotte-Mitchell, now principal at Habans. “She said, ‘I’d love for you to come back to New Orleans, and I’ve got a job waiting,’” he says. “I’d done it before, I knew what it entailed, and I knew how hard it would be.” 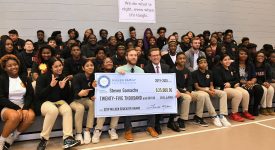 He also knew that New Orleans needed him more than Boston did.

“We’re dealing with a lot of stuff here; not just people whose families lived here for generations and were displaced by Katrina, but also the whole history of segregation, of slavery, in the South,” he adds. “Our schools are overwhelmingly African American here, and we are severely underfunded and underresourced.

The deck is stacked against them, and too many never have a chance. There’s the boy who was mistaken for someone else because of his dreadlocks and was shot and killed by the police. There’s the likable kid with a learning disability who dreamed of becoming an author. He moved away, and ended up shooting and killing his girlfriend and himself.

There’s the lovable goof who had suffered from lead poisoning as a child, because of the ancient water lines in the city. Gamache remembers him dressing up as an ultra nerd for the school’s Nerd Day. “We thought he had turned a corner,” he says. But the student’s grandmother pulled him out of school permanently.

Five years later, he was stopped by a police officer, and he had a gun. He shot and killed the officer.

“He was arrested, taken in, and beaten,” says Gamache. “I saw his bruised, bloody mugshot online and thought back to his trajectory.”

Gamache says he made the mistake of reading people’s comments after the news report. He saw readers calling his former student a monster. “It took everything in me not to engage,” he says. “I saw a kid who was the product of our city’s dysfunction that compounded the issues he already faced as a black male in this world.

“I’ll always remember him doing his snorty nerd laugh for the whole middle school. The pure joy on his face.”

“I have only one year with my kids, and then they’re off to high school and the rest of their lives,” Gamache says. “I work with middle-schoolers because they can still be influenced in terms of the paths they’ll take. A lot of times, it’s life or death – literally.”