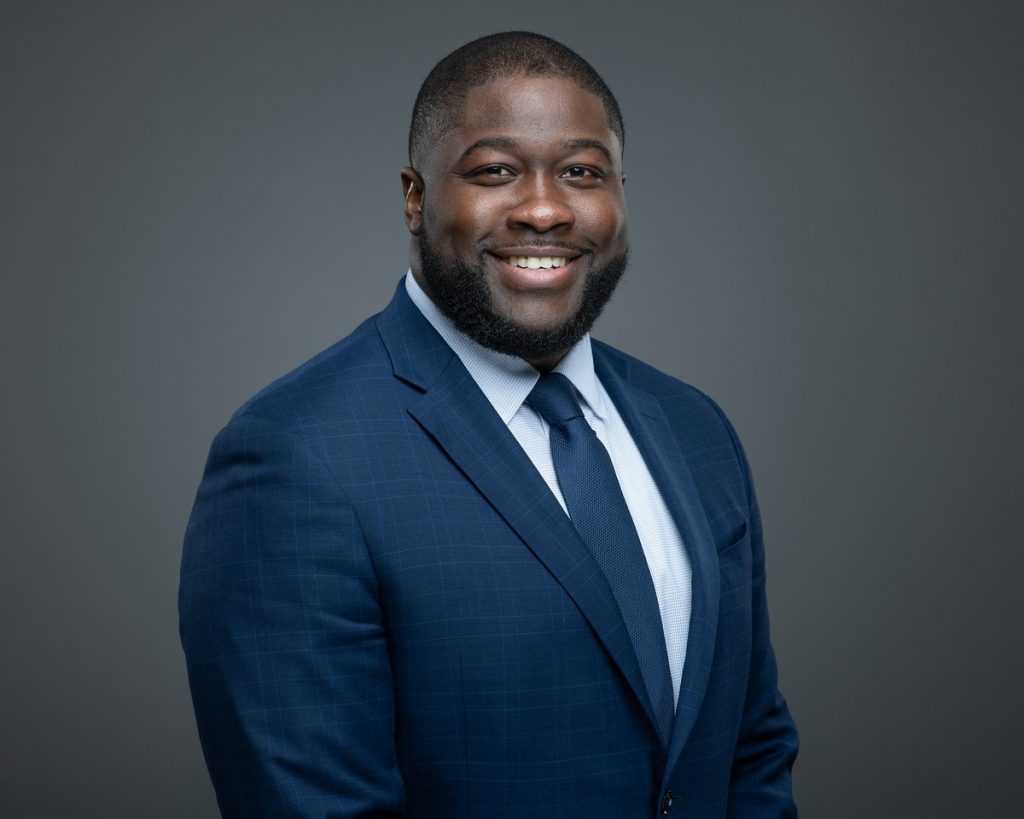 In 2013, Samuel Pierre ’14, G’17 was working as a unit support technician at Ellis Hospital in Schenectady, New York, finishing his bachelor’s in business administration at Saint Rose, and getting ready to start his MBA. Back then, if you’d asked him if he was interested in human resources, he probably would have said no.

Pierre hoped to do his required internship in operations, but Ellis didn’t have any positions available. So, at the suggestion of a nurse coworker, he became an HR intern at the hospital. When the internship ended, his employer offered him a full-time position as an HR associate.

Seven years later, he’s director of talent acquisition and HR operations for Ellis Hospital, reporting directly to the chief HR officer. And he loves it.

Something new every day

HR – which, simply put, is solving myriad problems having to do with people – suits him.

“It’s always something different every day, it never gets boring,” he says. “I really love HR.”

Pierre and his HR team fulfill multiple duties, including managing the hospital’s labor-relations program, ensuring that all employees are treated fairly, overseeing diversity and inclusion efforts, and working with recruiters to acquire and retain talent.

The hospital is currently in contract negotiations with the nursing union, so Pierre spends two days per week at the negotiating table. At other times, he might be following up on an issue – this could be in a lab, in food service, or elsewhere – pertaining to any of the hospital’s 3,500 employees.

“The managers reach out to me, and I partner with them to investigate what’s going on,” he says. “Based on the facts and information that’s available to me, I give them my recommendation of what we should to address the employee and the situation.”

At still other times, he could be addressing an issue with one of many regulatory agencies, such as the Office of Mental Health, Department of Health, or many others.

“Something can pop up on any day because an agency could be doing a survey, or researching a complaint,” Pierre explains. “I’ll get a notification that I’m a part of that team, and I’ll be looking up an employee’s files or credentials, for example.”

The onset of the COVID-19 pandemic brought a whole host of new challenges to HR professionals, especially to those in healthcare.

“My colleague in benefits had the worst impact, dealing with sick pay and COVID pay,” says Pierre, who himself had the unenviable task of furloughing employees. “Half our patients weren’t coming to the hospital, because the Governor had said we couldn’t do certain cases.”

In addition, Pierre and his team had to help staff with the fear of coming to work.

“We had to get them to understand that this was a safe place – you remember there was a shortage of personal protective equipment,” he adds. “I was part of that overall management team, listening to what was going on and helping where I could. I’m not a clinician, so I can’t address certain things, but I had an open door for managers to come in and talk.”

Talking to the C-suite

While Pierre lack formal clinical training, he’s learned a lot in his 12-plus years at Ellis. He also reads extensively, observes carefully, and has great mentors.

In addition, the MBA helps him stand out to the leadership team.

“I can show the leadership team that I have a general training in business and an understanding of how an organization is run, so I can be utilized as a partner when people come to me with issues or projects,” he says. “Strategic management, one of the MBA courses I took, helped me think outside the box and connect the dots.”

One example is the new applicant-tracking system that the hospital recently rolled out.

“I did research to get the senior team to approve our purchase of the system, showing the dollar amounts we would save by improving the recruitment process, lowering the cycle time, and improving the experience for applicants and hiring managers,” he says.

Ellis hires about 800 people per year, so the ability to automate resume review, keyword searches, communications with managers, and management of applicants from initial contact through interview frees up significant time for HR professionals.

“That gives us more time to be more proactive, go to job fairs, partner with nursing schools, and go to high schools and get students interested in healthcare careers,” says Pierre.

One ongoing challenge facing healthcare organizations is the shortage of healthcare workers. Hospitals in a given area find themselves competing for the same physician candidates, and often having to look overseas for specialists.

“How do we sell upstate to someone who can go anywhere in the world?” says Pierre.

The shortage of qualified nurses is another challenge. “People are living longer, older people tend to be sicker and go to the hospital more, and we don’t have enough employees to take care of them.”

He was very happy to hear that Saint Rose had restarted its nursing program.

“I think it’s awesome,” he says. “The more people we have going to nursing school, the more that’s going to help healthcare.”