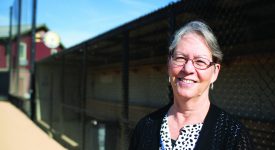 Among the greatest misconceptions about athletics is that the results can be quantified. Certainly, there are scoreboards. One team produces more points than the other, one team wins, and one team raises a trophy at the end of the season.

But when you’ve spent more than four decades shaping an athletics program, as Cathy Haker has during her tenure as athletics director at Saint Rose, the wins, losses, and all of the other statistics serve only as an outline for her legacy.

“Undoubtedly, the moment our women’s soccer team won a national championship in 2011, especially with them being on the precipice of that for several years, Brandon Birchak winning a pair of diving championships in 2007, and the many national championship competitions we have qualified for are among my fondest memories,” says Haker, who retired in June. “However, I’ll always really cherish the honest and the innumerable hard-working people I was surrounded by.”

A native of Delmar, New York, Haker was a standout on the field hockey, women’s basketball, and women’s lacrosse teams at Hartwick College. She had a deep aquatics background, and she was encouraged to apply for the women’s basketball coaching position at Saint Rose soon after she graduated.

“I am so thankful for the tremendous opportunity that Saint Rose offered me as a young professional fresh out of college. Little did I know at the time that I would spend my entire career at the College, with the ability and the support to grow an athletics program in so many ways,” Haker said at the time of her retirement.

“Cathy Haker grew the athletics program from infancy to a vibrant, competitive NCAA Division II member. Her legacy will impact every student-athlete, coach, and administrator who follows,” says Karen Haag, current head women’s basketball coach and senior woman administrator at Saint Rose. “She dedicated her entire professional life to Saint Rose, and I could not be more grateful for having the opportunity to work with her for a part of it. She is a great professional and a wonderful person.”

Much has changed at Saint Rose since Haker started out as the women’s basketball coach, including the nickname. The “Saints” served as the moniker before “Golden Knights” was adopted following a special student election. In addition, the campus did not have a gym, and so the men’s and women’s basketball teams had to figure out where to play and practice. 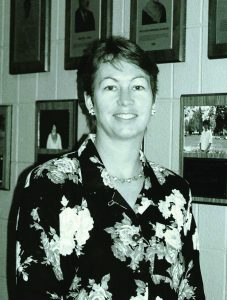 Regardless, her 1981 women’s basketball team qualified for the New York State Association of Intercollegiate Athletics for Women (AIAW) Championship in its first year of membership.

She says qualifying was only part of the story.

“What I was really proud of was how my five seniors all graduated with honors,” she says. “I have always been an optimist, but that graduation day really solidified my belief that if you are a good person and work hard, then good things will come your way.”

“I always believed that we could do great things here, and the growth of the athletics department and the College serves as a testament to that, but again, I was lucky,” Haker says. “Having successful teams is great, expanding our facilities and our intercollegiate programming is vital for the College to sustain growth, but our ability to impact young people is paramount to our mission.”

Haker cherishes the opportunities she has had to help students succeed. She says she was fortunate to be in a position where she could help students overcome challenges that are bound to come the way of any young person who may be on their own for the first time.

“It’s an indescribable feeling when an alum walks into your office and says thank you for helping them. I’ve had many who have had to leave school for one reason or another, but ultimately graduated and gone on to have meaningful lives,” she recalls.

These days, she is enjoying her time by taking advantage of being a new grandmother, catching up with some friends, and doing some work around her house, while not being bound by an alarm clock. She’s already been spotted in the stands, seeing the Golden Knights in action, where she’ll still have the opportunity to provide advice and make an impact on the people there.