After graduating with his B.S. in Criminal Justice, Behavior, and Law, Brian Xavier Willis '15 took a couple of counseling courses in the graduate program at Saint Rose before relocating for work. Combining a better understanding of human behavior with his background in criminal justice and law has allowed him to build relationships with those he encounters as a patrol officer in metropolitan Atlanta. 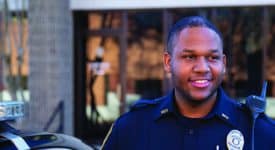 Less than a year and a half ago, Brian Xavier Willis ’15 first wore the dark-blue uniform of a police officer in metropolitan Atlanta, Georgia. But, even in that short time, Willis has been leading an exciting career – from serving on the security detail to help handle the one million visitors who descended on Atlanta for Super Bowl LIII, to protecting the city streets on his daily beat as a patrol officer.

“Sometimes in a hit-and-run you’ll have a license plate, or other clues. I’ll follow up on those types of leads by getting a description of the car or talking to witnesses,” says Willis. “We’re not detectives, and we don’t do what they do. But we’ll be given cases to help the detectives, and we’ll do the footwork they can’t spend time doing.”
Hit-and-run accidents are at record levels throughout the country, and Atlanta is no exception. “We have at least one a night,” says Willis, who’s had as many as 11 open cases at once.

“It’s what I like to do: take a handful of clues and come up with the person who’s responsible,” says Willis. “I have been a hit-and-run victim myself, and that’s devastating – having to deal with the pain, the damages, the insurance, and not having someone take responsibility for what they’ve done. We help people find the people who are responsible.”

A native of the Bronx, New York, Willis couldn’t have predicted he would end up 850 miles southwest of his hometown, in Georgia’s booming capital. He had originally hoped to join New York City’s famed police force, but without major connections or experience found it impossible to get his resume in front of NYPD recruiters.

He applied to police departments in a few states in the South and West, and quickly received an invitation to interview in Brookhaven, a suburb of Atlanta. He joined the force in November 2017.

“I love it,” he says. “Work is great. The only thing I don’t like is the traffic, and the pollen” (Atlanta has notoriously nightmarish traffic, and lots of pine trees).

Willis adapted quickly to the culture of his new town, where he finds that police officers are generally treated with more respect than they are farther north. “In the North, there’s more hate for the police. Here, they’re nice, they buy us food,” he adds. “It’s not us against the community.”

He had no trouble with Southern accents or slang, but discovered a new meaning of “respect your elders” in this part of the South.

A strong case for communication skills

Willis, who originally came to Saint Rose to study music, had to change direction when carpal tunnel syndrome prevented him from playing piano (although he continues to write and perform music, and frequently collaborates with Julien McCall ’16, the founder of Roundtable Records).

His second choice had always been criminal justice, so he transitioned to his new major without a hitch. That training prepared him well for his current duties – which include rigorous writing and reading. “We write multiple papers every night,” explains Willis. “You have to set up the scene, describe what’s going on.”

Excellent communication skills are crucial in creating court documents, he adds. “The district attorneys see that you’re articulate in explaining why you arrested this person; the scene is clear,” he says. “There are some officers who don’t have that kind of training and they can’t articulate these things in their reports. So it’s harder for them to present their case in court, even though they’re great officers.”

Another key Saint Rose experience was becoming an RA for three years. “That really helps in my work now,” says Willis. “How to talk to people, being given rules to follow and to enforce. And having compassion for people. It’s what I do now.”

Willis had stayed at Saint Rose for a couple of semesters after finishing his bachelor’s degree to take a few courses in mental-health counseling, which helped him develop another valuable skill set: intervening in crises. He discovered this when, as a new police officer, he took a 40-hour training in crisis intervention. He shot to the top of his class, receiving one of the top scores in his cohort. “After just a semester and half of courses,” he adds.

The subject of the training was dealing with people with mental-health issues who were in crisis. “We learned what questions to ask and how to ask them,” he says, explaining that the “how” is sometimes more important than the “what.” “Say you’re asking, ‘Do you have a plan to harm yourself?’ If you ask that first thing, they may not respond.”
Willis says that he will first work to establish a rapport with the person. “I’ll ask, ‘What’s going on in your life?’ and find out what they’re dealing with, and then start getting more specific,” he says. “We learned this at Saint Rose.”

On the job, that relationship-building talent has made a big difference to the people Willis has helped. “There are mentally ill, homeless people in the city who know they can talk to me,” he says. “They remember me talking to them. They’re glad they didn’t end it all that day.”