Most days, you’ll find Toshiko Tanaka ’63 working with her kindergarten students – whether picking flowers for traditional ikebana arrangements, playing Japanese and Western tunes on the koto, learning Japanese dance, or studying the finer points of the matcha tea ceremony. A veteran educator and Montessori Method expert, Tanaka is vice principal of the Maria Montessori Kindergarten in Kuwana, Mie Prefecture, Japan.

Ready with a warm smile and a kind word for everyone, Toshiko-san (“Miss Toshiko”), who celebrated her 81st birthday in February 2019, remembers her alma mater with deep fondness.

“I assure you that the honorable Saint Rose spirit, faculty members, and my fellow students brought me up to be a Catholic lady, mother, and career woman,” she says. “I’m always grateful and proud to be a graduate of Saint Rose.”

A combination of factors led the Japanese national to Saint Rose in the late 1950s. For one thing, she was primarily looking at schools in the U.S., encouraged by the positive experiences of a great-uncle who had been living in California for decades. For another, her pastor at church felt strongly that Saint Rose would be the perfect place for her.

In addition, Tanaka was attending St. Joseph’s Girls’ High School (Tsu, Mie Prefecture), which had been founded by four Sisters of St. Joseph in 1959, including Sister Rosemary Hoodack ’56, CSJ, and boasted a number of Saint Rose alumni on its faculty who encouraged Tanaka to attend their alma mater.

All signs seemed to point to Saint Rose. After discussing the matter with her father, a world-traveled diplomat, Tanaka decided to relocate to exotic Albany, New York, to pursue her studies in elementary education.

“Every day was wrapped up with countless unforgettable special memories in my four years at Saint Rose,” Tanaka says.

She recalls Sister Rose Cecilia, whom she would greet with a cheery “Good morning, Sister!” One day, the Sister asked her why she insisted on speaking “like President Kennedy.”

The Sister explained that President Kennedy, being from Massachusetts, did not pronounce his Rs. New Yorkers did not speak like him.

“Gradually it dawned on me that I must have said ‘Sistah’ instead of ‘Sister!'” says Tanaka. “Not only the Sisters, but my fellow students were so kind and thoughtful as to correct my English, and help me with other things. I have nothing but gratitude for them.” 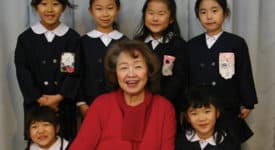 After graduating from Saint Rose, Tanaka taught for a year at a Montessori pre-kindergarten “play school” in Peekskill, New York. When she told a mischievous little student that he wouldn’t get a lollipop if he didn’t behave, he cheekily corrected her pronunciation.

“I may have said something like ‘rorripop,'” she says. “You mean a LOLLIPOP, Ms. Kanata?” asked the boy (“‘Tanaka’ must be difficult to say,” she adds).

Tanaka began teaching at the Maria Montessori Kindergarten in Kuwana the following year, 1964, and that same year worked as an interpreter at the Olympic Games in Tokyo. A decade later, she came back to the U.S. to earn a certificate in the Montessori Method at Notre Dame de Namur University (Belmont, California). She has been at the Kuwana school ever since.

In 1983, to Tanaka’s surprise, the city of Kuwana appointed her an English instructor at the local kominkan (cultural center).

“I hesitated to take the offer because I failed freshman English (a big red F!) – I had to try until my junior year at Saint Rose to pass,” she says.

However, when she found that the job didn’t require formal instruction so much as casual conversation, Tanaka was happy to accept.

“I had a great deal of nice friends through the job, and I often told them of my Saint Rose days, as they loved to hear about my experiences in the U.S.,” she says.

Humble to a fault, she downplays the achievement: “I was elected governor, and I just happened to be the first female one in Japan,” she insists. “It was really nothing special.” She stays busy, even on top of working full time at the school: In 2017, she traveled to Beijing to give a presentation on the Montessori Method to international educators.

As a Rotary Club member, Tanaka says she enjoys the ability to frequent the organization’s clubs around the world. She visited the Rotary Clubs in Albany and Colonie when she last visited the U.S. in 2013, when she attended HOME.COMING for her 50th reunion.

Tanaka wanted to attend the last reunion, in 2018, as well, but was prevented by a scheduling conflict.

“I’ll keep my health condition up so that I might be able to visit my alma mater for the next class reunion, thank God,” she adds. “May Our Lady smile upon you!”