Sanjay Shrestha wants to make the world a better place.

“The world is changing. The temperature keeps rising. And we cannot afford that – we have to leave this world in better shape,” he says. “It’s a must.”

Since graduating from Saint Rose in 1997, Shrestha, now 48, has dedicated his career to helping the growing energy industry evolve by implementing clean technologies wherever he works. Over the past two decades, he has brought his passion for creating a healthier environment to a number of businesses, including First Albany Capital, Lazard Capital Markets, FBR Capital Markets, and Sky Capital America. In 2019, Shrestha joined the leadership team of Plug Power, a Capital Region-based company focused on building a global green hydrogen economy.

And in November 2021, Shrestha was named Strategist of the Year by the Albany Business Review for his work as chief strategy officer and general manager of energy solutions at Plug Power.

But how did he get there?

Shrestha was born and raised in Nepal. His high school education there heavily influenced his desire to pursue his education in the United States.

“I really had this fascination about Wall Street and broader stock markets,” he explains.

While he didn’t fully understand the nuances of the financial industry yet, Shrestha knew he wanted to learn more, a major factor driving his decision to come to the U.S. This eventually led him to Saint Rose.

“It ended up being a perfect fit,” he says. 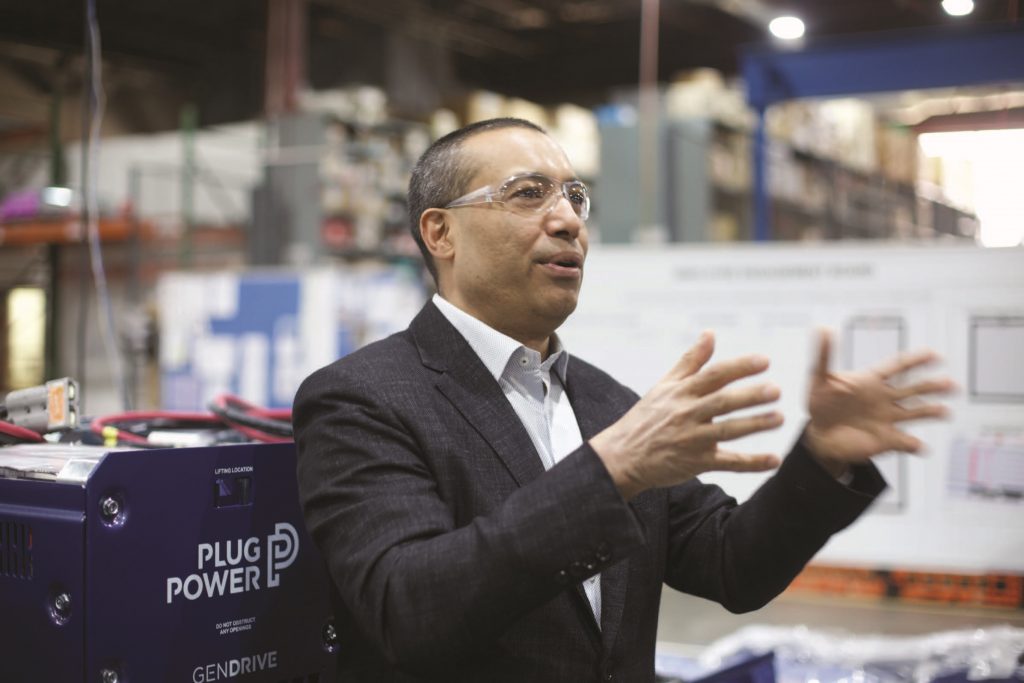 Although Shrestha graduated with a degree in finance, he spent a lot of time auditing classes from other departments, including marketing and computer science. While those classes certainly helped round out his education in a more holistic way, Shrestha says he credits the College’s internship program for giving him a taste of the “real world of finance” rather than what is taught in the classroom. His first internship was in the Cohoes Savings Bank’s marketing department.

That internship ultimately led him to First Albany Capital, where he spent seven years expanding the firm’s presence in the broader clean tech and renewable energy infrastructure industries.

Shrestha also remembers the care and attention his professors gave him as a student at Saint Rose and how accessible they made themselves to students like him. While working on a project with another student, the professor invited the students to their home to finish it and provide additional support.

While there wasn’t a direct relationship between what Shrestha studied at Saint Rose and his eventual foray into the world of green technology and renewable energy, he says the support he received from his professors and internships helped build his confidence, which was instrumental in the steps he would take for his career after graduation.

“At the end of the day, what you learn in the academic setting gives you the foundation,” he says. “You’ve got to go out and really build a network and do the real work to get to where you want to be from a professional standpoint, and one should always follow their passion.”

After graduating from Saint Rose, he worked for an investment research firm in Albany, CL King and Associates, but he knew he wanted to do more and had been looking at ways to get into a larger investment bank in Manhattan.

He remembers calling First Albany every Friday around 3 p.m. to see if it had any job openings. Eventually, a new position opened in the company’s Boston office, but there was a catch: “They said, ‘What do you know about fuel cells?’ Now, don’t forget – this is October of 1999,” Shrestha recalls. “I said, ‘Well, not a whole lot, but I’m pretty sure I can figure it out.’”

At the time, he explains, the industry was in its infancy, and a commercial trajectory had yet to be defined. While there was a general excitement surrounding the potential of renewables, including fuel cells, no one really knew the true potential that hydrogen fuel cells would eventually have on the global energy industry. Plug Power, his future employer and leader of the industry, had just become a publicly traded company and had shipped it’s first fuel cell systems for the backup power market. Shrestha says he was also given the opportunity to cover the internet, but he decided clean tech was the route for him.

“We are all living in an exciting time in history, and the work we do makes this world a better place. Green hydrogen can displace diesel, similar to how electricity displaced kerosene.”

“There was so much to be done, so much to learn about,” he says. “You want to be one of the pioneers in that sector rather than be just another internet analyst at the time.”

And that sector continues to grow, thanks to the work Shrestha and the leaders at Plug Power are doing today. After more than 20 years, Plug Power has become a global leader in the industry, focused on building a global green hydrogen economy serving major global customers, including Amazon, Walmart, and BMW. The company is currently building the world’s firstof- its-kind green hydrogen generation network in North America to make green hydrogen ubiquitous and economical.

In addition, Plug Power has expanded its presence on a global basis with multiple strategic acquisitions and partnerships. Green hydrogen and fuel cell applications have the potential to serve 20% of global energy needs and help decarbionize many industries, including power, transportation, and industrial applications. This is expected to be a $10 trillion industry with one of the biggest mega trends in energy transition, and the work Plug Power is doing makes this energy transition not just possible but achievable, Shrestha says.

“We are all living in an exciting time in history, and the work we do makes this world a better place. Green hydrogen can displace diesel, similar to how electricity displaced kerosene,” he says.

This is what makes Shrestha so passionate about the work he does on a daily basis.

“Transition, transformation, and disruptive technologies are never easy,” he says. “You have a lot of big players that have operated in some sort of an oligopolistic kind of environment.

But this is where we’ve done something very different as a company. We really created the first viable commercial market for hydrogen fuel cells and now are focused on building a global green hydrogen ecosystem. We will emerge as the industry leader in this unfolding energy transition.”

When it comes down to it, though, Shrestha and his team just want to do what is right.

“We’ve been able to do something that I think is a matter of such pride,” he says. “I can’t think of doing something other than what I’m doing right now. If you haven’t figured it out, I guess I really like what I do.”