Colleen Quaglia ’22, an accounting major, has been swimming competitively for most of her life. Now the school record holder in multiple races, including the 50-, 100-, 200-, and 500-yard freestyles and the 100- and 200-yard butterflies and breaststrokes, Quaglia has stepped up as the team captain of the Saint Rose women’s swim team. After receiving an extension of her athletic eligibility due to the pandemic, Quaglia is getting ready for what comes next after she graduates in the spring.

What has your experience on the Saint Rose team been like?
It’s been awesome. I love the team so much. And I love the fact that we get to train with both the men’s and women’s teams, because it’s different than what I’ve done most of my life – because most of my life, I’ve been swimming with just women. I’ve really enjoyed every single second I’ve been on the team here because it’s just a lot of fun. But we also work hard, and we all have the same goals in mind.

You’re a senior and you’re also the team captain. What’s that been like?
Being team captain is fun. There’s a lot of challenges sometimes, but it’s a lot of fun being captain. I like to think that I’m a natural born leader, so I like to lead the team. I can be like, “Alright, we’re gonna go hard today during practice,” or, “We’re gonna have fun today at practice.” It’s fun being able to create a good environment.

As somebody who sees herself as a natural born leader, do you have anybody who has really influenced you?
My mom has influenced me a ton. She’s always taught me to stand my ground when I feel like I need to and to make sure that I’m leading the team in the right. And then for swimming, Michael Phelps is one of my favorite people. I’m inspired by him. Everything that I do, I always think about, “What would he do? How would he feel about this situation? Both in the pool and out of the pool, how would he handle this situation?” That’s something that I’ve always been really focused on, too.

How do you prepare for a meet?
I like to have fun! I goof around a lot. If I don’t goof around, I get in my head too much. I just have to make sure that I’m focused. I fool around with my team. We like to dance before meets and have a good time. We always joke around in the locker room. I always joke around on the pool deck. Our team is definitely the most fun team, I think. We’re always the team that everyone’s always laughing at. I don’t know if that’s a bad thing or not, but we have fun. What was it like competing at the NCAA Championships? It was fun. It’s just an amazing experience just in general to be able to be invited to go to swim there. But it is hard when you don’t have your team there, because my team has pushed me throughout my entire career. I wouldn’t be anywhere without my team because they push me in the pool, and they push me out of the pool. They helped me also mentally, because being there alone is so enclosing sometimes, so you miss your team. But being there just as a swimmer, it’s an incredible experience because you get to be around so many great athletes, which is an awesome experience. I really enjoyed every single second of it, because it’s fast swimming, and that’s what I love to do.

What do you think swimming has taught you about yourself?
It’s definitely taught me that I’m a hard worker, and I can push myself past points that I didn’t think I could. [Swimming] is my stress reliever, so it’s [taught me to] take life not as seriously all the time. It’s taught me time management, too. I would probably not be the student or the athlete that I am today without the time management that swimming’s taught me, because if I’m not on schedule, I get out of whack. It does teach you life lessons, too, which I think is really valuable because I’m leaving Saint Rose not only as a better swimmer, but as a better person. 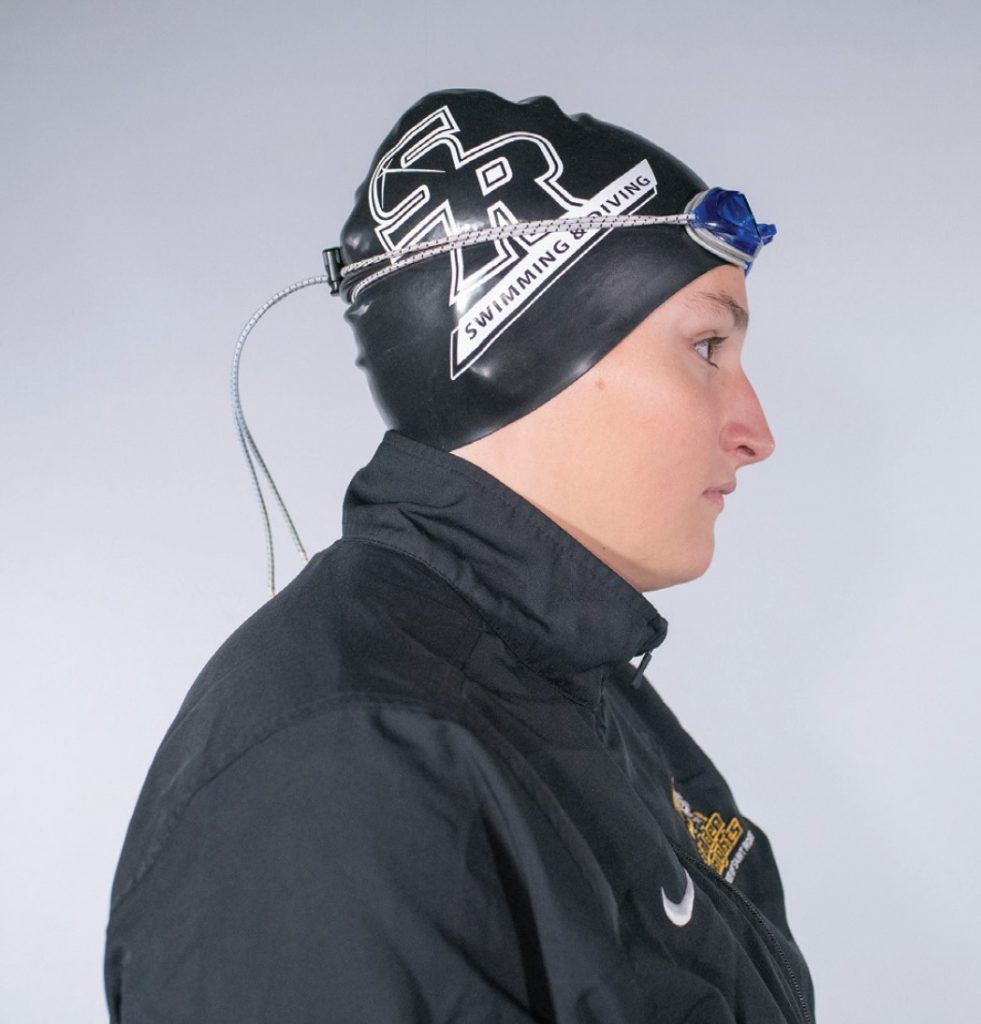 Lane 2 is my favorite lane to practice in because I started practicing in that lane my freshman year and I have always enjoyed training in that lane. A lot of Saint Rose greats and my friends trained with me in that lane.”

How did the pandemic disrupt your swimming season?
Actually, COVID hit when I was at nationals in 2020. I was supposed to swim the day after they canceled the meet – they canceled the meet on a Thursday, and I was supposed to swim on a Friday. [I thought], “I can bounce back from this. Next year is going to be my year.” And then obviously, [everything] happened, and we just had to practice, and there were no meets. That was really hard. When the new kids came on the team, it was really hard for them to transition because usually where we bond the most is on the pool deck, and at the meets, and when we go on training trips, and we couldn’t do that last year. It was definitely difficult to try and figure out, especially as a leader on the team, how I could incorporate them into the team. Thankfully, Saint Rose let us in [the pool] last year, so we were really happy that we could keep swimming because it would have been hard getting back into it after a year off.

What did you do to stay positive?
We did a lot of Zoom meetings, and we found games and apps [on our phones] where you didn’t have to be next to each other to play. We would do team-building exercises over Zoom, and we would do fun little Instagram shout-outs to try and get people to know each other more. That was our big issue. We couldn’t get to know each other as well as we used to. When we were in practice with the five people you could be in practice with, we tried to get to know them as best as we possibly could. And then we would tell our other close friends on the team about the people and then [relationships] were able to grow from there.

Your sisters (Danielle ’17 and Karen ’19) both went to Saint Rose. Did that influence your decision to come here?
A little. When I was younger, my swimming coaches all went to Saint Rose, and they were coached by Keith. They had a similar [coaching dynamic] to Keith [Murray, the former coach], because obviously, you learn from your coaches. I liked how they all coached me and figured that Keith would have the same coaching pattern, which he does, because they all learned it from him. But with my sisters, they both came here. Karen wants to be a teacher – that’s why she came here. And then she joined the diving team. That definitely helped my decision because I was like, “Oh, she knows the team, and she knows that it’s a fun time, and that it’s a good environment to be around.”

What has the academic side of things been like for you?
I love the academics here at Saint Rose. I just love all of my professors. I have good relationships with them. Most of my professors I would consider my friends, which I know sounds lame, but I have really good foundations with all of them. I go to their office hours all the time, I ask them questions, and when I get confused on something, I go to them immediately. My favorite professors are the accounting professors, because I’m an accounting major, but Frank Venezia, Barry Hughes, and Scott Jerris, they just taught me so much, and I’m so thankful for them. I’ve learned so much in all of my classes, and I feel so much more knowledgeable now than I was before.

Why did you choose accounting?
I initially chose accounting because I knew I wanted to go in the business world, but I didn’t know exactly where. I just didn’t see myself in marketing.

If you could give one piece of advice to incoming students, what would it be?
Honestly, just have fun. College is stressful, but I think being able to balance out having fun and being stressed is something that you have to learn, like that time management aspect of it. If you’re stressed all the time, you’re not going to have fun in college – it’s just going to be really hard and boring. And having fun is super important. Even if it’s just going to the movies or seeing your friends and hanging out with them, the simplest thing can make your day 10 times better. practice in because I started freshman year, and I have always of the Saint Rose greats in that lane.” – Colleen Quaglia