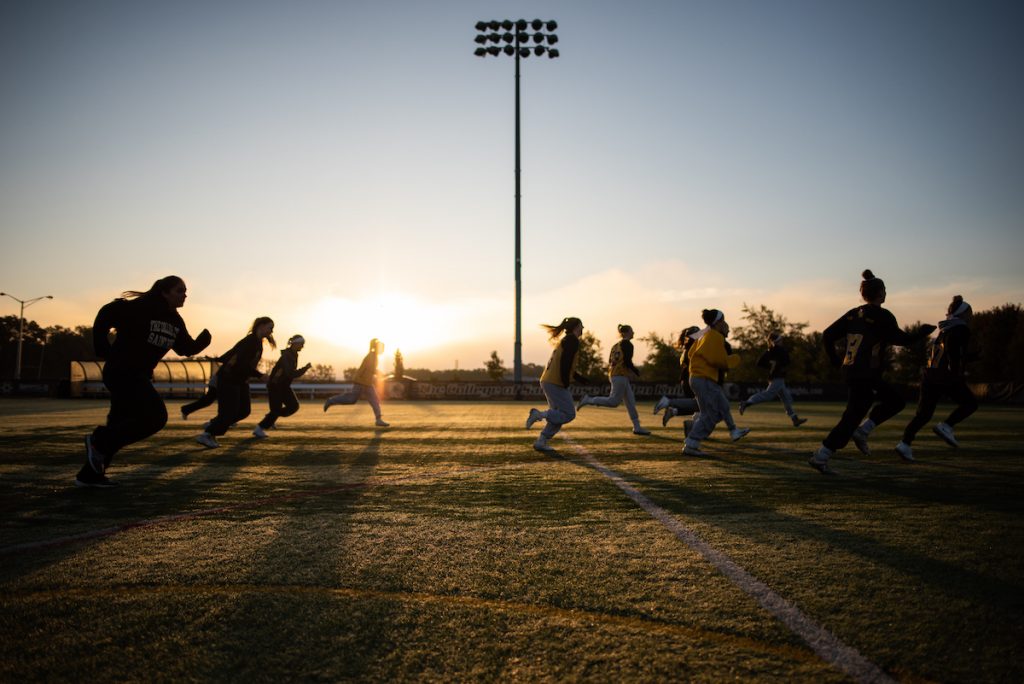 Just before delivering the 2006 Saint Rose commencement address, business mogul Joseph Plumeri learned that beloved baseball coach Robert Bellizzi had, days earlier, succumbed to cancer. He heard that Bellizzi, whom he’d never met, had long dreamed of a dedicated ballpark for the program he founded and shepherded.

A man known for strong emotions, unscripted speeches, and a love of baseball, Plumeri stunned his audience by pledging $100,000 toward an athletic complex, if donors contributed an equal amount.

“Like everyone in attendance that day, over 10,000 I recall, I was bowled over,” said then-President R. Mark Sullivan. “What a special moment — especially in the presence of the Bellizzi family — including (Bellizzi’s) daughter, who received her degree that morning.

“Once the applause died down, I recall announcing to the audience, ‘Joe, you can come and be our commencement speaker any time you wish,’” he added.

Plumeri’s challenge, and $1 million gift, led four years later to the Christian Plumeri Sports Complex, named for his late son. Carved out of a city park three miles from campus, the site is home to Saint Rose baseball, softball, women’s and men’s soccer, and lacrosse. And Saint Rose shares the facility with Albany leagues, camps, and clinics.

Typical afternoons find Golden Knights teams in uniform practicing drills as local athletes play pick-up soccer or lacrosse on an adjacent field, often well into the evening. It is the very scene Plumeri had in mind when the complex opened a decade ago.

“Supporting this worthwhile project allows me to combine two passions: giving back to the community and baseball,” Plumeri said years ago as the plan was taking shape. “I think we should build monuments to the things we believe in, and this is a fantastic opportunity to build one celebrating the dreams and potential of Albany’s youth.”

Since the complex went up in the shadow of the Empire State Plaza, the number of College teams has grown, along with the titles and awards. Saint Rose has built a fan base. And recently, the fields have provided respite during the pandemic. “Energized, hopeful, excited, and proud” are the first impressions Director of Athletics Lori Anctil often hears.

“The state-of-the-art fields are a major focal point in recruiting,” she said. “And they contribute to countless victories, celebrations, and some of the most memorable moments for our Golden Knights.”

Today, student-athletes accustomed to hopping in the campus van to get there don’t know a time when that was not possible. But they appreciate what they have: the press box, seeing their families in the stands, playing under the lights, and high-quality dirt on the softball field.

“When you play a sport at Saint Rose, you join a family, and this complex totally does that,” said softball infielder Savanna Liverio-Tyler ’21. “You can jump from game to game to game when you come here. When you support softball, you support all of us.”

As president from 1996 to 2012, Sullivan built or updated academic and residential spaces across campus. Like Bellizzi, he was eager to find a home for outdoor Golden Knights teams. The softball and baseball cultures were strong. Soccer was building momentum toward the women’s 2011 NCAA title. Lacrosse would soon arrive.

But teams played on borrowed fields of varying quality, limited by schedules of the school or club that owned the property. The nomadic existence was less than ideal.

Acreage near the urban campus was hard to come by. To Sullivan, locating in a suburb never felt right. 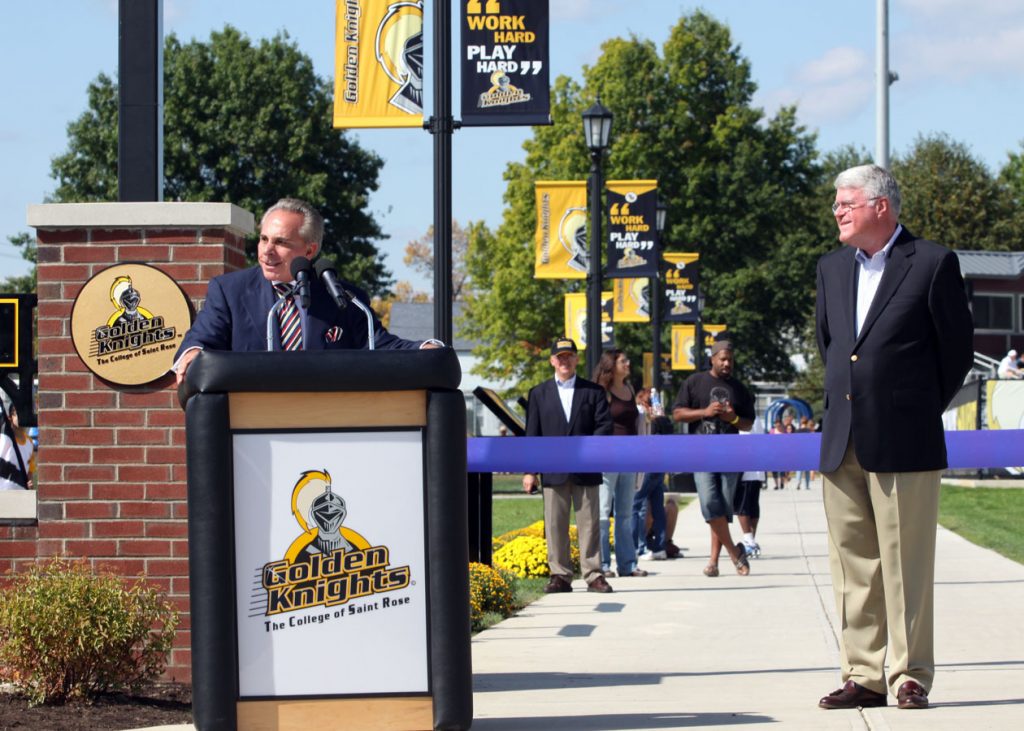 Finally, he and a core of alumni targeted the slightly worn Hoffman Park, on Albany’s southern edge.
Sullivan, who had strong ties to the city, proposed a city-college partnership to then-Mayor Gerald Jennings. Then, the College worked doggedly to build a facility outfitted not only with fields and a stadium, but also a patchwork of walkways for walking and cycling.

The lease agreement was approved. Then, Plumeri pledged support for Bellizzi’s dream. Like the coach, the New Jersey-born businessman came from humble roots and grew up with baseball. Since becoming wealthy in finance, he had devoted much of his philanthropy to the game. His family was with him in September 2010 to dedicate the Saint Rose facility.

“It was a beautiful day marking so many milestones, including an excellent example of town/gown relations, the memory of one of the College’s most revered coaches, and the generosity of special friends who understood the importance of sports to develop not only college athletes but the neighborhood in which they perform,” recalled Sullivan.

Today, the complex embodies the College mission by serving Albany. It pays respects to Plumeri’s son and honors the Sullivans with a soccer and lacrosse field in their name. There is Bob Bellizzi Baseball Field, a permanent reminder of what he stood for.

For her players, Gutheil noted, success at Plumeri was immediate and sustained. In its first season, the team was undefeated on Sullivan Field. The tally after nine seasons: 87 wins, 12 losses, and eight ties.

“We had achieved national prominence after going to Final Fours in 2008, 2009, and 2010,” Gutheil said. “Dr. and Mrs. Sullivan understood how important it was to have our own athletic facilities. Now, after 15 years of hosting games throughout the Capital Region, we are blessed to have our own HOME.”