Go beyond the games with Wari Isaac '20, a men's soccer player and business management major from Nigeria. 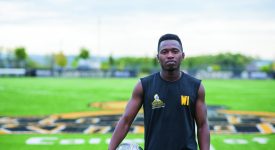 Wari Isaac ’20, a business management major, has played soccer since he was a young child in Nigeria. The MTN Scholar was one of 11 players — chosen out of more than 15,000 soccer players — to attend school in the United States, where he ultimately landed as a midfield/forward on the men’s soccer team at Saint Rose.

What was it like growing up playing soccer?
Nigeria is a really big country for soccer. It’s either you find someone playing soccer or see people watching soccer. My entire family is just all about soccer.

How do you prepare for a game?
I was born and brought up in a Christian home. So, a lot of people listen to hype music, but for me, I listen to gospel music. I put on my headphones, I listen to that. It calms me whenever I listen to it, and that gets me in the mood, getting ready to play a game. And I also pray before I get onto the field.

What has soccer taught you about yourself?
If you realize what you’re good at, you should focus on that because that can bring you somewhere. I’m not a great student, but if I were to just focus on education alone, I don’t think education would have brought me to the U.S. But because of soccer, I got a scholarship to be able to come to the U.S. (Isaac has been named to the Northeast-10 Conference Academic Honor Roll every semester during his time at Saint Rose.) 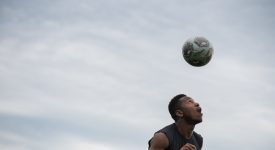 What does it mean to be part of the MTN Scholars?
MTN is the largest telecommunications company in Africa. They came out with this soccer (program) – we call it football in Nigeria – where every kid can go and try out. So, the program went to five states in Nigeria. Over 15,000 people participated in the trial. So at the end of the trial, 11 of us were selected out of over 15,000.

So, with the MTN Scholarship, did they place you at Saint Rose or did you pick Saint Rose?
MTN was able to find a soccer coordinator from the U.S. who went to Nigeria and helped us connect with other soccer coaches in the U.S. My high school, which is Proctor Academy (New Hampshire), recruited me for soccer, so I went to Proctor. I did two years of high school there. Coach (John Ciano) recruited me to come over (to Saint Rose). That’s when I first heard of Albany. 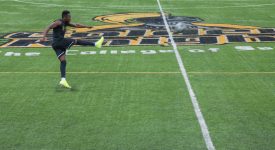 Tell us about your internship at Ayco.
I work with the wealth strategies department. Basically, helping people manage their money, so that their family doesn’t lose anything after they pass away. I find that really interesting because it’s one thing to make money, and another thing to be able to maintain your money for your family to enjoy it after you pass away.

What are your plans for the future?
Sometimes they say you have your own plans but life could go either way. But I would love to work for AYCO right after college. If I work there with amazing people and get experience, but also make an impact in the company, then I’ll have more support there from people, too, and hopefully start my own company in the future. That’s my ultimate goal.

Will soccer always be part of your life?
When I’m successful, I will buy a soccer team. That’s my goal. I enjoy working with kids. I remember when I first came to the U.S., I worked with kids. I taught soccer in Wisconsin, which was a great experience, honestly, probably one of the best experiences I’ve ever had. I am looking to not fully go into coaching, but when I create free time, just help out with kids and coach because I enjoy doing that.