Jesús Valbuena Garcia ’93, a professional communicator based in Madrid, likes to advise aspiring writers that the best storytelling happens through “story doing.” For the past 15 years, he has been “doing” a story he was born to tell: He recently completed a documentary about his great-grandfather’s part in the Siege of Baler (1898-1899).

It’s a story Valbuena grew up hearing from his family: Holed up in a church in a small town in the Philippines, Corporal Jesús Garcia Quijano and about fellow 50 Spanish soldiers withstood hundreds of attacking Filipino rebels for 11 months. Although decimated by disease, starvation, and casualties, the regiment finally surrendered only after learning that Spain had already conceded the war.
Inaugural Philippine President Emilio Aguinaldo hailed them as respected friends, rather than enemies, and guaranteed their safe passage back to Spain. “Because of that safe conduct, Quijano was able to have descendants, including me,” muses Valbuena.

The tale of the siege and its heroes had fallen into obscurity, perhaps because it represented the Spanish Empire’s final defeat in the New World. Quijano was buried in an unmarked grave. “I always dreamt of paying him a tribute, making his story known,” says Valbuena.

Planting the seed for a labor of love

Upon first visiting Baler in 1994, Valbuena was moved at the thought of the difficulties Quijano survived for nearly a year. “He was the same age I was at the time,” he says.

It was then that the seed was planted for his documentary, “The Last of the Phillipines: Return to Baler,” which he premiered in the Philippines this past June. The 45-minute documentary can be rented online.

“It’s a story of endurance, surviving through adversity, humility in victory, and dignity in defeat,” he says. “It’s a war episode without winners or losers. It’s a parable about humanity.”

Valbuena, who manages marketing communications for one of the world’s largest providers of infrastructure services, had always dreamed of creating, producing, and distributing a documentary. About 10 years after his first visit to Baler, he began the project in earnest: He plunged into research, tracked down descendants of the Filipino and Spanish participants, and traveled to the Philippines to interview and film.

The first cut clocked in at 83 minutes. “When I watched it, I thought of Blaise Pascal’s quote about writing such a long letter because I didn’t have time to make it shorter.”

But encouragement and inspiration arrived from an unexpected quarter. Valbuena happened to meet his favorite singer, Manila-born Luis Eduardo Aute (“like the Spanish Bob Dylan”), and told him about the documentary. Aute counseled Valbuena to rewrite the film, assuring him that rewriting was an important part of the creative process. “I said, ‘I’ll rewrite it, but only if you’ll be the narrator,’” Valbuena recounts. “So the final version that I just launched is narrated by Luis Eduardo Aute, who also interprets the theme song.” 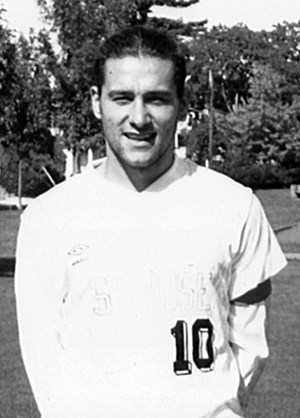 Jesús Valbuena Garcia ’93 as a student at Saint Rose.

Culture Shock, and Faith in Jesús

Although the project required developing some new skills, Valbuena’s quarter-century as a communicator had given him the requisite storytelling skills and experience. “I love the job of empowering people through stories,” he says. “That love for storytelling was part of the training I got at Saint Rose, which gave me the foundation to be a well-rounded communications professional.”
He first came to Albany as a soccer-playing high school senior in the late 1980s. A high school teacher in his hometown, Alcalá de Henares, alerted him to an opportunity to play soccer at Colonie High School.

One of his hosts was the family of Saint Rose professor Rich Medved, who invited Valbuena to campus to meet President Lou Vaccaro. “They were very open to me having financial aid, playing soccer, and studying at Saint Rose,” Valbuena says. “Coming from a low-income family, I never would have imagined attending college in the States.”

The first few years weren’t easy, as the teenaged Valbuena found himself far from home, physically and emotionally, trying to adapt to a strange culture that prized rugged individualism and judged failure harshly. He worked two jobs at Saint Rose, making pizzas in the Camelot Room and assisting the soccer coach.

“At times, I missed my family, my language, my roots. I had to work, play soccer, and carry 18 credits. And the weather was very cold,” he admits. “I had learned English in Spain, but in college, I had to write many papers and deliver speeches in the front of the classroom – it takes a lot as a foreigner to do that.”

By junior year, however, Valbuena had hit his stride. In his senior year, he ran for Student Association vice president of communications – something no international student had ever done.

“My campaign posters said ‘Have faith in Jesús,’ and ‘Trust Jesús,’” he recalls. “The legendary Sisters of St. Joseph of Carondelet asked me, ‘Are you being impolite with Jesus?’”

A World of Opportunity

Now a member of the College’s International Advisory Board, Valbuena adds that his time at Saint Rose was a “world-opening” experience, as he became friends with students from Latin America, Europe, and Asia. He also met a student from Iowa, Matt Allen ’92, with whom he traveled to El Salvador, Mexico, and Honduras to do volunteer work.

After graduation, Valbuena and Allen taught English together in China, and journeyed to Baler in 1994. “Although he’s as American as apple pie, he is one of the most international, open-minded people I’ve ever met,” Valbuena says. The two remain best friends today. “I am so grateful to Saint Rose for so many things,” he adds.

Valbuena credits Saint Rose with helping him become the best version of himself: a high-performer in academics and sports, and a caring person who takes ownership of his mistakes and is grateful for the opportunities he’s received. He also sees himself continuing the legacy of his great-grandfather and namesake. “I do consider myself a survivor who doesn’t give up, who wants to see justice done – and who tries to do something to make it happen.”