A new Women’s Leadership Institute, envisioned by President Carolyn J. Stefanco and backed by alum Michelle Cuozzo Borisenok, honors our roots and opens up opportunity for a new generation of women leaders at Saint Rose. And the first group of BOLD Women’s Leadership Network Scholars will help lead the way.

“I am incredibly moved to play a part in creating the new Women’s Leadership Institute at Saint Rose,” Michelle Cuozzo Borisenok said as she stood behind the podium surrounded by television cameras during a news conference in February. “By providing the ability to interact with other women as mentors, the institute will give our students the confidence to move forward with their passions and help them understand that they can achieve anything that they set their mind to do.”

Just before Borisenok spoke, Saint Rose President Carolyn J. Stefanco had announced the $1.2 million gift by Borisenok, a 1980 graduate of Saint Rose and member of the board of trustees, and her husband, Walt. The funds were for the renovation and expansion of 1020 Madison Avenue, which starting in August, will serve as the site for the new Women’s Leadership Institute and the home of the BOLD Women’s Leadership Network Scholars during their senior year. The building, a 3,800-square-foot living-learning center that will serve the Saint Rose community and the wider region, will be named the Michelle Cuozzo Borisenok ’80 House.

The Women’s Leadership Institute, with offices on the first floor of 1020 Madison Avenue, will host conferences, workshops, and speakers who visit campus from all over the globe. Although the programming is still under development, the institute will address such topics as moving the needle on women in educational leadership; women in healthcare leadership; women in legal careers; equity in the workplace; and the role of mentoring in helping women rise.

The gift is important in many ways. As Borisenok pointed out, in her call for others to follow her lead, it is important for alumni to give back. As a first-generation college student who commuted to her business administration program at Saint Rose from Troy, Borisenok said her experiences at Saint Rose were life-changing. Borisenok didn’t ever see herself at a four-year college until her family encouraged her to try. She went on to become an entrepreneur, in most recent years founding a women-owned horseracing syndicate and breaking down gender barriers in the male-dominated sport.

“Starting a business from scratch, balancing a family and a career, or turning a path forward in an historically male-dominated industry – these are all possibilities that are within reach as long as you believe in yourself,” Borisenok said.

The gift promotes a vision Stefanco, an expert in women’s leadership, brought to Saint Rose while tying back to the founding of the College in 1920, when it was opened by the Sisters of St. Joseph of Carondelet to provide equal access to higher education for women. And in a time when women are finding their voices through the #MeToo movement and record numbers of women entering Congress, it has resonated with women students, who are seeking to graduate from Saint Rose and become change-makers in their career fields and communities.

Stefanco credits a female social studies teacher with encouraging her to point herself toward something bigger than secretarial school. Also a first-generation college student, Stefanco battled through gender bias and sexual harassment throughout her academic career, from her time as a student, to a professor, and finally breaking through the glass ceiling of the college presidency.

“What enabled me to persist, and to eventually rise through the ranks of higher education administration, was a fierce commitment to lead change so that others who have been denied access, opportunity, and advancement could realize their potential,” Stefanco said.

In April 2018, Saint Rose announced that Stefanco was awarded a $100,000 Helen Gurley Brown Genius Grant, and Saint Rose was invited to join the BOLD Women’s Leadership Network by the Pussycat Foundation, an organization named in honor of journalist Helen Gurley Brown, who favored the term. The $1 million in BOLD Women’s Leadership Network funding to Saint Rose will empower a diverse group of scholars – young women leaders enrolled at a select group of institutions of higher education – to address important issues in their communities.

Including Saint Rose, the BOLD Women’s Leadership Network currently operates at six colleges and universities: Ithaca College; Middlebury College; Colby-Sawyer College; the University of Connecticut; and Rutgers University–Newark. Each partner institution is led by a woman president who has demonstrated a commitment to diversity and inclusion throughout her career. 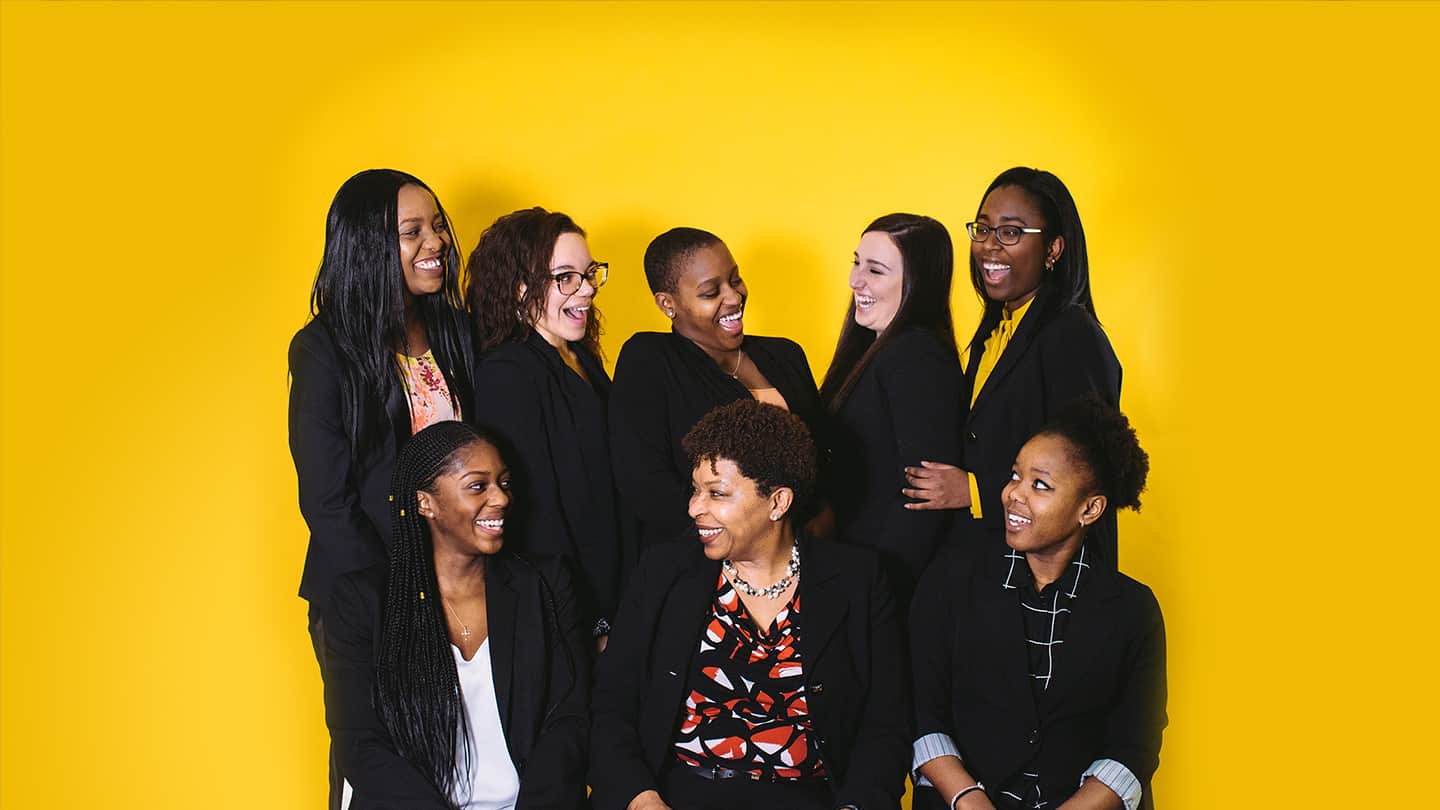 The seven inaugural BOLD Scholars, who will live on the second floor of the Michelle Cuozzo Borisenok ’80 House, were introduced during the February news conference. Mobbed by reporters after the event ended, the women talked about being inspired by Borisenok’s generosity and their desire to be give back one day when they move from being Saint Rose students to Saint Rose alumni.

“To be able to be like Michelle and to be able to implement change and create change in different areas and different arenas across the world? Amazing,” said BOLD Scholar Janay Salter, a childhood education major from Harlem.