About The Michelle Cuozzo Borisenok ’80 House

The Michelle Cuozzo Borisenok ’80 House, a 3,800-square-foot living-learning building located at 1020 Madison Avenue in Albany, is the hub for the Women’s Leadership Institute. The first floor contains a conference room, offices, and gathering spaces, and the second floor serves as the residence for the senior cohort of BOLD Women’s Leadership Network Scholars.

The Michelle Cuozzo Borisenok ’80 House hosts workshops, seminars, and other gatherings and draws visitors who wish to hear from leaders throughout the Capital Region, the United States, and the world on the topic of women’s leadership.

The building is named for Michelle Cuozzo Borisenok, an entrepreneur and 1980 graduate of Saint Rose with a bachelor’s degree in business administration. Michelle Borisenok and her husband, Walt Borisenok, funded the renovation of the space with a $1.2 million gift.

About Michelle and Walt Borisenok

Michelle Borisenok’s gift to the College of $1.2 million funded the renovation of 1020 Madison Avenue, the site of the Women’s Leadership Institute and home to the senior cohort of BOLD Women’s Leadership Network Scholars. The building has been named the Michelle Cuozzo Borisenok ’80 House.

Michelle Borisenok, who graduated from Saint Rose in 1980 with a B.S. in business administration, is an entrepreneur and philanthropist, known throughout the Capital Region for her steadfast support of women’s leadership. Her love of equestrianism and passion for advocating women’s leadership fueled her latest venture, Brown Road Racing LLC,
which brings women together to learn about racing and share in the camaraderie of horse-ownership partnerships. 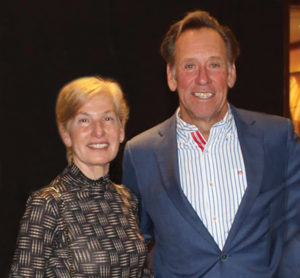 Walt Borisenok holds a B.S. in microbiology from the State University of New York at Plattsburgh. He worked in various positions in the pharmaceutical and food industries, including at Wyeth-Ayerst and the German-based Milupa Corporation.

In 1986, Walt Borisenok founded Fortitech, which developed and manufactured nutritional products for the fortification of food and pharmaceuticals. Fortitech grew into a global supplier with four business units and seven manufacturing plants worldwide. The company was acquired in 2012 by the Dutch-based life science company DSM.