Travis Grossman wasn't ready for college the first time he tried, as an 18-year-old in California. But almost a decade in the Navy helped him realize what he really wanted to do with his life. Now, he's earned his B.S./M.S. Accounting (Dual Degree) and will soon begin as a Junior Accountant at LeverPoint in Clifton Park, N.Y.

College didn’t take the first time for Travis Grossman. He tried some classes at a community college in California after he graduated high school, but he wasn’t focused enough to keep going. 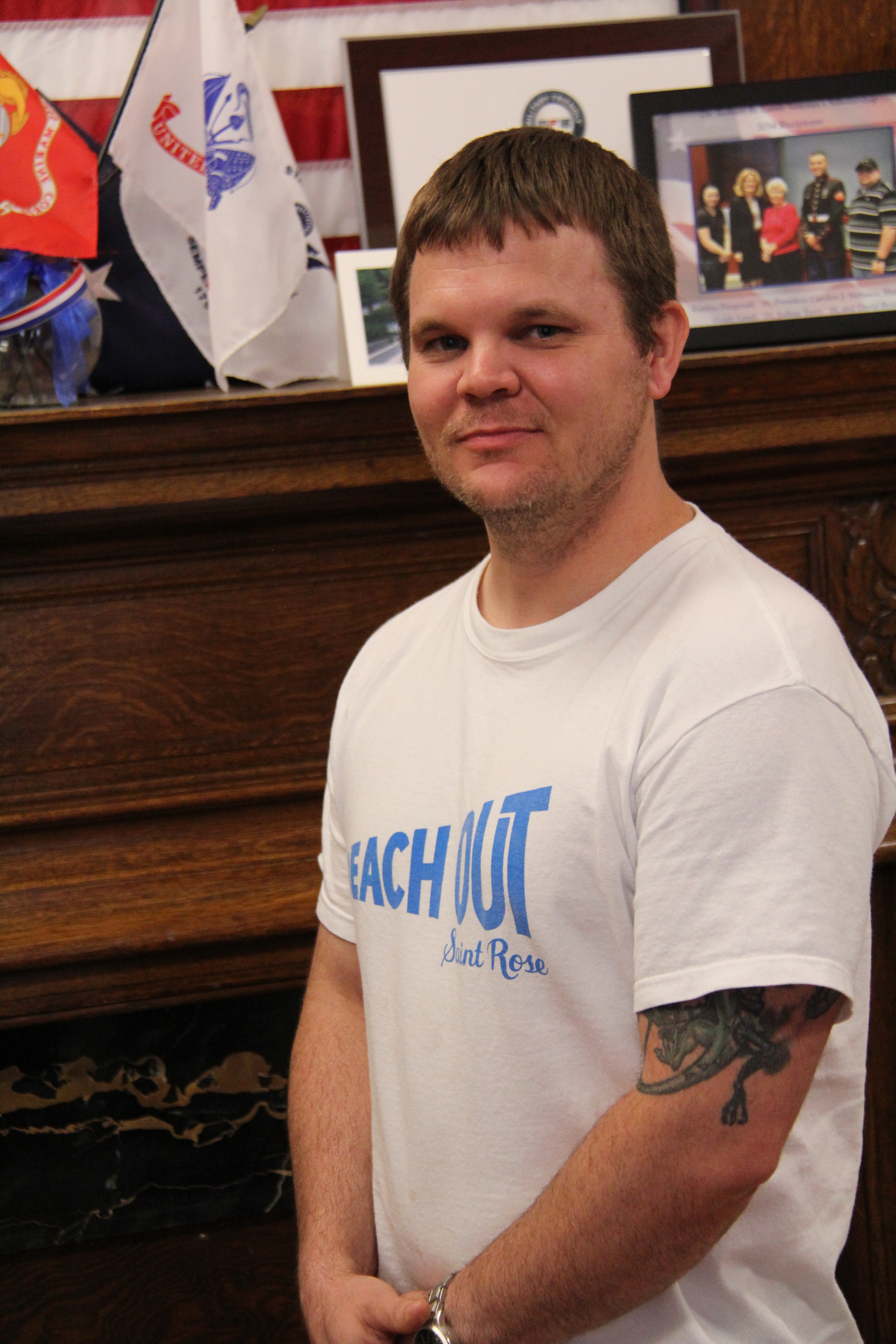 It was the Navy that would give him that focus. His friends had already joined, his uncles were retired from the Navy, and he wanted to see the world. So he enlisted in August 2000 and trained in nuclear energy mechanics at the Naval Support Base in Saratoga, which was his first look at the Capital Region. The Navy put him on a path of discovering what he was good at and where he wanted to go. He was stationed in the U.S. as a nuclear energy mechanic and never really saw the world while serving, but he did see himself in a new way.

The man who didn’t find focus in community college at 18, will now graduate at 37 with a dual degree in accounting from The College of Saint Rose and a position waiting for him at LeverPoint, an accounting firm in Clifton Park, in June. His wife, Amber, and his son, Christian, who was born in November, will watch him walk across the stage at commencement, as will his parents and siblings.

“Working in nuclear power, if you want to stay in that field, you get recruited right out of the military, and you get paid well. When you have your degree, it might not mean you get paid more, but you mean more to a company. You’re not as expendable. It opens up more job opportunities,” he says. “It means a lot to have my degree, not just looking at it from an academic point of view. It’s something I can show my son. When he gets old enough, I can tell him a degree matters.”

Travis spent just shy of 10 years in the Navy. He learned the study skills he uses today while he was out to sea studying nuclear energy mechanics. He couldn’t procrastinate if he wanted to stay on that track, where there was a lot of attrition.

“If you show drive, they notice. I can’t say I was the top student in it, but they noticed that I really tried hard and wanted to succeed,” he says. “I think I’ve applied that in life.”

He met his wife when he was stationed in Pearl Harbor. For a long time, she had been considering joining as an officer, and three years into their marriage, in 2012, she was commissioned in the U.S. Navy. At the time, he was finishing up an associate’s degree in general studies. But when he was done, he followed her to Japan, where she was stationed, and worked as a human resources administrator on the base. Travis had always liked working with his hands, but he learned during that time he liked paperwork and people, too. And numbers have always come easy.

“That was when I decided that I kind of like business. I had a good mentor – the director of HR was really a mentor to me,” he says. “But honestly I wanted to be at a higher position, and I couldn’t be with lack of experience in HR and lack of a degree. I didn’t want to go back to engineering.”

He and Amber knew he couldn’t enroll in college again if there were no guarantees where her next stop with the Navy would be, so she made the difficult decision to get out, and they began looking for a place to settle. He remembered the time he spent early on in the Navy training in Saratoga, and that’s where they decided to make their home. Travis was looking for small classes where he could get to know the professors and the other students. And so, he began regular commutes down the Northway to Saint Rose. 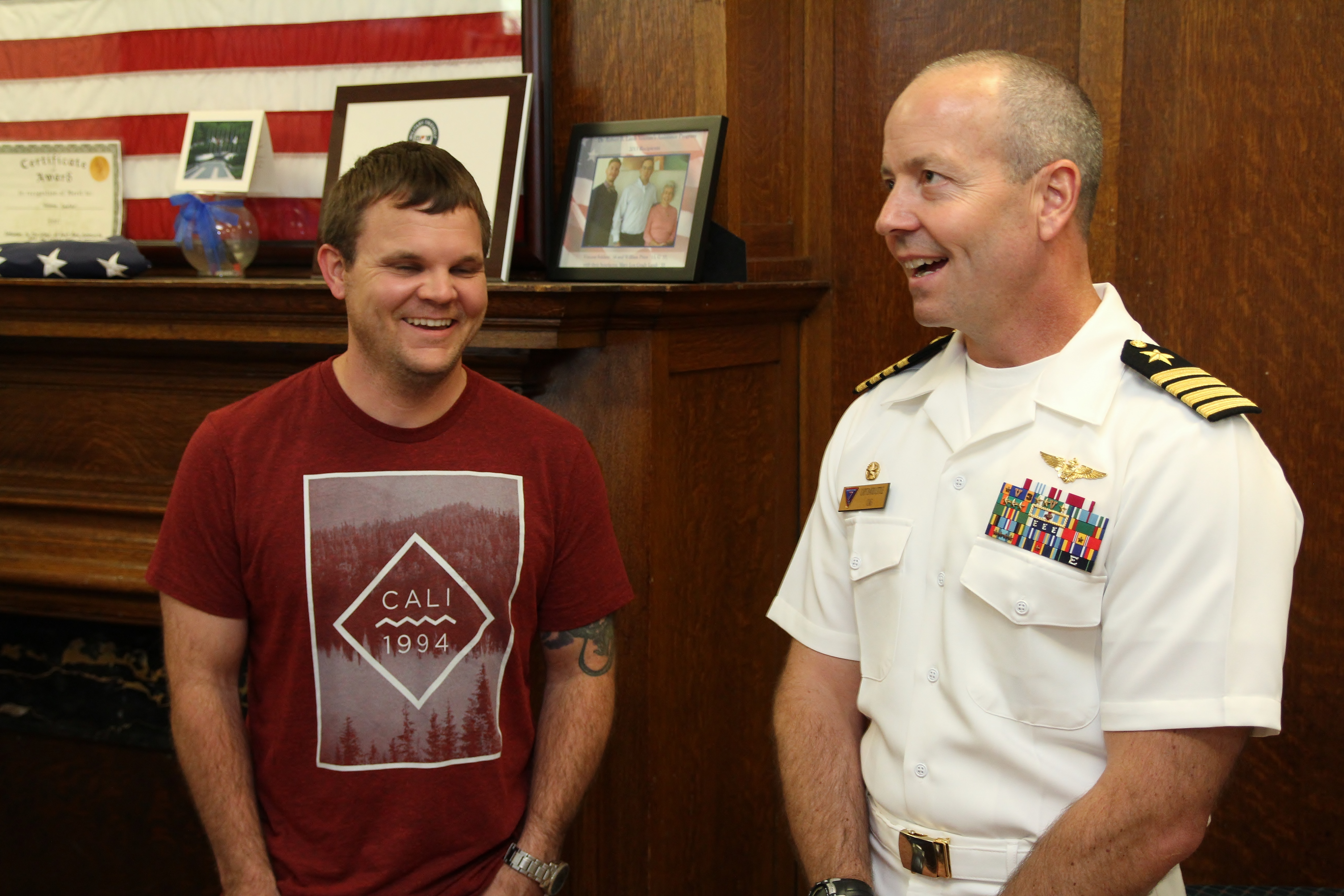 What he found was a community of veterans and the Veteran Center, where he’s spent most of his afternoons doing homework before his night classes, and he could always sit and talk to someone who understands what it’s like to be back in civilian life. As he neared graduation, he found help from Lynne Lapham, the Strategic Relationships Director for the Huether School of Business, who always made time to go over his resume again and again to help him stand out.

“I’ve spent hours with her going over my resume, changing it around,” Travis says. “She put in a good word when LeverPoint was recruiting in the EAC. She went over there and talked to them and said, ‘He’s a good guy.’”

It was easy for Lynne to do that. She had started meeting with him after he had won the Ruggiero Honors Internship Scholarship, awarded to those with a minimum GPA of 3.25. They combed over his resume figuring out how to convert his military experience into skills the public sector would understand.

“As a veteran student, Travis brings a distinctly different set of experiences with him,” Lynne says. “The transition from military life to the private sector is challenging. Travis did an excellent job of converting his military experience to the private sector.  As a more mature student with a new family, Travis also had a different level of responsibility and ‘seriousness’ about him.”

He’ll be a junior accountant at LeverPoint, but he told them at the interview that he wanted to get into management one day.

“I like managing people. I did it in the Navy,” Travis says. “It’s not the power part of it; it’s knowing your people and where their strengths and weaknesses are. It’s like a puzzle.”

Travis already put together the biggest puzzle, his own future. It didn’t come together right away, but when it did, it was exactly what he wanted.

Read more about the accounting dual degree at Saint Rose.