A specialist diagnosed Sean Obach with Autism Spectrum Disorder when he was 4. In fourth grade, a teacher discovered an untapped gift for the piano. Although he didn't believe he could attend college until he was a senior in high school, Sean earned his bachelor of arts in music and minored in chemistry and computer science.

There was something special about Sean Koehler Obach. His music teacher saw it in fourth grade and called his mother to say they should buy him a keyboard. They started with a basic 66-key version, and within six months they were told to upgrade to a weighted 88-key model.  Within the following year, they were moving their couch to the curb to make room for a baby grand. 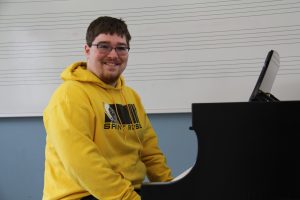 There was something special about Sean, played out as he sat at his parents’ cabin overlooking the Hudson River, a keyboard in front of the window, asking himself what water sounded like. It was the first piece he ever composed, “The River Song.”

There was something special about Sean that made him rise above the news his parents received from a specialist when he was 4 years old. Sean is on the autism spectrum and that meant he’d have to work hard to express himself and relate to others, and everything they dreamed of for their son was suddenly a question mark.

Until there was music.

“(When I play the piano) my feelings show, and I think others see it, too. They’re like ‘This guy seems really nice, and that is how he expresses himself,’” says Sean, who will graduate from The College of Saint Rose with a bachelor of arts in music and minors in chemistry and computer science. “And I just let my fingers do the talking.”

In 2013, when Sean auditioned with Saint Rose Professor Young Kim, he was a student different from anyone she’d worked with before.

“I still remember the first lesson. He came in, and he wouldn’t even look at me, and he would sit at the piano and look away from me. It was hard to communicate, and I had to figure out someway to communicate with him — with music. Now, after four years, we are having so much fun in lessons, and he’s definitely one of my top students in my studio.”

Young’s networking parties for students didn’t come easy for Sean. Even though Young was one of his favorite teachers, he tried to avoid going because he was uncomfortable mingling with strangers. He had always avoided new situations that would require him to interact with people and try new foods, something that is common for people in the autism spectrum. So a party was terrifying. It took a text from Young saying that he needed to get to a party that forced him to do something that was so unnatural. But he did it, and she made him feel comfortable for future invitations.

Performing in front of an audience is easy. Giving a talk after his senior recital was scary. The words took more effort than the notes did, but like everything at Saint Rose, he got through it. 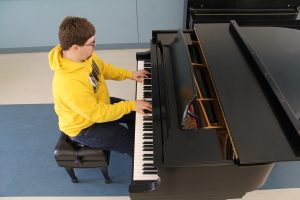 Music has always been comfortable and always made sense.  “When I’m playing music, it’s not more of a feeling, but what I see in my head,” Sean says. “What I see in my head is a bunch of colors mingled with one another, and I try to interpret those colors to the best of my abilities.”

Before Saint Rose, students called him “The Piano Kid.” He was a student of the John Sayles School of Fine Arts at Schenectady High School where he was in the top 10 of his graduating class. His closest friends were his music teachers, who he could always relate best to through their common language.

“(Autism spectrum disorder is) a gift in its own sort of way,” says his mother, Greta Obach. “I believe he’d never be the master musician that he is today if he didn’t have the focus that comes with this condition.”

Sean is 22, lives with his parents in Schenectady, and is a commuter to Saint Rose. Although he has his license, he’s not yet comfortable driving on his own, so his family provides transportation to the campus.

In his junior year, he was told by his programming teachers that he should have been a computer science major, and he is considering a master of science in computer information systems or starting a career in programming. None of that will take him away from music, though, that’s been with him now for many years.

Someday, he would love to be a member of an orchestra, a place where he could speak his favorite language. It’s a place where he is always comfortable and understood, where everyone’s colors flow together into one.

Read more about the music degree at Saint Rose.