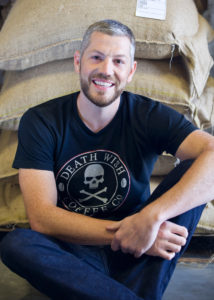 Caffeine overload. Super Bowl fame. Rabid fans. It's all in a day's work for the world's strongest coffee. Alumnus Mike Brown G'07 shares his experience and insights into developing his business, building his brand, and learning valuable lessons every step of the way.

“Sometimes friends and family will ask, ‘How does it feel to be so successful?’” said Mike Brown G’07, 37-year-old founder and CEO of super-caffeinated Death Wish Coffee (DWC). “And I’m like, ‘I just lost my car a few years ago. I’m not successful yet.’”

You would think that Brown’s story would pretty much fit anyone’s definition of “success.” This is a guy who quit his secure government job to buy a coffee shop, went broke, had the blockbuster idea of making “the world’s strongest coffee,” and skyrocketed to national marketplace dominance with a free Super Bowl commercial full of salty Vikings. But Brown is quite aware that his fortune can go south in an instant. 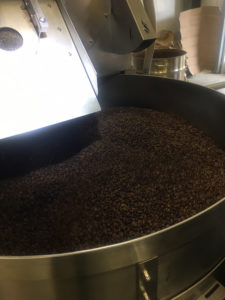 Take last September, when DWC discovered that the process for its Nitro Cold Brew could allow botulism toxin to grow in the cans. That could have been the brand’s death blow, but the team proactively publicized the danger, recalled the product, and issued refunds. “There were never any illnesses reported,” said Brown.

Smug journalists snorted at the irony of “Death Wish” delivering on its rhetorical promise, but the company’s transparency and determination to do the right thing made DWC come up smelling like a coffee-scented rose. “Because I think we handled things well with our customers, our numbers didn’t fluctuate at all; we came out ahead,” Brown said, remarking that DWC has since added a step to its process to prevent the problem. “We’re stronger now as a business. And, because of the press, a lot more people know who we are.”

I had asked myself whether I could deal with my worst-case scenario, and I could. It just made me work that much harder.

From bean counter to bean roaster

Clean cut, soft spoken, and wry, Brown seems a far cry from the bearded, tattooed, bellowing Viking persona that DWC fosters. Until his inner Viking surfaces. “I’m constantly trying to stay ahead of the game. If I’m not working, someone else is,” said Brown. “I’m competitive that way.”

He has learned a lot from his rags-to-riches-to-rags-to-riches experiences. It all began in 2008, when Brown decided he was not cut out to be an accountant in the Office of the New York State Comptroller, where he had been working while earning a master’s degree in accounting at Saint Rose. “I just realized it wasn’t for me,” explained Brown.

A Saratoga Springs coffee shop was up for sale, and Brown assumed it would be easy to run a business selling coffee. “I thought, ‘If I quit this safe, secure job, what’s the worst-case scenario?’ I had a house and car, and thought, ‘Well, I’d lose all that.’” 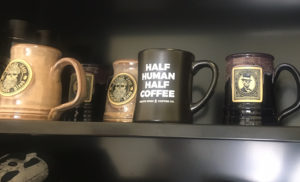 The worst case happened. Brown found himself living with his mother and borrowing from her to meet his payroll. “But I had asked myself whether I could deal with it, and I could. It just made me work that much harder.”

Since customers kept asking for the strongest coffee he had, Brown decided to make his own. At a Specialty Coffee Association event, he noticed an Indian vendor selling coffee made from robusta beans, which have double the caffeine content of arabica beans. “Their beans were just as good as any arabica, and they had a unique taste that was pleasant,” said Brown.

That encounter crystallized his idea for the “world’s strongest coffee.” The Death Wish name was inspired by a keychain his girlfriend had; Brown added a poison/Jolly Roger motif for good measure and founded DWC in 2012. But it was still an uphill slog. “I was watching my bank account run dry. I was watching my car being repossessed. I lost my house – I felt like a failure,” said Brown. 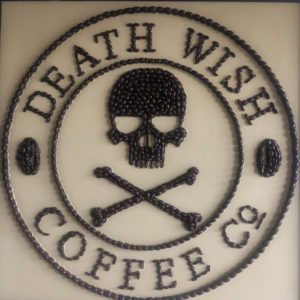 Then, in 2013, “Good Morning America” got wind of the freakishly strong coffee, and DWC became a national brand overnight. “The next day, we sold out of coffee,” said Brown. He recalled watching his PayPal balance mount steadily, wiping out his $65,000 debt. “About a week after, I was back in the black and had a plan going forward about how it was all going to work out. That’s when I felt like an entrepreneur.”

Things took a turn for the worse: DWC couldn’t keep up with demand. Amazon kicked Brown off its platform, and eBay banned him for life. Disgruntled customers who expected their coffee in three to five days had to wait nearly a month. “That was a lesson learned: Even though your transaction is made, you have to exceed your customers’ expectations,” said Brown.

He decided to refund customers, deliver the product, and come clean about what had happened. “It’s crazy how far honesty will go, and how far the story will go,” said Brown. “If you get on a common ground with people, they’ll root for you. Because they want you to succeed.”

People have hard enough lives; when they come home and check their email and social media, we hope they get something from us that brightens their day.

Powering customers and making them smile

DWC’s customer-first policy has steadily earned Brown and his growing team a devoted following. It was fans who tipped “Good Morning America” off to the brand, and it was their diehard support that propelled DWC to Super Bowl fame in Intuit’s online contest (out of 15,000 entries, Intuit’s judges chose 10 small businesses as finalists; online voters chose the winner). 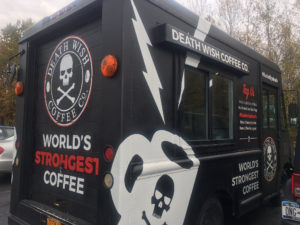 By most accounts, DWC is a tasty brew that will propel you through your task, whether that involves hoisting a mainsail, tossing cabers, or doing income taxes. But the power of the brand arguably lies in its sense of community. From 20-percent discounts for monthly subscribers, to #Grinditout video portraits of and podcasts with loyal DWC drinkers, to sponsorships of the Special Olympics and NASCAR, everything DWC does – outside of producing coffee – is geared to cultivating relationships with customers. That base includes lots of office workers, overworked parents, and senior citizens who are not necessarily Vikings.

“We have the best customers: They cheer for us, and they’re fantastic,” said Brown. “We’re trying to facilitate this community and give them things to be happy about. People have hard enough lives; when they come home and check their email and social media, we hope they get something from us that brightens their day.”

DWC strives to become part of its customers’ community. “We don’t want to be poseurs or just show up and try to sell you stuff,” said Brown. “If we’re going to come to your group, we’re going to add as much value as possible, in the most genuine way we can. We made two comic books for Comic Con. We sponsor a NASCAR. We hang out with Special Olympics athletes, bowl on their team, and support their events.” 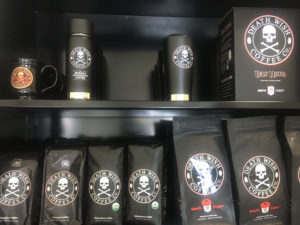 DWC plans to stay in its current rented facility in Round Lake through 2019; Brown hopes to eventually buy his own facility. The Waterford native fully expects to keep the company in the Capital Region. “People have been great to me here, friends and family are here, and my employees are super talented – I wouldn’t want to lose them,” he said.

I remember sitting in my Saint Rose night classes and thinking, "Everyone here is so freaking smart – the curve is going to kill me."

Doing just fine on the curve

Brown is a finalist for Ernst & Young’s 2017 Entrepreneur of the Year, a prestigious global competition that counts Dell Computer’s Michael Dell and Amazon.com’s Jeff Bezos among its winners. He is also learning to manage a quickly growing operation, with a team that now numbers 27 members. In addition to its original Amazon platform, DWC sells in nearly 500 stores in the Northeast and northern California, plus some retailers in Hawaii, Arizona, Nevada, and Texas, and most recently on Amazon China. DWC also appears in cobranded products like beer, vodka, soap, and Chemex pour-over brewers. 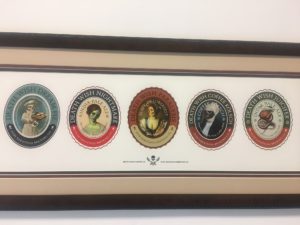 Perhaps because of his accounting background, Brown still insists on seeing all DWC invoices and paying all the bills. Serving as the face of the company while keeping its operations running, Brown could easily work round the clock. “My girlfriend makes me go home. I have a top-seven list of things I’m working on, and she always erases the last one and writes ‘RELAX,’” he said.

All in all, Mike Brown just seems to be a nice guy who really, really wants you to love your cup of coffee. Self-effacing and humble, he sounds bemused at his own accomplishments – all of them. “I remember sitting in my Saint Rose night classes and thinking, ‘Everyone here is so freaking smart – the curve is going to kill me,’” he said. “But the professors were great, they made me feel at home and like I belonged.

Read more about the master of science in accounting degree at Saint Rose.