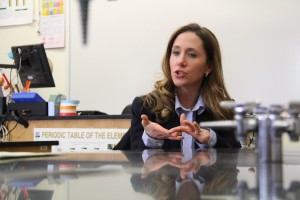 Kate Daddario DiCaprio ’02 was always fascinated with germs and she learned a LOT of science at Saint Rose, where she was a stellar biochemistry student who worked closely with professors. But what led her from the close-knit Albany campus to one of the most highly restricted military labs – and a possible treatment for Ebola – was the confidence she developed at Saint Rose. Just two years after graduating, she was a graduate student in pathology when she spoke up after a stirring talk given by eminent Ebola researcher Thomas Geisbert. He invited her to work in his highly restricted lab and, after exhaustive trial and error, DiCaprio was there when all primates given a treatment for Ebola survived. The breakthrough garnered publications with her name on them and drew international attention. Today, a decade later, the National Institute of Health has fast-tracked the discovery in hopes of preventing another epidemic. DiCaprio went on to head emergency preparedness and response for the New York City health department during the H1N1 scare. Now she has left the lab for the classroom as a professor of pathology teaching health care professionals.

Through her career, the lesson, she says, is to aim high, with confidence. “Now I tell my students ‘if you want to do something, you really need to put yourself out there.’ It started at Saint Rose. They pushed me forward.”

Learn more about a degree in biochemistry from Saint Rose.