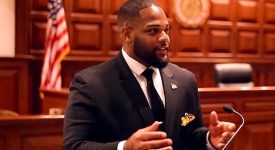 Jermaine Brookshire, Jr. ’13 felt that he was part of a family the moment he came to The College of Saint Rose from New Haven, Connecticut. From the personalized support he received from professors and administrators to the leadership skills he developed through his involvement in more than 50 campus events, Jermaine flourished here. He used an internship with the New York State Senate as a springboard to start a career with the state Legislature. As a principal legislative analyst with the State Assembly’s Labor Committee, he helped shape laws that affect millions of workers. This fall he earned a place at one of this nation’s top-20 law schools, Washington University School of Law in St. Louis, studying corporate and securities law. He hopes to one day become a justice on the United States Supreme Court. Jermaine, along with several other Saint Rose alumni, also started his own non-profit organization, The Great Expectations Movement Inc., to help young people unleash their potential. Even beyond the academics, community and career building experiences, Jermaine credits Saint Rose with helping him raise his own expectations of himself.

Read more about the political science degree at Saint Rose