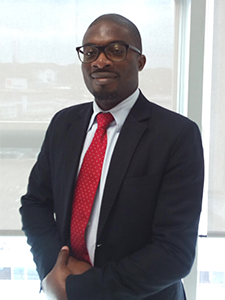 Ebah Patrick Ngole returned home to Cote d'Ivoire after studying Information Technology at Saint Rose stocked with more than knowledge that allows him to help clients get up and running with electronic cash-management systems. Inspired by his time in the United States, he wants to ultimately become an entrepreneur after seeing Americans who forged ahead with their own businesses.

On any given day, Ebah Patrick Ngole G’07 might be working with the United Nations, with a huge international corporation such as UNILEVER, or with a local small-business owner. As electronic banking channels officer for the Transaction Services Group at Ecobank Côte d’Ivoire, he manages teams that help clients of all sizes set up, learn, and run the electronic cash-management systems that keep their operations moving.

Ngole is in his home country of Côte d’Ivoire, to which he moved back in 2008, shortly after earning his masters in Information Technology (formerly known as Computer Information Systems) from Saint Rose. He works in Abidjan, the country’s economic hub and home to nearly 5 million people. “It’s a lot bigger than Albany, and there’s lots of traffic, but I love to be home with my family,” he says.

Abidjan is a key location for Ecobank Transnational, the largest independent pan-African bank in West Africa and Central Africa, and Ngole plays a key role in helping clients in the complicated world of international banking.

Before joining Ecobank four years ago, Ngole worked for about five years in application delivery and support at the United Bank for Africa – the job he landed in 2008. That was a little more technical and a lot less client-facing. “My previous job was a back-office function, writing codes and scripts and managing applications,” he explains. “Now, I feel the heat of dealing with customers! It’s a great human experience.”

Ngole loves the work he’s doing now, providing financial IT solutions to clients, and helping them sort through the myriad and complex issues of transnational currency exchange and regulations. He hopes eventually to hang out his own shingle. “I aspire to be an expert in the digital payment and global cash-management field, and set up a consulting firm in West Africa,” he says.

Currently, huge multinational consultants like KPMG and Deloitte Consulting dominate the field, and boutique consultancies like the startup Ngole envisions don’t always get a fair shake in terms of compensation. However, opportunities abound in the region, and Ngole is confident that the strong economy will create a better playing field for everyone. “Business is booming, and more managers understand the role of consulting,” says Ngole.

He first caught the entrepreneurship bug during his time in Albany. “Before I came to the United States, I was only thinking about having a safe job,” he says. “During my time in the United States, I was amazed about how many people want to make a change in the world. No matter the size of the business, they are so passionate about running their own, and having an impact in the community.” 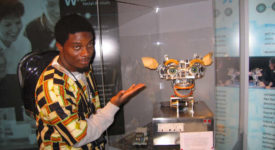 Oddly enough, if it hadn’t been for his poor eyesight, Ngole might never have come to Saint Rose. After he finished his undergraduate degree in IT for business enterprises in 2004 at the Université de Cocody, Ngole wanted to remain in Côte d’Ivoire. He had no interest in his parents’ suggestions to move the United States for graduate school.

Instead, he wanted to serve his own country, joining the national army as an IT specialist. “I passed the test to join the army, but failed the medical exam because of issues with my eyes,” says Ngole.

When he asked his father, a high-ranking military official, to intervene with the armed forces on his behalf, he didn’t get the response he expected. “My father was angry because he didn’t want me to join the army,” Ngole says. “He wasn’t even aware that I took the test.”

The two agreed to fall back on Plan B: studying in the United States and staying with an uncle living in Albany. Ngole chose Saint Rose because of its Catholic roots (a devout Catholic, he begins every work day with a prayer) and for its small class sizes and excellent reputation. He started his graduate work in 2006.

At Saint Rose, beyond gaining technical proficiency, he received excellent training for dealing with his multicultural clientele and coworkers. “Because my class was a mix of various cultures, I developed cultural intelligence – we even had a course on this topic!” says Ngole. “That helps me interact with colleagues in other countries.”

A Home in Albany

While at Saint Rose, Ngole found a warm welcome with Ann Wilkening, director of international studies, who retired in 2012 after 22 years with the College. She hosted gatherings where Ngole would meet other international students, and otherwise provided seemingly unlimited support. “She was very kind to me and helped me anytime I had a question, with tips for deals on books and groceries, or just to have a chat.”

It was Wilkening who recommended Ngole to Professor John Avitabile for an attractive internship developing web applications for the New York State Department of Education. “I’m still in contact with Ann, who was my ‘mom’ at Saint Rose,” Ngole says. “The best memories I have of Saint Rose are of times with Ann, and the graduation ceremony.”

Commencement was an emotional time for Ngole, for a number of reasons. For one, the Saint Rose commencement was perhaps more exciting to him than to many of his classmates because it was his first graduation ceremony, he says; they didn’t have such ceremonies in Côte d’Ivoire. Second, he was proud of his accomplishment: “Completing the degree with a 3.75 GPA was a big accomplishment for me, and it meant a lot for me,” he says.

The event was bittersweet, however, because Ngole’s parents couldn’t be there to watch him walk across the stage. “Not having my parents to celebrate with me was also emotional,” he adds. “I was happy and sad at the same time.”

Ebah invites correspondence from any alumni who are in the same field, or who have interest in doing a project in West Africa.