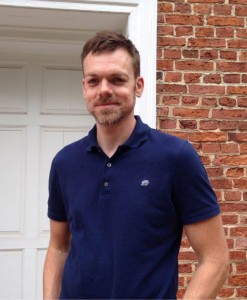 A mailman drops a cigar, starting a fire that kills a woman and sets in motion the events of Dennis Mahoney’s first novel. Told through multiple perspectives, “Fellow Mortals” triggered its own swift reaction, moving Mahoney ‘96 from unpublished author to an author being compared to top American novelists. The New York Times praised “Mortals’” depictions of people seeking meaning in disarray. Booklist named it a Top 10 Debut Novel and said Mahoney deserves a place alongside Dave Eggers. Barnes & Noble named it a Discover Pick. His second book “Bell Weather” (Henry Holt and Co.) was a July ’15 Indie Next Pick.

Mahoney, who lives and works in his hometown, Troy, says he cannot imagine his career path without Saint Rose, where he majored in English and immersed himself with fellow writers and students across the disciplines. “Meeting students and professors who shared my writing obsession validated the pursuit. I felt like a Martian landing on Mars and realizing, after years of confusion, that there were others like myself with the same strange antennae.”

Learn more about a degree in English from Saint Rose.