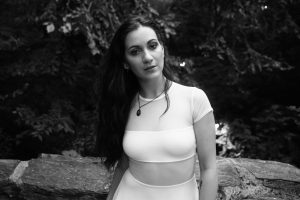 Allie Crystal had just come home for the holidays in 2014 when she and her family caught her spirited song Coming Home to You on a Kohl’s commercial. “I was speechless and then, a minute later I started bawling,” she recalled. “All that hard work had finally paid off.”

It paid off again the following year, when Starbucks used Coming Home to You in its holiday commercial. Friends caught it on the radio, on YouTube and during “Saturday Night Live.” “Starbucks showed its customers having a big party in one of its stores,” Crystal noted. “Kohl’s showcased holiday merchandise with smiling models.”

The double dose of good fortune adds up to a promising career for the young artist, who learned the business side of music as a Saint Rose music industry major. Crystal, in fact, transferred to the College to work in the top-notch recording and performing spaces at the Hearst Center for Communications and Interactive Media.

“A good number of songwriters didn’t attend a music school, so they learned things on the fly or got a manager. But I graduated with a solid understanding of publishing, recording and the industry’s status,” Crystal said. “I’m able to engineer and produce my own songs and it really sets me apart.”

The singer-songwriter with the made-for-show-business name is thriving. Her Every Little Beat was used in MTV’s “Teen Mom 2” and on Bravo’s “Vanderpump Rules.” Crystal’s electronic dance music credits include Nicky Romero’s Heartbeat and collaborations with Gazzo, Illenium and King Deco. She also writes and records with her own group, Sugarwhiskey.

Crystal’s focus, though, is on writing. Her songs come largely from everyday life. Composed on a ukulele, the folk-inspired Coming Home to You — which she wrote in the heat of July – touches on universal themes of love and family. And the writer is just as gratified that friends like it as much as a coffee chain and a department store do.

“When people tell me they play it at home and that their kids love it, it makes my heart melt!” Crystal said.

Click here to listen to I’m Coming Home to You