A scholarship gift initiative started by the Class of 1970 in honor of their 35th Reunion, the goal of Project 70 is to take advantage of alumni business connections in New York City, Boston, and other cities in the U.S. and around the globe.

This year, Project 70 helped send two exemplary students to summer internships that expanded their horizons. The selected interns were awarded a $2,500 stipend to cover the cost of travel and expenses. To date, the Class of 1970 has collectively raised almost $119,000 toward the Project 70 endowed scholarship since its establishment.

These experiences would not be available to these highly deserving students without the generosity of the Saint Rose Class of 1970 and donors like you. 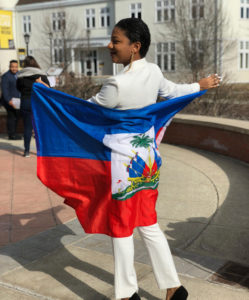 Myrdel Geffrard, orginally from Port-au-Prince, Haiti, holding out the flag of her home country.

I knew that an internship was required to graduate from the dual degree Business Administration program, but being an international student from Haiti made it challenging. I didn’t have a network of contacts here and I worried about how I could afford to live on my own for the summer. My advisors, knowing that my interest leaned more toward investment than financial management, suggested Ayco. I was a nervous about my chances when I saw that it was a Goldman Sachs company, but of the three internships I was eventually offered, they were the company who were able to help me with a work permit.
I was thrilled to find out that I had been awarded support for my internship through Project 70. It helped to cover the extra living expenses during the summer, which allowed me to focus on my internship instead of worrying about my finances.
My internship was an incredible, life-changing experience. At first, it was difficult. Being from a foreign country and speaking with an accent, I worried that I didn’t fit it. I had to learn a lot of new acronyms and Ayco’s specific procedures and investment vehicles fast. There was no baby-sitting so I got proactive and sought out learning and training on my own. Fortunately, there were a number of Saint Rose alumni working there who helped me out. I showed a lot of interest and determination and I never refused a task.
When the summer was over, and a number of the other interns left, I was able to continue on and take on even more responsibilities. Soon, managers were coming to me for everything saying, “Myrdel, if we give it to you, we know it will get done.” That made me proud. I grew up a lot on this job. I learned to take responsibility for my mistakes and not to take things too personally.
One day, my manager asked what my end goal was and I said, “I want to work for you”. I received my education at Saint Rose and I need work experience so that eventually, I can return to Haiti and make a difference in my country. I met with all the different sections of the company as I applied for a full time job and the experience helped me to develop my elevator speech and personal branding. When Human Resources called to offer me a permanent job, I was overjoyed. Sponsoring a work visa is expensive and knowing that they chose me despite that made me feel as if all the hard work I’d done and the fears and frustrations I’d faced had been worth it. I said “Girl, you did that. You really did that!”
Growing up in Haiti, I saw so much suffering. There are political issues, corruption, and natural disasters where people lost everything in an instant. But I also love my country. It has given me so much and taught me to be a fighter. I want to use what I’ve learned at Saint Rose and my experience at Ayco to help fix the problems. I believe that by working in partnership with other countries, reforming government and the financial sector, and making good investments, Haiti can become a more secure, successful, and financially independent country.
Personally, I want people to see me and know that you can dream big and succeed if you are determined and you work hard. I am a black girl who studied finance and now I work for a Goldman Sachs Company! I defy all the odds. I want to be an example for all girls like me. I don’t want anybody to tell someone else that they can’t do something because of where they’re from, their gender, or their financial situation. Only you can define your life. The road will not be easy, but it’s not impossible. Defy the odds!
My grandmother did not even know how to sign her name. I am the first in my family to obtain a master’s degree. My experience at Saint Rose, my internship at AYCO, and support from Project 70 has changed everything for me. Education is the only investment with such a great rate of return and no risk. Thank you for giving me the most priceless gift of my life – my education!

The most memorable educational experience I’ve had so far at Saint Rose was my summer internship at Stun Creative, a design agency in Los Angeles California. At first I felt a bit out of place, being in Los Angeles for the first time and not knowing anyone, but I quickly made friends with other interns and staff and I was given interesting projects to work on that helped to further my technical and marketing skills and deepen my interest in the field of graphic design.
It was an amazing experience to be able to work with such incredible people who are so high up in their profession. I worked with a senior animator who had worked on the Ice Age movie. Michael Vamosy, the Saint Rose alumni who mentored me during my time at Stun was so approachable and willing to share his expertise. He even asked me to be his partner in the company corn hole tournament! I made friends with Austin, the other summer intern, and we worked together on several projects and met up outside of work to explore LA. 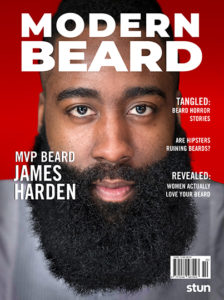 In addition to working on marketing decks, Michael assigned us a comprehensive internship project because he wanted to make sure that by the end of the summer, we had something more than school assignments to add to our portfolios. I chose to reimagine a promo Stun did for the TV show “Siren” I redesigned and remixed the footage, adding my own graphics and making my own key art. It was great having all of Stun’s assets to work with and helped me expand my 3D/motion design skills. I was particularly proud of a “Modern Beard” magazine cover that I designed with basketball legend James Harden’s image. It was used in a Mission Impossible: Fallout promo for ESPN.
After graduation, I hope to be able to move back to L.A. and pursue a career in graphic design. I’d love to work again for Stun and they seemed interested to have me back and have offered to help with networking.
Having the support of Project 70 made a big difference for me. I had no idea it was coming and it was very much appreciated. LA is an expensive town and I used my scholarship to pay for my Air B&B for the summer. Having that extra support allowed me to experience and explore LA more in my free time, and helped me to keep my focus on working and learning at Stun without worrying about expenses. 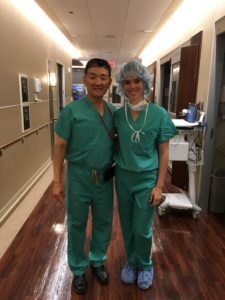 The University of Nebraska Medical Center Summer Undergraduate Research Program
Liana Morales is a biology major here at The College of Saint Rose. During her time at The University of Nebraska Medical Center (UNMC), Liana was paired with Dr. Donny Suh, M.D. Dr. Suh acted as a mentor for Liana for the duration of the Summer Undergraduate Research Program (SURP). During Liana’s research project, she got to work with a new retinal screening device called The D-Eye. The D-Eye is a device that can be attached to a smartphone and allows the user to detect issues within the patient’s eye.
Liana and her work with Dr. Suh on this new technology were featured in an article published by UNMC. This ten-week program culminated in Liana presenting her research on the “Effectiveness of D-Eye: Smartphone-Based Retinal Screening System in Diagnosing Idiopathic Intracranial Hypertension in a Pediatric Patient”. During her tenure at UNMC, Liana also assisted with basic clinic operations, getting a feel for what life is like in her chosen field. 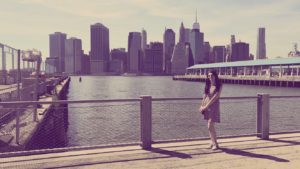 Downtown Music Publishing Internship
Emily Mitchell is a music industry major here at The College of Saint Rose. Emily was offered, and thrilled to accept, a highly competitive internship position with Downtown Music Publishing. Emily worked on a variety of projects, including studio work for special performances and at the Soho office. She spent a majority of her time working for the creative sync department. In this capacity, Emily assisted with the creation of newsletters, uploading of music to the company website, and choosing music for potential advertisements.
Emily stayed on the NYU campus, thanks to the funding she received from Project 70. Because she was so centrally located, Emily was able to explore New York City with the friends she made at her internship. She was able to attend concerts of some of her favorite artists (Dawes and Conor Oberst) which allowed her to fully experience the New York City music industry. Emily was also able to attend a Yankees game with her family when they visited her.

I am forever thankful for Project 70 and those who granted me this opportunity.

While at Saint Rose, I landed an internship at Stun Creative, a design agency in Los Angeles California. Having the support of Project 70 made a big difference for me. LA is an expensive town and I used my scholarship to help me keep my focus on working and learning at Stun without worrying about expenses.

While at Saint Rose, I landed an internship at Stun Creative, a design agency in Los Angeles California. Having the support of Project 70 made a big difference for me. LA is an expensive town and I used my scholarship to help me keep my focus on working and learning at Stun without worrying about expenses. Graphic Design

My grandmother did not even know how to sign her name. I am the first in my family to obtain a master’s degree. My experience at Saint Rose, my internship at AYCO, and support from Project 70 has changed everything for me. Education is the only investment with such a great rate of return and no risk. Thank you for giving me the most priceless gift of my life - my education!