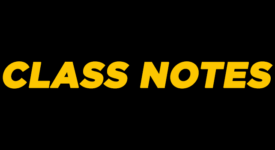 Emily Barcia-Varno ’18 was crowned 2019 Albany Tulip Queen at Tulip Fest in May.

Ann-Marie Berdar ’18 is the cofounder of Bare, a smoothie shop in Stuyvesant Plaza, Albany New York. “We opened our first location about 6 months ago, and are doing very well! My shop is a 100% vegan and gluten-free facility that only serves food made with all natural plant-based ingredients. Our mission is to promote health and wellness in our community.”

Emily Mitchell ’18 started working as a client success associate at Songtrust in Brooklyn, New York. She has been with the firm since March 2018. “Moving to the city has been a very exciting experience,” she adds.

Brian Tomek ’17 is a chemist working at FB Laboratories in Hauppage, Long Island.

Nick Menozzi ’17 is a business development manager at Impact in London, England. “I recently left my position as a stock broker on Wall Street to work for a technology marketing firm in my hometown.”

Christopher Benfield ’16 is pursuing his doctorate degree in vocal performance at the University of Washington in Seattle, Washington. “I have just performed in the West Coast premiere of Philip Glass’ ‘Hydrogen Jukebox,’ and I am preparing for the Met National Council Auditions in October of this year. I am also going to be participating in the Lawrence Opera Theatre summer program in Lawrence, Kansas, in August.”

Erin Davenport ’16 is a 911 emergency dispatcher with the U.S. Navy, Department of Defense, in Silverdale, Washington. She is pursuing a master’s degree in forensic science and technology at Stevenson University.

Ashlie Garcia ’16 is a store administrator at Nordstrom in the New York City metropolitan area.

Brittany Terry ’15 is working as an HR coordinator for Northrop Grumman in the Chicago, Illinois, metropolitan area. “This is a complete position change – back to my HR roots!”

Cherokee Lynn Grimes ’14is working as the community engagement coordinator for WMHT in Troy, New York. “I was teaching in Catskill, but transitioned to WMHT to work in education in a different capacity and be closer to home.”

Dominick Benedetto ’14 is a senior executive with Numerix LLC in New York City.

Ryan Brauer ’11 is a case administrator at Chronovo, which is headquartered in Burlington, Massachusetts.

Lindsay A. Roth ’06 is assistant vice chancellor of annual giving at the University of Massachusetts at Dartmouth. “I was married in December 2018 to Steven Sechoka in Poughkeepsie, NY. We are currently living on the south shore of Massachusetts.”

Matt Luneau G’97 has become the men’s basketball coach at Clinton Community College in Plattsburgh, New York. He coached women’s basketball at Saint Rose in the late 1990s and has also coached at Siena College in Albany and at Syracuse University in Syracuse, New York.

Loretta (Lori) Palmer ’99: “I am proud to announce that I will be graduating from SUNY Empire State College next month with a Masters of Arts in Adult Learning.”

Rosalind Gaines-Harrell ’93, G’01 was named Administrator of the Year by the City School District of Albany. She is principal of Arbor Hill Elementary School in Albany, New York.

Nicole Radens Arel ’96 was recently elected to a two-year term as a delegate for the American Massage Therapy Association. She also serves as the Connecticut Chapter’s Government Relations Chair and was awarded the “Firecracker Award” for her drive, enthusiasm, and efforts at the state level regarding legislation affecting the massage therapy field.

Rose Horton ’90 has been promoted to vice president and branch manager for Old Point National Bank in Newport News, Virgina.

Carol Connolly ’61 is in Chapel Hill, North Carolina, where she moved with her husband after retiring from teaching in the Wynantskill School District. “I was also a professional storyteller for 25 years, performing solo and as part of a four-woman ensemble. We brought our tales to adult and family audiences.” She performed with her husband from 1991 to 2015 in the storytelling duo, Tales ‘n Tunes, which toured New York, New Jersey, Massachusetts, and Vermont.