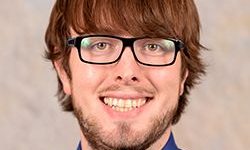 How much should the people who produce and sell things know or care about the people who buy and use them? That’s the question posed in a cautionary 1951 short story “The Man Who Sold Rope to the Gnoles” – and the topic of a soon-to-be published case study by Saint Rose Assistant Professor of Management Warren Cook.

Cook’s solo-authored “Selling Rope to Gnoles – Exploring Business Ethics Through Horror Fiction” will be published in January by SAGE Business Cases, which produces materials that facilitate discussions in business classes. Cook’s case study uses Margaret St. Clair’s horror story about Mortensen the salesman, who knows little about gnoles when he goes to their home to sell them rope. When he turns down an over-generous payment offer negotiations sour and the gnoles kill him.

“Ultimately, his fate has more to do with cross-cultural misunderstanding than anything else,” notes Cook, “which we talk about in class; the importance of understanding cultural contexts when trying to traverse these boundaries in business.”

Cook, who researches corporate responsibility and business ethics, was interested in promoting a lesson mixing business teaching and the arts. He discusses here:

Why base your lesson around the St. Clair story?

The disconnect between businesses and how their products are used reflects a longstanding attitude especially prevalent in the era when this story was written.

That said; it’s never clear exactly how aware Mortensen is of the gnoles’ true nature, until the end. He knows they have a “bad reputation,” but it’s not clear whether that’s based on rumors or stereotyping, or even what that “bad reputation” truly means, so that’s a rich area for discussion.

It’s also interesting because Mortensen is actively concerned with ethics; he rejects an emerald in an effort to maintain a high ethical standard, taking a firm stance against claiming excessive profits. This, too, opens up an interesting line of discussion: what does it mean to make “legitimate profit”? Was Mortensen right in the spirit of what he was attempting to do?   Instead of the “golden rule;” treat others as you would like to be treated, this story stresses the “platinum rule;” treat others as they would like to be treated.

How have companies generally thought about their customers?

Historically, businesses have a limited scope of responsibility. Nike claimed in the 90s, for instance, when under fire for poor working conditions in factories that make their shoes, that Nike doesn’t manufacture anything themselves so they can’t be held accountable.

It’s the idea that businesses have strict boundaries and what happens outside their boundaries doesn’t matter. This is reflected in Milton Friedman’s quote in the New Yorker in 1970 that the corporate social responsibility is to make a profit as long as it’s operating honestly and playing by the rules of the game.

Is concern for the end user still lacking?

There are examples of it lacking: JUUL, Facebook, gun manufacturers, opioid companies.

But now there’s an expectation for businesses to care about how their products are used and how we should hold business partners accountable. There’s Dick’s Sporting Goods’ exit from gun sales; Japanese cell phone manufacturers’ willingness to install mandatory shutter sounds to discourage inappropriate stealth photography; GE’s efforts to crack down on misuse of their ultrasound machines for illegal sex-selective abortion in India.  The last 30 years, in particular, have rendered a lot of new work in this direction.

Even as educators, we have to tread carefully when it comes to how the knowledge we’re sharing is used. It highlights the importance of ensuring that ethics has a constant presence throughout the curriculum.

How can the business world balance humanitarian ethics and profits?

Big question! There are many specific ways that businesses can act on values and serve humanitarian interests, whether we’re talking about engaging in philanthropy, changing the way they operate, or transforming their entire business model.

I teach an MBA course on corporate social responsibility where we go into these issues in more detail. As it happens, even publicly traded corporations have a lot of flexibility to engage in social responsibility initiatives; it’s not all about maximizing stock price, even though that’s important.

In many cases, doing the right thing doesn’t conflict with making lots of money. For example, companies that prioritize cutting down on waste or switching to renewable energy often see savings over time, but there’s a significant upfront investment.

Usually, corporate social responsibility initiatives have the best chance of success when they make sense in context of the strategic goals of the business.

What highly successful companies are working toward the collective good?

Patagonia’s founder recently made the radical move to donate the company “to the planet,” which means that the company’s profits will go to environmental nonprofits. Ben & Jerry’s has a long history of social activism. Salesforce.com has some really interesting philanthropic initiatives. Dave’s Killer Bread hires and supports people who have been formerly incarcerated.

How does this translate to the classroom?

It’s definitely important to talk about the role models in business, and not only focus on cases where people have done something bad. I try to strike a balance in my own classes. I want students to understand that there are businesses out there that have proven it’s possible to make lots of money while having a positive impact on the world.

Finally, what would you have told poor Mortensen before he approached gnoles?

I suppose the easiest advice would be to not do it! Maybe letting him know just how dangerous the gnoles are would help.

It’s not clear Mortensen fully understands what he’s getting into. It’s easy to give advice knowing what happens to him. It’s harder to give advice that would prepare him for unknown situations where any number of things can go wrong.

That’s why it’s important to take the time to understand cross-cultural differences, understand the audience you’re approaching, and proceed with caution.