Ryane Straus has made the study of race relations and race in American politics her life’s work. She grew up in a diverse California community with schools mirroring our nation’s racial divisions, later earning her Ph.D. in political science. She devoted her dissertation to the impact of magnet schools on desegregation in Los Angeles. 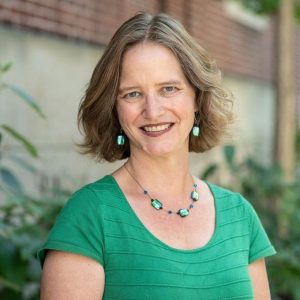 Albany has presented a surprising new avenue of scholarship. Straus is working on a book for NYU Press on Albany’s explosion of charter schools. Here, she discusses charter schools, an increasingly diverse Saint Rose, and student activism.

On why “color blind” is not useful:
A lot of people have said, “I don’t see color” or “color doesn’t matter.” But when you do that, you can’t see how important it is. You can’t see how people are treated differently. I tend to be the opposite. I tend to say we should talk about race and racial constructs and what it all means. In scholarship, we largely agree that race is a social construct, not biological. But it also has incredible social and political importance.

On changing demographics at Saint Rose:
When I got here, Saint Rose was overwhelmingly white. Around 2008, I began to have many more people of color. Classes became much more collaborative because students had much more to share. At that point, my classes got better because we had more viewpoints. I find our students are really open to sharing things.

On activism:
What I have found with the high school shooting in Florida, is a whole social movement of young people who couldn’t even vote led by Emma González. It is something that I both see in the classroom and try to encourage in the classroom. Personified by González and [teen climate change activist] Greta Thunberg, they’re protesting, and they’re not afraid to speak their minds. And coupled with the 2008 election, when young people really voted, I see a population that’s going to make the change that boomers and Gen Xers and millennials haven’t. This is why I started voter registration drives in 2016. It was motivated by seeing these activist young people. When we started, we went in the Saint Rose shuttle and registered people in Albany. During an off-year election, I said “Let’s just be on campus,” and we registered even more people. Looking at this younger generation, I’m really optimistic.

On her charter school research:
I quickly noticed the charter schools in Albany were almost all Black, with some Latinx students. Coming out of a very pro-civil rights background where civil rights is good and we need to be together, for a largely Black population to choose Black schools struck me, at first, as violating what Dr. Martin Luther King Jr. had worked for. We’re looking at Black individuals choosing a Black school. The second thing was that the middle-class white parents were really angry. This is a population that does not consider itself racist, but nobody does, that is politically to the left, and very pro-critical race theory, and they were very angry about the money we were sending to these Black schools. I interviewed 20 journalists, activists, elected officials, and board members and came up with three factors that led to this explosion of charter schools: our political-machine history; the status of being a state capital where people could build this network and show it off; and the number of Catholic schools.

On findings that surprised her:
The natural second part of my research was: Why is there such a racial divide? I interviewed 30 parents – parents who chose to stay in their neighborhood school, those who chose a magnet school, and those who chose a charter school. I started to see a Black power or racialconsciousness approach. One mother said she wanted her son to have more racial pride. His charter school was using African names on classrooms and for words like “hope,” and “inspire,” and not just in one language. She wanted the Afro-centric approach that was more Malcolm X, whereas my original approach had been more Martin Luther King. Instead of Black History Month, they are getting Black History Year.

AS TOLD TO JANE M. GOTTLIEB