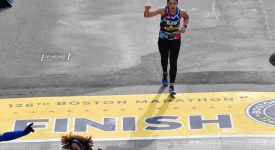 Niki Tsiotos ’19 successfully ran the Boston Marathon. Though she had never run a race before, she took on the marathon and joined The Angel Fund team to raise money for ALS research, inspired by an uncle living the disease. Niki raised over $14,000. A three-year Golden Knights basketball player, she shared “I thought that basketball pre-season was hard, but running the marathon was one of the hardest things I’ve ever done in my life.”

Kevin Bohen ’18, Matt Dalton ’17, Patrick Flores ’16 and Brian Chiappinelli all met while studying in the music industry program at Saint Rose. Today, they make up the band Bad Mothers and making a name for themselves. Signed to label Black Country Rock last year, they recently won an Eddies Music Award for Metal/Hard Rock Artist of the Year. For more information or to purchase their debut album, visit www.badmothersmusic.com. 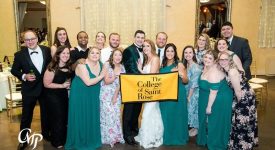 Kaitlyn Rooney and Saint Rose alumni friends at her wedding.

Melanna Carroll G’11 was appointed chief people officer at Fresh Consulting. This new role will cultivate talent and help propel them into the future.

Rose Matera Giglello ’85, G’87 is the current president of the South Colonie Board of Education and has served the board since 2012. She recently won re-election to the board.

Karen Bradley ’78 has retired from her distinguished career as a librarian. Though she started as a volunteer on a renovations committee in the ’80s, she retires as the executive director of the Schenectady County Library System. Before retiring, she received a New York State Senate 2022 Outstanding Librarian Award.