Marika Laurendeau took a major leap to reach her goals by coming from Sainte-Julie, Quebec, to Saint Rose. At Saint Rose, Laurendeau took both her academic and athletic success to a new level by excelling in the classroom as well as on the field, leading her team to compete in the NCAA championship game in December. She's already earned a bachelor's degree in biology, and following the completion of her MBA, she plans to take her athletic career to the professional level in Europe. 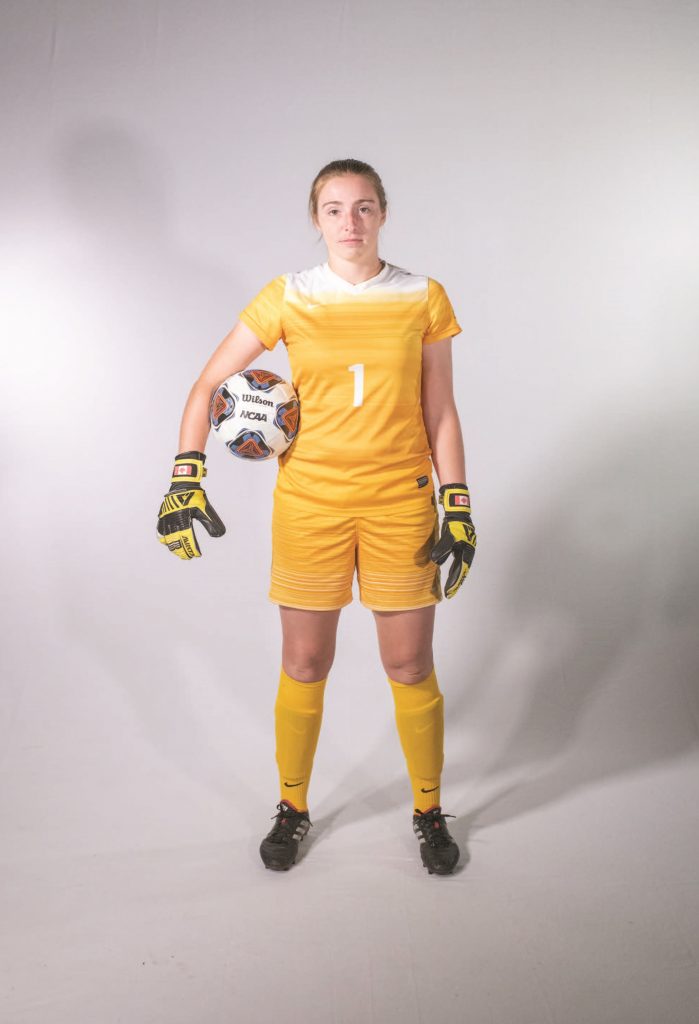 How and why did you decide to pursue your soccer career at Saint Rose?
Initially, I had never planned on coming to the United States. It all kind of just happened in the blink of an eye. My recruiting coach at home had questions about recruiting in the states and somehow was referred to the head coach at Saint Rose. Coach Laurie [Darling Gutheil] was looking for a goalkeeper so I saw it as an opportunity. She reviewed the film we sent over and liked what she saw, so she invited me to start attending clinics. From that point on, it was set in stone. Upon visiting the school, I loved every aspect of it. Saint Rose was very welcoming and presented me with many chances to improve my English. I did end up spending my first year at home, so I could make sure I was fully prepared.

What challenges have you faced and overcome – both inside the classroom and on the field?
One of the most challenging things I had to initially face was the language barrier. My English was far from perfect, but as my time at Saint Rose went on, my English drastically improved. It was especially tough, though, as a goalkeeper because a goalkeeper is supposed to be one of the main sources of communication within the team. I also battled with injuries, specifically when I injured one of my fingers, which is certainly not ideal as a goalkeeper. I made sure I properly recovered so I could return to my full playing potential. Most student-athletes find the experience to be very demanding and tough at times.

Reflecting on your life as a student-athlete with professional aspirations, what have been your motivations, and what has helped you push yourself to the next level?
Being a student-athlete, it was definitely very demanding and quite challenging from time to time. I understood the importance of education, so that became one of my main focuses. My coaches were very understanding and supportive and knew that I really wanted to be the best I could be, both on and off the field. I would consider myself a bit of a perfectionist, so I always made sure I put my best work forward, especially in the classroom and on the field.

Has your time on the Saint Rose women’s soccer team helped you improve or grow as a person? Along with this, how would you label the relationships you created with teammates?
Coming to Saint Rose, I was a very shy person. I did look up to one of my captains, Morgan, who helped me improve my confidence and ambition. I was always a lead-by-example person, but coming to Saint Rose, I developed my leadership skills as a vocal leader, especially on the field. A team cannot operate without communication, and I knew the team chemistry would be much better if we were all on the same level. Me improving my personal skills helped benefit the team as a whole and really strengthened our relationships. This past season, you led your team to the NCAA Division II championship game. Discuss this journey and the emotions that came with it. Initially, I was not sure if we were even going to have a full season because of COVID. Despite this, I was certain that I was not going to waste a year if it meant I had a better chance at going pro. It was uncertain, at first, how well we were going to do because, at the time, we were essentially building a new team. We had a lot of potential though, and we just had to take advantage of that, which we did. From there on, every game was a battle, and we gave it our all. We fell short in the championship, but we all knew we were an amazing team with such a bright future.

What have been your major accomplishments over the past few years? This can include academic awards, athletic awards, etc.
Reaching the Final Four was a major accomplishment, one of my most memorable. Aside from that, I received some individual awards, which I am grateful for, but I believe every award I earned was for the team as a whole. I also got the award for player of the year, which I did not expect, but I was very proud of. As for academics, I received the General Chemistry Award, which I considered a great redemption because I was struggling with chemistry at home.

Where are you playing soccer now? What is it like playing professionally?
Currently, I am playing soccer in Quebec, which is where my “pro” league is. Canada does not have any true professional leagues, so until I can begin playing in professional clubs in Europe, this is where I am at. I am going to play this season here, then start looking for recruitment opportunities between April and May.

You had a heartbreaking loss in the national championship game. How did you help your teammates through those emotions?
I believe at the end of the championship game, no one really knew how to react. There was a lot of anger on the field because of the confusion from the goal that was called back. So, in the end, there was initially a lot of anger and confusion. I personally was very sad because I knew my career at Saint Rose had come to an end, but it was important to be encouraging towards the younger classes because they still had more seasons to come. No player had any personal blame to put on themselves for our loss, and I told many of them that if they held this confidence, they could be right back here the following season. I personally believe we deserved the championship title this year, but not everything always turns out how you want. You just have to get back up and work harder next time.

As told to PETER GALICA