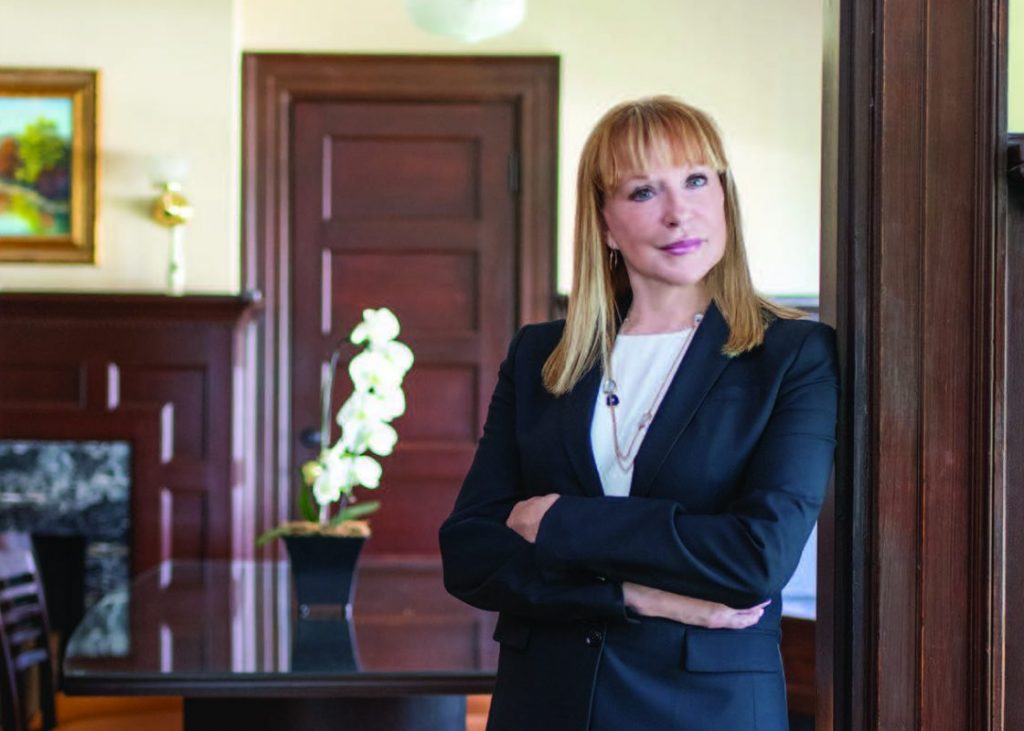 Marcia White to serve as president until June 2023

In August, the Saint Rose Board of Trustees announced it had voted unanimously to appoint Marcia White ’00, who had been serving as interim president of Saint Rose since June 2020, as president of the College through June 2023. White, a Saint Rose alum and trustee for 18 years, has initiated a turnaround of the College and created a culture of transparency and collaboration. In addition, she has formed partnerships with Capital Region college presidents, Albany elected officials, and local business leaders.

In academic year 2020-2021 – the 100th anniversary of Saint Rose – White raised $5.7 million and developed a multiyear financial plan. Working with campaign chair and Saint Rose Trustee George R. Hearst III, publisher and CEO of the Albany Times Union, White is leading “To the Second Century: The Campaign for the College of Saint Rose,” a $50 million fundraising eff ort that will continue into 2025.

“The last year has been challenging,” White said at the time of the announcement. “We’ve had to adapt to a pandemic. We’ve had to make budget cuts that resulted in the loss of employees and programs. We are turning an important corner because we did the hard work. I can’t thank the College’s trustees, students, alumni, and employees, who make up such a vibrant community, enough for their support of Saint Rose.” 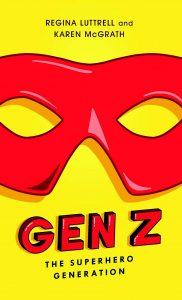 Each generation, it seems, looks down on those that follow. Professor of Communications Karen McGrath believes the distinctive traits of every wave of young people present opportunities – even if they take some adjustment. “Even Elvis wasn’t welcome right away – he wiggled his hips,” she notes. “But things change. And as a professor, I need to ask, ‘How can I be eff ective if I don’t see what’s underneath the behavior?’” It led her to co-author the 2016 book “The Millennial Mindset: Unraveling Fact from Fiction” (Rowan & Littlefi eld Publishers), which has since been used at conferences and workplace trainings to help members of diff erent generations to coexist within organizations.

Now McGrath (an early Gen Xer) has written “Gen Z: The Superhero Generation” about those born from the 1990s to the 2010s. The “Z” work, like the Millennial one, is co-authored by Saint Rose alum (also a late Gen Xer) Regina Luttrell ’08. “Gen Zers are so many things because of the generation in which they are raised. They have to fi gure out a balance between real-world, in-person interactions and those they have in online or virtual worlds,” McGrath says. “These worlds can collide quite easily, in ways both intended and unexpected.” 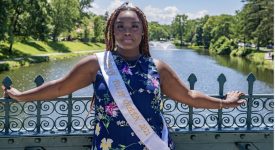 Ashanti’ Bishop ’22, a Capital Region native and early childhood education major, was named Tulip Queen at Albany’s Tulip Festival in June 2021. She plans to use her new platform to focus on community safety and raise awareness about the importance of community relationships, as well as foster literacy throughout the region. The first Tulip Queen was named in May 1949, and there have been a few Saint Rose students who earned the title over the years (Jennifer Gould-Lobban ’01 in 2002, Juliana Hernandez ’09 in 2009, and Emily Barcia-Varno ’18 in 2019).

“Three years ago, I had no idea where I wanted to go to college. I
was looking for a place that felt like home and would keep me close to my family while still allowing me some freedom to explore,” says Bishop, who is from Watervliet, New York. “Saint Rose is right in the center of Albany, and it is surrounded by amazing small businesses and beautiful nature, and truly does feel like home. I have a strong connection with Albany because of Saint Rose, and I am inspired to make the world a better place in hopes that our small town will, too, reap the benefits.” 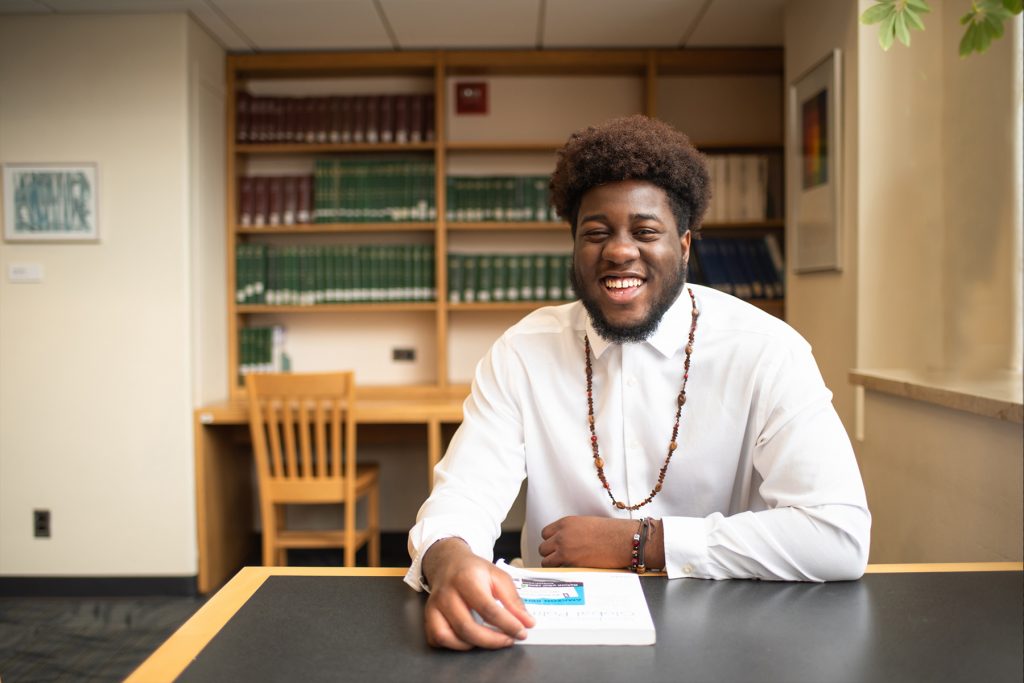 Each year, the New York State Assembly Legislative Internship Program names Paper of the Year Award recipients among interns who have authored exemplary research papers. Of 90 interns, only 11 were nominated. Saint Rose was proud to have two students recognized.

Mark Edem, a political science major who will graduate in May 2022, was one of three award recipients, and Brianna Casserly, a political science student who will graduate in December 2021, was among the 11 nominees. Edem, an intern for Assemblymember Demond Meeks from the 137th District, wrote about raising taxes on New York’s highest earners in order to raise revenue for education, housing, and other public services while creating incentives for said high earners to remain in New York.

Edem comes to Saint Rose from Lesotho, a country in the southern part of Africa, and says the research paper was evidence of his dedication to understanding the intricacies of New York, as well as American politics. “I think it also suggests an interconnectedness across global political systems,” he says. “So, while there may be nuances in American and Lesotho politics, they operate quite similarly.” After graduation, Edem plans to eventually return to Lesotho and pursue political office. 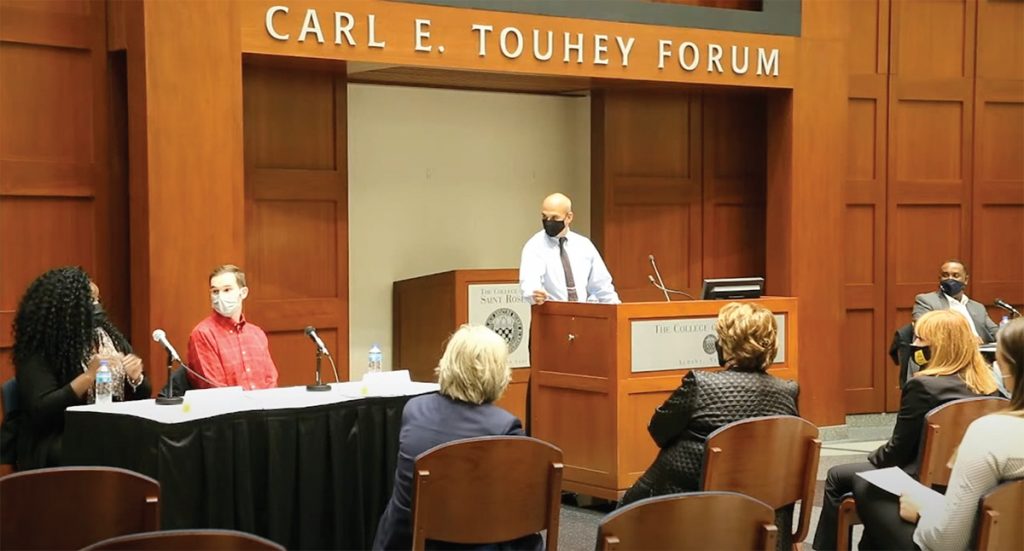 f
The College of Saint Rose has formed a new partnership with the UpState New York Black Chamber of Commerce to create a bridge between the students of Saint Rose and the chamber’s more than 100 members from the Capital Region, west to Buff alo, and south to the Hudson Valley.

The partnership kicked off with a career-preparation series for young professionals and college students throughout the region called “Beyond the Books: Developing soft skills for your career.” The goal of the series, which opened with a panel discussion on September 30, is to educate young and emerging professionals about communications, networking, organization, and other skills necessary to succeed. Each session will feature a diverse panel of professionals from both the business and education sectors. 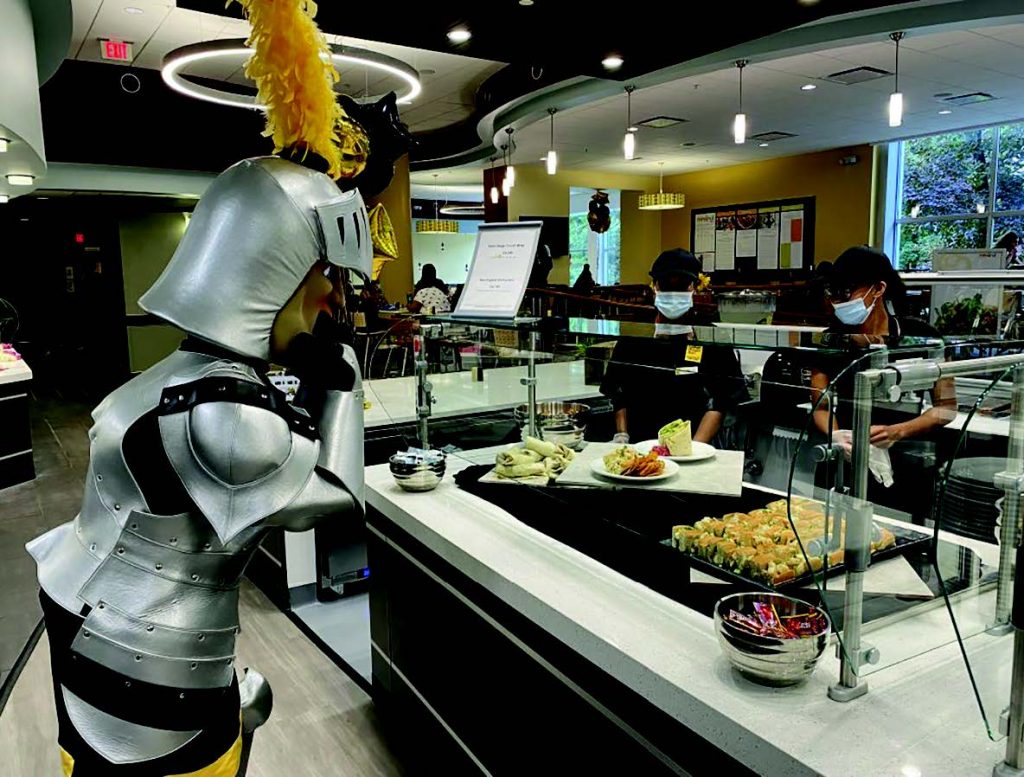 From acai bowls to brick-oven pizzas to made-to-order mac and cheese, Sodexo, the College’s new hospitality services provider, showed off its new menu and its new dining hall renovations at a ribbon-cutting ceremony held during the fi rst day of classes on August 30.

Sodexo began as the College’s new food service provider in January 2021, and this summer the company paid to renovate the College’s dining hall. The new, bright space includes gleaming subway tile and stations dedicated to allergen-free foods, vegan diets, and made-to-order grill items. An ice cream station, which will serve gourmet ice cream made in house, becomes a smoothie station in the mornings and a milkshake station for specialty nights. Another area can host guest chefs, including professors and local notables. 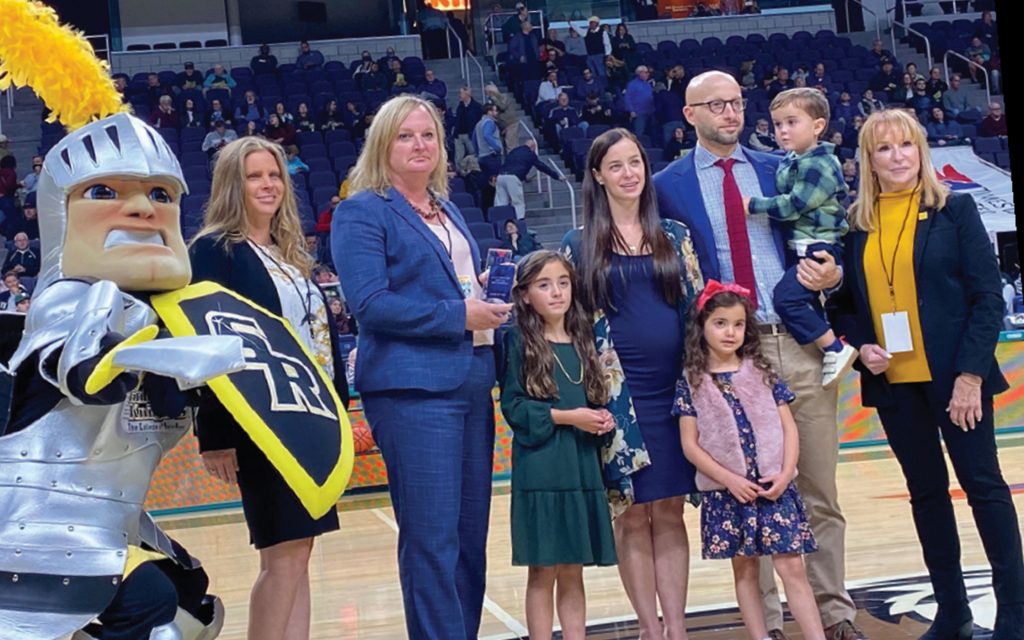 Former All-American men’s basketball player Steve Dagostino ’08 has been elected to the Northeast-10 Conference Hall of Fame. He becomes just the third representative from Saint Rose to be inducted, joining the 2011 national champion women’s soccer team and 2007 national champion diver Brandon Birchak ’08, who were enshrined together in 2018.

Dagostino is owner and coach of Dags Basketball, where he has worked with NBA and Division I college players, among others, and served as court coach for the USA Basketball Junior National Team. In the NE10 Hall of Fame, he will join an exclusive group of just 90 former student-athletes, only a dozen of whom represent men’s basketball.

He was honored in a reception at the Times Union Center on October 25 in conjunction with the Golden Knights men’s basketball exhibition game against Siena.

“To be inducted in to the NE10 Hall of Fame is an honor that for me I couldn’t fathom when I started my career at Saint Rose,” says Dagostino, who was inducted into the Saint Rose Athletics Hall of Fame in 2018. “Basketball is a team sport; without the success that my teammates sustained over our four years, this wouldn’t be possible. It was a heck of a ride.” Dagostino led Saint Rose to three NCAA Tournament appearances and an 85-37 (.670) four-year record.

Typically, the College recognizes faculty who have retired, have reached employment milestones, or are achieving emeritus status or rank and tenure promotions with an annual gathering in the spring. Due to the COVID-19 pandemic, the annual in-person celebration has not been able to occur for the last couple of years. Instead, the College recognized these important members of the College community in a video ceremony that covered 2020 and 2021.
Lucy Bowditch and Barbara Ungar earned the 25-Year Award in 2020, and Paul Conti, Lisa Kannenberg, and Deborah Kelsh marked retirements. There were no 25-Year Award recipients in 2021. The retiring faculty were John Avitabile, Lucy Bowditch, Ann Breaznell, Paul Evoskevich, Frank Fitzgerald, Barry Hughes, K. Michael Mathews, Khalid Mehtabdin, Mary Alice Molgard, Sister Mary Anne Nelson, CSJ ’72, G’76, Joanne Powers, Ismael Ramos, Thomas Santelli, and Kristine Tolmie. The virtual ceremony can be found on the College’s YouTube channel: www.youtube.com/collegeofsaintrose. 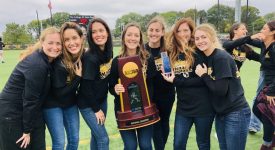 The 10th anniversary celebration of the Saint Rose women’s soccer program’s 2011 NCAA national championship title was an emotional one for head coach Laurie Darling Gutheil. Not only did so many of her alumni return to Saint Rose on November 6 to celebrate the milestone, they surprised her by announcing a $70,000 gift to the College.

“Just like we benefi ted from those who supported us, we want to support the program and The College of Saint Rose how we can,” said Renae Ransdell ’05, a member of the Saint Rose Athletics Hall of Fame who still serves the program as an assistant coach.

In September, Saint Rose was named a top 25 institution for undergraduate teaching, meaning professors who are great teachers, for the second consecutive year in the U.S. News & World Report Best Colleges 2022 rankings. The College was ranked 24th among Regional Universities North for its commitment to teaching undergraduates. The College was also named a top performer for social mobility, “by enrolling and graduating large proportions of disadvantaged students awarded with Pell Grants.”