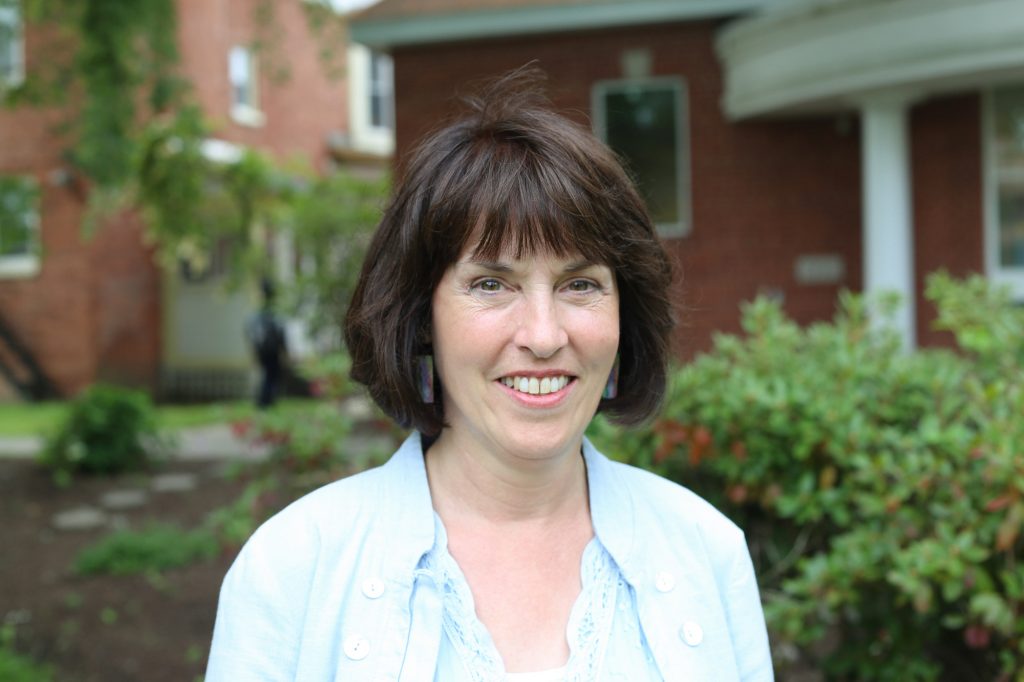 Every year, a number of Saint Rose students arrive on campus unaware that they are looking for someone like Joan Horgan. They may have their major, sport, interests, and points of view in mind. But Horgan invariably helps tie it all together.

Students are likely to find her in the Interfaith Sanctuary, the brick building with floor-to-ceiling windows along Madison Avenue and swirling stained glass on both sides. Maybe they come for a club meeting or lecture, to join a Mass choir, yoga class, art project, to worship quietly, or just break from exams and roommates.

When they meet Horgan, sometimes over a snack or pot luck dinner in the cozy lower level, they might wind up with a question, idea, or a problem to share. When that happens, she is not easily diverted, no matter which of dozens of programs she’s in the midst of planning.

“We want people to feel seen and heard,” she said one afternoon over the summer, when she had a chance to regroup. “I think it’s so needed by so many people in so many places.”

As director of the Office of Spiritual Life, Horgan spearheads efforts around faith, community service, and social justice. She is a bridge between academics, activities, and personal well-being.

If she starts on the periphery when a student signs up for a food drive or community discussion, she often winds up central to the experience of being here.

Case in point: Maria Hartz ’17, who met Horgan as a freshman when she joined the annual service trip to Washington, D.C. Soon, she found herself spending as much time in the Sanctuary as basketball players spend in the Nolan gym. Hartz headed the Better Together student interfaith club and planned social actions and service projects including the biggest one – Reach Out Saint Rose.

“I can wholeheartedly say that I would not be in the place I am in my life without Joan. She got me through personal, familial, and spiritual struggles both during my time as a student and in the years since,” said Hartz, who is pursuing a master of divinity, with a concentration in theology and social justice, at Northeastern Seminary in Rochester.

“Joan helped me realize what was most important in my faith, look for a new place of worship, and also just held space to be uncomfortable and unsure,” she added. “Ultimately, she showed me first hand that ‘loving the human’ was most important.”

Horgan’s story, like the student’s, evolved at Saint Rose.

Raised in Schenectady, she grew up in a family steeped in Catholicism. For Horgan, this was largely expressed through music, as she took part in her church choir – preferring a spot near the back.

After high school, she commuted to University at Albany, where campus size and logistics proved overwhelming. Her father died unexpectedly, making college still more stressful. After sophomore year, thanks to new financial aid opportunities, she transferred to Saint Rose to study social work and art. (Her mother, Joan Spelter ‘80, meanwhile, completed Schenectady Community College and then joined her daughter at Saint Rose to study sociology, with a social work concentration.)

Horgan recalls the relief of having professors who got to know their students and were available to meet. She embraced her classes, though, ironically, was not very involved with campus activities. She was also not particularly political – thinking instead about helping those living with mental illness or abuse.

After graduating, she became a school counselor at Notre Dame-Bishop Gibbons High School in Schenectady and ran the music ministry. She also pursued her MSW at UAlbany. College ministry beckoned.

On the advice of a friend, Horgan contacted Father Chris DeGiovine, then Saint Rose dean of spiritual life. He hired her in 1993 to fill a one-year vacancy as associate director. Then, when the person whose place she took returned to another position the job was hers.

As she engaged with a wider swath of students her ideas took shape.

“I started growing in the job for myself and for our students and our whole college,” she recalls “I could start to see what it could be.”

There was plenty of momentum. Saint Rose created an Office of Community Service and Father Chris began to put Saint Rose on the map as a center of interfaith dialogue. In 1997, the Sanctuary opened, providing space for region’s clergy to discuss their beliefs and how to address problems together. Students came to tackle social issues, plan food drives, or just relax.

Early on, Horgan saw the need to do more than talk about poverty and inequity. In 1995, she started an annual January trip to Washington, D.C., where students worked in soup kitchens and shelters for a week. In time, she brought in local activists and advocates to address the roots of poverty and asked students to reflect on their experiences and the advantages they enjoyed. Today, participants also meet with members of Congress to share what they have seen and push for change.

“The point wasn’t to serve meals, feel good about it, and go home,” she said. “We were asking students to understand things more deeply. We want them to hear about other people and feel humbled and inspired to act.”

In 1996 she launched Reach Out Saint Rose – by far the largest student event – which draws hundreds who assist more than 50 nonprofit groups across the Capital Region. Also, she works with Better Together and other faith-based student clubs, the campus gospel choir, and efforts to build skills for happiness.

She leads prayer and musical services of many types, perhaps in tribute to individuals enduring poverty and violence close to home or disenfranchisement around the world. Horgan plans programs to assist communities hit by natural disaster. She helps students draw, sing or meditate through their stress. She visits classes and asks students to reflect on what breaks their heart – an exercise reflecting unity in a society she believes works too hard at putting up walls between us.

Her scope has expanded more as Saint Rose evolved from its Catholic roots. Meals, holidays, programming, and calls to action now also relate to Islam, Judaism, and other faiths – as well as people who don’t ascribe to a particular tradition.

The job stays fresh, she said, because year by year, students and her colleagues broaden the dialogue. This coming year, Horgan expects to work with students who were quarantined, perhaps got sick, or lost loved ones to COVID-19, or who are negotiating the challenges of getting through the experience.

Much like professors and coaches, she sees the impact her work, and Saint Rose, has on students as they move on from campus to create lives connected to service. They might include joining the clergy or campus ministry, pursuing law, education, or social work, or leading civic organizations.

“So many see the value of using their work life to help others have a better life in a whole wide range of ways,” she said. “When I get to speak to them I am always inspired and grateful to hear how ‘the dear neighbor’ is always before them in the work they do whether they speak that explicitly or their lives do.”