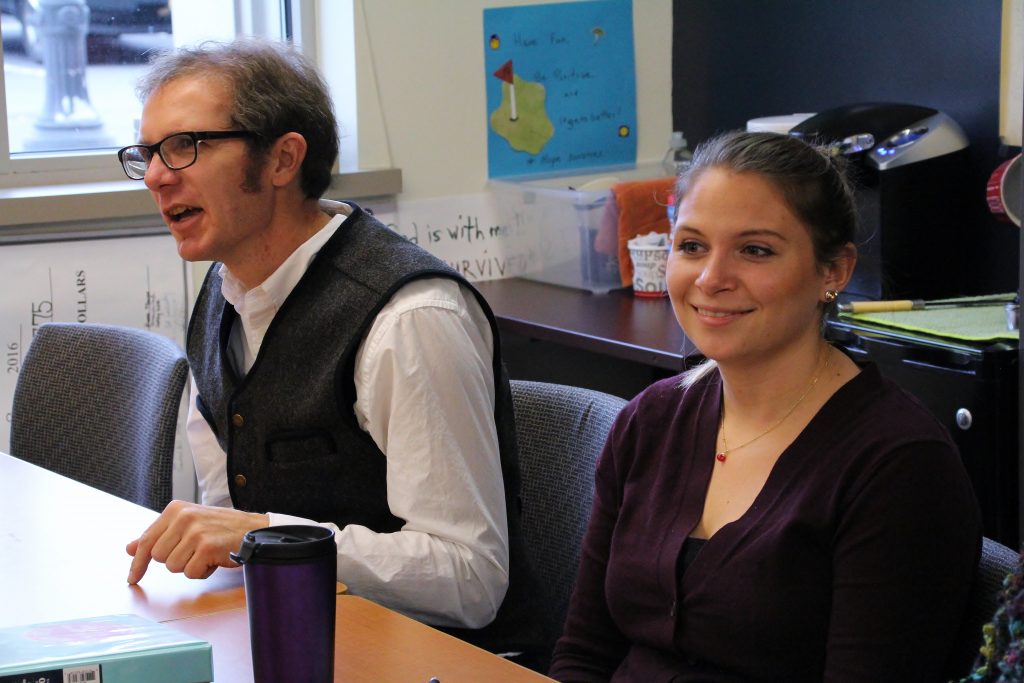 Matt Latiolais was laying plans to start a Christmas tree farm in Vermont with his wife, Keri, while working at a lumber mill to save up money. But a fall there shattered his skull and cost him his speech and much of his mobility. His goals instantly shifted to surviving, then regaining basic functions. The couple relocated to Kinderhook, where Keri Latiolais began work as a farm manager.

After a while, physical therapy helped Matt Latiolais walk again and regain some use of his shoulder and arm. But three years into speech therapy, his progress stalled. The couple then learned about the therapeutic programs at Saint Rose that center around simply talking to others.

Today, 11 years later, Latiolais has recouped so much language that he plays a mentoring role in group discussions that take place a few times a week in the Winkler Center. A natural conversationalist, he revels in asking questions and calmly following up.

During one such group, Latiolais looked participants in the eyes and allowed them time to shape their words. Like each of them, he has struggled to make himself heard in a world that assumes they lost their ability to think when they lost communication skills to an accident or stroke.

The traditional approach of individual speech therapy may help people master individual words, but not the conversations they need to function outside the home. The Saint Rose approach, however, which is a collaboration between the Winkler Center and the academic program in communication sciences and disorders (CSD), allows them to tackle their challenges together.

“This group therapy is influenced by what people actually do,” said Julie Hart, a speech pathologist who is director of brain injury services at Saint Rose. “Their injuries might be severe, but they have a lot of life ahead and they want to play a role in their communities.”

And more times than not, Hart says, the brain rebuilds neurons that make it possible to enjoy family order food in a restaurant or ask for change for a bus.

Conversation groups in the Winkler Center sometimes move to the Camelot Room, or to a local diner, where Latiolais and clinic friends apply their skills together. He is proud that he has played a part in helping others.

“I know that I, myself, need a lot of time to put words together, so I am able to give that to others who are struggling,” he explained. “We all know what we’re going through, so it’s easy to give each other what we all need to process our thoughts. It’s a really supportive environment for all of us.”

To guide him through this tedious process, he carries a laminated cue card that reads “Slow Down, Gentle/Relax Throat, Deep Breath.” With encouragement from the group, he has even begun a woodworking business – working with one hand to make tools and simple items for people with the use of one hand. He looks ahead with both hope and realism.

“My goals are to continue healing – that’s going to be a forever goal,” Latiolais said. “I want to continue working on my speech and being a part of the community at Saint Rose.”