Every month, we find ourselves short on Class Notes from classes before the 1990s. We want to share all of our alumni’s accomplishments, but we don’t know what you’re up to if you don’t tell us. Please email us at alumni@strose.edu with your news, and write “class notes” in the subject line.

Stephanie “Annie” Scherer ’20 released her first full-length album “Garden Bed.” Each song on the album was written during her time as a student at Saint Rose.

Daniel Martinelli G’15 has been named assistant superintendent for educational services by the Cohoes Board of Education. 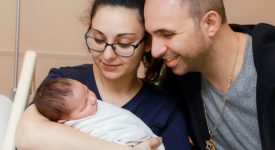 Congratulations to Regina K. Iannizzotto Antebi ’13 on the birth of Tehila Adina Antebi.

Regina K. Iannizzotto Antebi ’13 is excited to announce the birth of our baby girl! Tehila Adina Antebi was born August 22, 2021.

Matthew Babula G’13 has been appointed as a specialist in the Academic Advisement Center at Herkimer County Community College.

Alyssa Northburg ’12, G’13 was named Teacher of the Year at Edward Best Elementary, part of the Franklin County School System in North Carolina.

Katherine Broderick ’04 has joined Livingston Energy Group as the Director of Community Engagement.

Matthew Babula G’13 has been appointed as a specialist in the Academic Advisement Center at Herkimer County Community College.

Alyssa Northburg ’12, G’13 was named Teacher of the Year at Edward Best Elementary, part of the Franklin County School System in North Carolina.

Rebecca Relyea ’06 joined the faculty at the Massachusetts College of Liberal Arts (MCLA) as an assistant professor of radiologic science.

Suzanne Maloney ’98 has joined Northern Rivers Family of Services as the coordinator of the Bella Greenhouse and Educational Center.

Kevin Graber ’92 was named the Northeast Region Coach of the Year by the American Baseball Coaches Association (ABCA). This is his second honor in the last three seasons. Kevin is the varsity baseball coach at Phillips Academy Andover.

William “Bill” Foster ’85, an attorney at Barclay Damon with over 30 years experience, has been named to the 2021 Upstate New York Super Lawyers list.

Kimberly Brooks Penman ’84, G’86 retired from Albany High School, where she served as a special education teacher for 34 years. This concludes a wonderful career in education spanning over 35 years.

The Rev. Leonard Comithier Jr.’72, a pastor at Macedonia Baptist Church for over 35 years, is being honored with the prestigious Rev. Joyce Giles Pastoral Award by the Capital Area Council of Churches (CACC). Honorees are chosen who demonstrate outstanding pastoral ministry and exemplify racial, gender, and denominational inclusiveness.

Floranne (Flo) Smith McCraith ’57 is happy to report she is retired and living happily in Florida with her wonderful husband Bob. They are enjoying keeping up with their 16 children, 38 grandchildren, and 20 great-grandchildren.