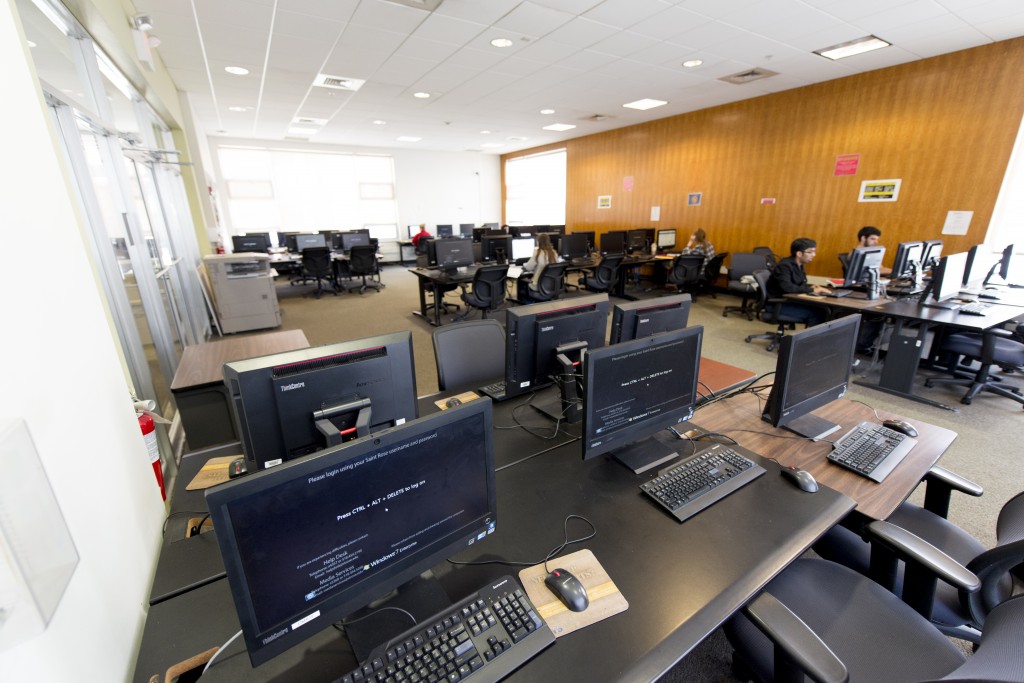 Saint Rose students received their first taste of computer programming in early 1972, when a course in computer science was offered during the January term, most likely taught by math and physics faculty member Sister Elizabeth Catherine McManus ’32. Before personal computers were invented, anyone wanting computing power had to use a terminal to log onto a mainframe computer – which Saint Rose didn’t have. So, the first Saint Rose computer-science students programmed in Fortran via two Western Union Teletype machines connected to a 360-50 computer at Rensselaer Polytechnic Institute.

Saint Rose had had its own IBM System 3, Model 10 mainframe for office operations since the mid-1960s, but the IBM couldn’t simultaneously accommodate students’ demand for programming practice. In 1976, the College bought “Barney,” a new Burroughs 17-26 computer.

“Barney is new on campus, but you won’t meet him unless you visit the Data Processing room downstairs in the Science Hall,” wrote Noel Mick in Inscape (“Barney Betters Data Processing Here,” March 30, 1976).

As computer technology and knowledge continued to evolve in leaps and bounds, so did Saint Rose’s coursework and facilities. In the mid-1980s, undergraduate programs in computer information systems (CIS) were introduced and computer labs were added to the third floor of the library.

This particular lab was a supplement to the terminal facility previously installed on the first floor of Saint Joseph Hall, and was created primarily to offer students the opportunity to gain a broad range of knowledge of computer information systems as tools within the context of the total liberal arts curriculum of Saint Rose.

So successful in attracting interested students, by 1985-86 the College had its own student chapter of a nationally based organization called the Data Processing Management Association (DPMA). Michael Miller ’87 and Paula Poirier ’87 served as the first two presidents of DPMA.

We talked to Miller, who graduated from Saint Rose with a bachelor’s degree in computer information systems in 1987 and is currently vice president of client services at Dolbey, about those early years of computing at Saint Rose:

Technology has dramatically changed since the 1980s. As SA president, I carried around a K-Pro all-in-one portable computer that was the size of airplane luggage and weighed about 50 pounds (all steel). Today, the phone you carry in your hands is a hundred times more powerful!

Back then, computers were still taking off and making their way slowly into businesses, and later into homes. Today, everyone carries a computer around with them, and each person typically has three to four when you consider each device, laptop, tablet, reader, etc.

You never know when the next turn will come. For me, overcoming the challenges and learning how to create a chapter and having to go through SA to seek funding for a new club was an experience in itself.

Transferring to Saint Rose (from Hudson Valley Community College) not only helped me build a strong relationship with the program chair, Dr. Arvind Deogirikar, but also brought me closer to how student government worked. I and a small group of other students were able to convince the SA budget committee to fund our organization. Once we got over 40 members, we also received funding for an overnight bus trip to the Boston Computer Science Museum.

You never know when taking a chance (combined with some hard work) will pay off. In this case, many of us were able to benefit from several experiences during the semester and attend a meeting with professionals that provided great career opportunities.

The support system that was in place for us to do it was excellent, and we all had a great time with the experience – it was real.

For me personally, that was the catalyst that led to me running for student government president in the spring. I had no prior experience in any role of student government, but I would later be elected president and have a second full year of new Saint Rose experiences that would change my life.