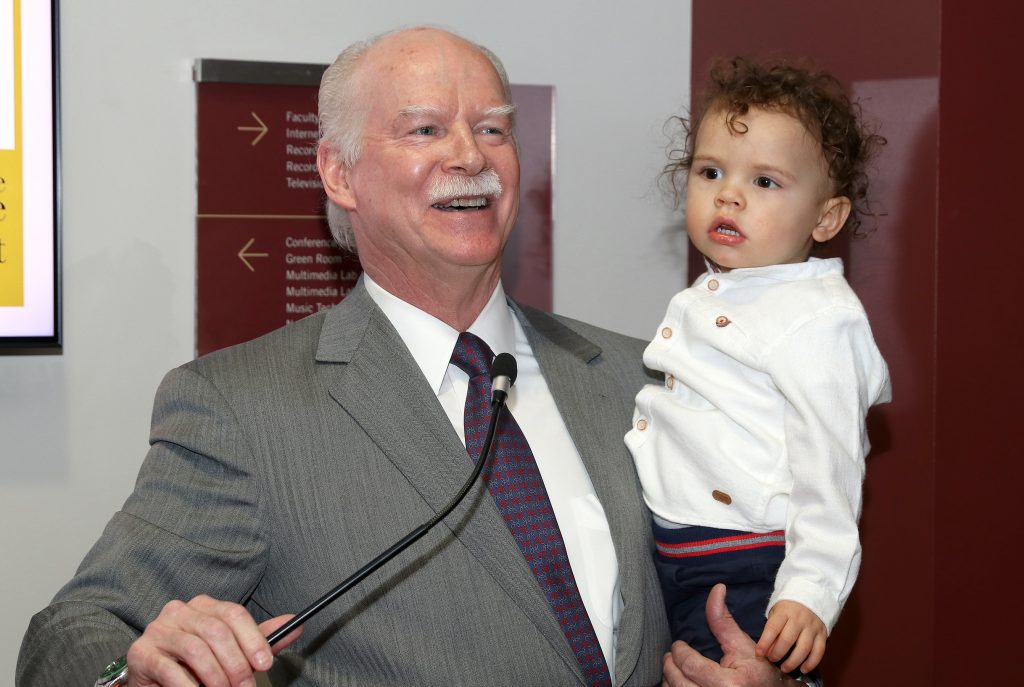 George R. Hearst III with his grandson at the Studio G3 dedication

A Saint Rose Trustee since 2003, George R. Hearst III has lent his illustrious family name to the College for many decades and greatly enriched the Saint Rose experience for students and alumni with his prominence, professional expertise, and visionary leadership in the world of communications.

In 2011, Hearst was instrumental in designing and funding the Hearst Center for Communications and Interactive Media (CCIM), which benefited greatly from a large grant from the William Randolph Hearst Foundation. Studio G3, a state-of-the-art rehearsal and performance space with cutting-edge sound, lighting, and video capabilities that opened in 2019, was made possible by Hearst’s generosity in conjunction with additional support from The Little Red School House Fund of The Community Foundation of the Greater Capital Community.

He has generously of his personal time over the years, serving on the Development and Trustee Affairs and Governance committees as well as the Strategic Thinking Group. He has facilitated the participation of panelists for the Hearst Lecture. And, most recently, is serving as chair of “To the Second Century: The Campaign for the College of Saint Rose.”

In addition, he has welcomed Saint Rose alums to a holiday event at the Hearst Tower in New York City each year except 2006, because of Hurricane Sandy, and 2020, because of the COVID-19 pandemic.

Currently publisher and CEO of the Albany Times Union, Hearst joined the Times Union in 1989 as director of operations and planning, became vice president and associate publisher in 1998, and became general manager in 2006. In 2009, he was appointed publisher. Before joining the Times Union, he had held several executive positions in the San Francisco Newspaper Agency. He has been instrumental in leading multimillion-dollar capital renewal programs involving the implementation of digital publishing standards and content systems for news and advertising.

Hearst is actively engaged in the Albany community, having been instrumental in the return of arena football, as well as being involved in the development of live music concert venues in Albany.

“George R. Hearst III is well known in Albany, and his involvement with Saint Rose has benefited the College in many ways,” said Dr. Gerry Lorentz, Dean of the School of Arts and Humanities. “We see his leadership and generosity everywhere on campus and beyond: from Studio G3 and the Hearst Center for Communications and Interactive Media to the alumni holiday gathering in New York City. We are grateful for his trusteeship, leadership, and friendship over the years.”