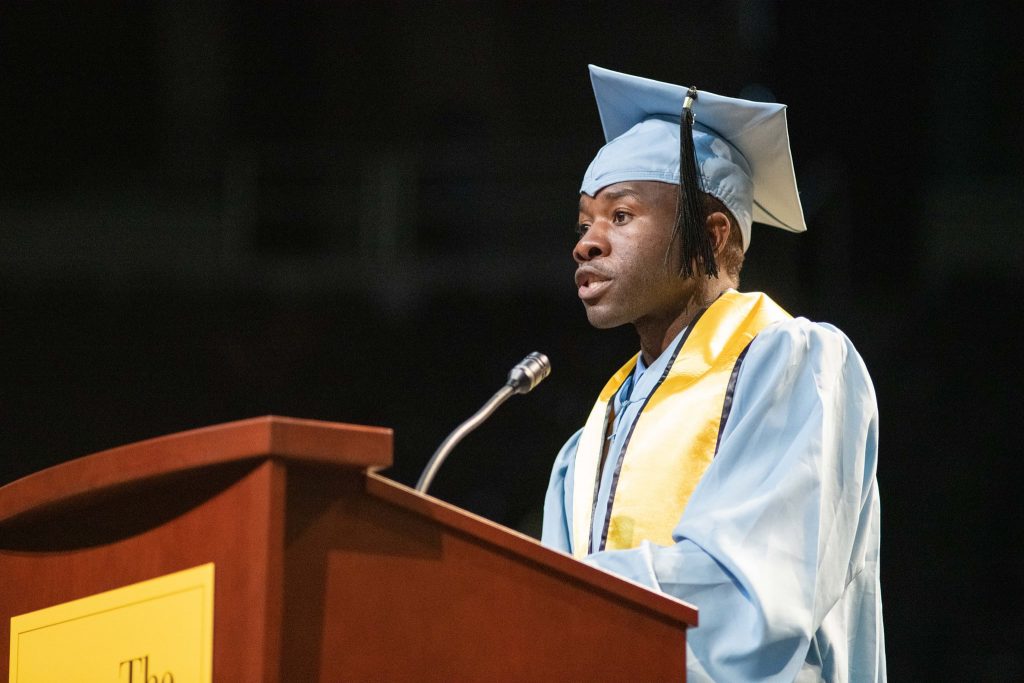 Edson Chipalo ’17 grew up in Zambia as an orphan, in a hut with no electricity. He used a Coke bottle to make a kerosene lamp he needed in order to study. He was forced to leave school at a young age because his family couldn’t afford the fees. So his aunt sold a favorite wall clock to raise money for tuition and examination fees. Later, lacking internet access, he visited embassies to get the addresses of overseas colleges he wrote to inquire about admissions.

“I knew from the early stage of my life that education was the only way I would get out of poverty,” Chipalo recalled.

He shared this story with Saint Rose graduates from the Class of 2021 when he served as the commencement speaker.

Getting in to college is an achievement for any student. For Chipalo, arriving at Saint Rose was closer to a miracle. It happened once he began working for a nonprofit organization that posted him in several different countries, including the U.S.

“I loved the college so much, I liked the location. It was small,” he has said. “I received so much support from the professors and my coach and the international programs. Having this unwavering support is a reason I have succeeded in my academics.”

Next, Chipalo earned an MSW (and a 4.0 GPA) from Columbia University, where classmates remarked that his story of deprivation sounded like the case studies they read. They marveled, as well, at his determination and focus.
Today, he is a doctoral student in social work at the University of Alabama, where he was awarded a fully funded fellowship, focusing on relationships between acculturation factors, substance use, and mental health among refugees and immigrants. Along the way Chipalo has helped refugees in Albany access health care, examined mental-health needs of indigenous people in Alaska, and counseled adolescents with depression in Alabama.

His long-term goal is to become a university professor doing research and teaching. Chipalo also remains determined to use his own hardships to empower others whose backgrounds make it hard to imagine a better life. And he often reminds them that college made all the difference.

“I can say ‘you are going through this but I can tell you, you can make it,”’ he said. “What motivated me was when I read Nelson Mandela’s words. He said, “Education is the power we can use to change the world.”