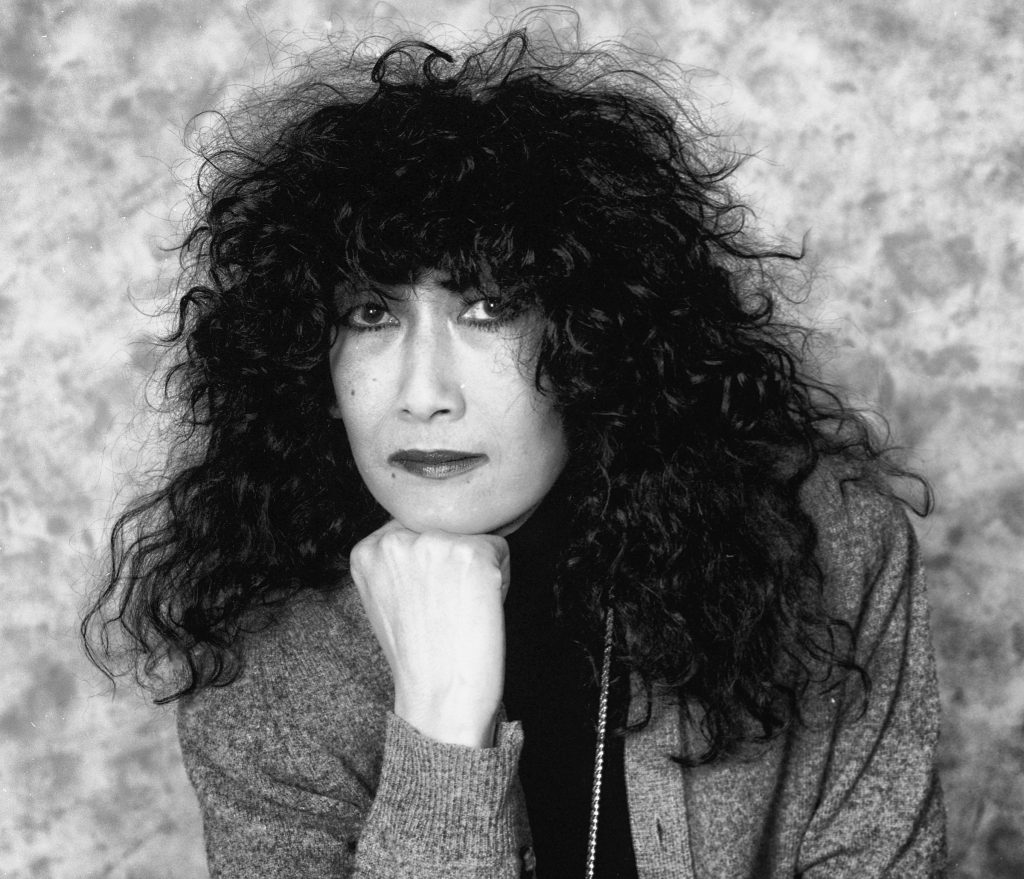 Annie Sheeley, a dining hall employee at Saint Rose who passed away in January, shown during her days working at Spit, a club in Boston. (Photo by Catherine McDermott Tingle)

A large contribution to the College’s Annie Sheeley Emergency Meal Swipe Program, named in memory of a beloved dining hall worker who died unexpectedly in late January, unlocked a mystery for both the donors and Saint Rose.

Jerry Colpitts and his former coworkers raised $2,200 for the fund, which benefits Saint Rose students who are experiencing food insecurity, after he saw the College’s story about Annie’s unexpected death at age 75. He was one of the people who worked with Annie in the late 1970s and early 1980s at a Boston nightclub called Spit, where he was a jack-of-all-trades who served as stage manager, head of security, and DJ, and Annie was the bartender known for her comforting words, listening ear, and willingness to quickly bounce a rowdy customer herself.

The crew from Spit, which was happy to pony up donations for the fund in exchange for pint glasses etched with Annie’s photo, had stayed connected via a Spit alumni Facebook page throughout the years, but they had lost track of Annie, who even back in the Spit days, was known for being a private person.

That’s how Annie was known at Saint Rose, too. In her 14 years at the College, she remembered names and countless details about the students who would swipe their cards at her station in the dining hall, but everyone – from students to the College employees – knew very little about Annie. No family members were able to be located after her death, so the College took care of Sheeley’s final arrangements and held a celebration of her life with students, employees, and alumni.

In honor of Annie’s life, the College’s Student Association created an award in her memory for its annual Student Service and Appreciation Awards, and the College will dedicate an area of the dining hall to her memory this fall. 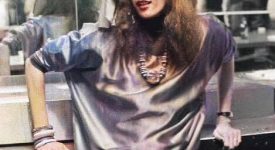 Annie Sheeley when she worked as a bartender at Spit, a punk/alt rock club that once operated in Boston (Photo by Tom Yaz)

When Colpitts sent the proceeds from the fundraiser to the College, he was able to provide more insight into Annie’s life, which was centered on hospitality, whether behind the bar of a punk/alt-rock club or from her station in the College’s dining hall, where she went out of her way to make a transgender student feel seen and appreciated every time they showed up for dinner.

“Annie was loved by all her customers that she served as well as everyone that worked (at Spit),” says Colpitts, now a business owner in New Hampshire. “She was like the mother to everyone – there always with an ear to lend and wisdom to give out. She always was quick to help anyone feeling down. She was also a very beautiful person, as she made all her own clothes. She even sold her clothing creations to stores on Newbury Street in Boston to supplement her income. She was that good.”

When the news of Annie’s passing spread, the Spit alumni group’s Facebook page flooded with memories of her. She was the bartender who wouldn’t tolerate a barback doing things the wrong way. She rejected stingy tips by flinging them at a customer’s forehead to punctuate her thoughts. And she was not to be messed with, known for brandishing a large knife when needed, like the time she protected “the crazy girls,” a group of favorite regulars she had nicknamed, at a party by revealing said knife.

“She came from Thailand, stood almost 6 feet tall, and was half Irish. She can only be described as an iron hand in a velvet glove with a heart of gold,” one of the posts said.

“I always assumed that at the end of her shift, Annie walked out into the night and returned via some magical portal to a mysterious, ancient, spectacular other world. She had that look in her eyes … just visiting here,” another post recounted. 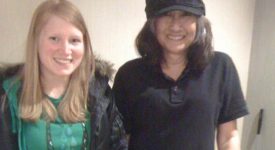 Annie Sheeley with a Saint Rose student in the dining hall.

Students didn’t know these details about Sheeley’s life – that she was once a glamourous fashionista with a rocker’s sneer and a reported brief romance with a Hollywood A-lister (a story she would often tell). But remnants of the bartender who would instruct one of her regulars on which girls to dance with showed up decades later when she told Saint Rose students they were “fabulous,” encouraged them through a difficult class, and looked after them like a true mom away from home.

“When I read the article that you folks had put out about Annie being so loved by all the students and Annie reaching in her pocket whenever a child there need to eat, it was the same Annie that we had all experienced working with so long ago. And it touched my heart because it is also something that I am very passionate about as well, as I think everyone from our club is – that is helping out and giving back,” Colpitts says. “Once we had posted about Annie’s passing, there was such a huge outpouring on the Facebook page that I knew we had to do something to give everyone some closure … She was a very remarkable and memorable person. I’m so glad I got to share some time on this planet with such a loving and talented person as Annie. I loved her dearly, as did everyone.”

And now everyone who loved Annie knows her a little bit more.