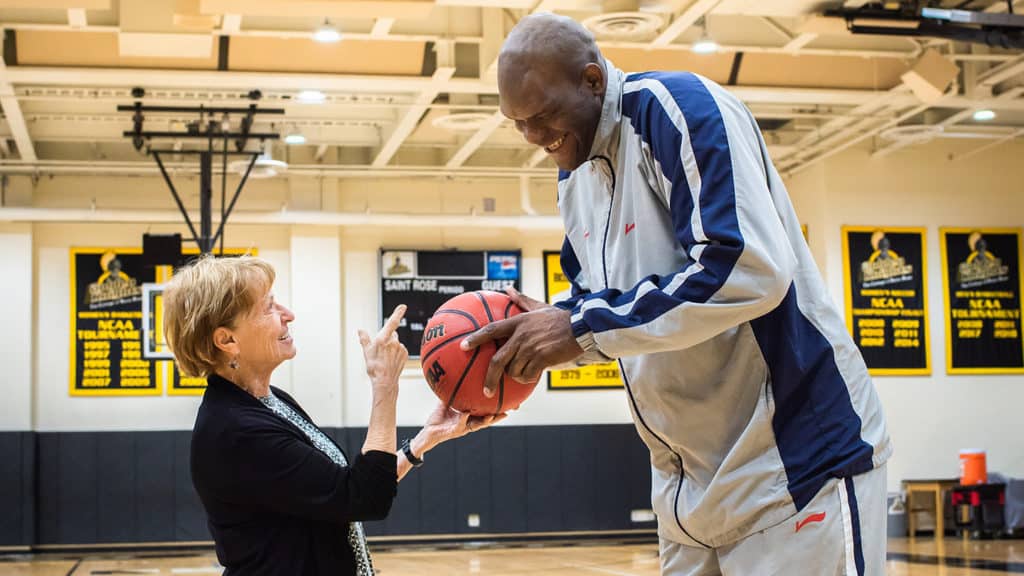 In 2019, on the way to finally finishing his Saint Rose degree after a chance to play professional basketball interrupted his initial plans, Garth Joseph turned heads on campus, and not just because he loomed large at 7-foot-2. Previously a student from 1994 to 1997, he was a basketball standout who had made headlines, and some on campus still remembered him.

A native of Dominica, West Indies, Joseph earned his associate degree there. He wanted to pursue a bachelor’s, but Dominica had no four-year schools. His life changed when then-Saint Rose basketball coach Brian Beaury met him during a goodwill visit and offered him a shot at college and basketball.
He fell in love with his classes, particularly philosophy and religious studies.

The College also helped Joseph hone his skills as a basketball center. His Saint Rose team headed to three NCAA tournaments, and Joseph became the all-time rebounder and shot blocker. Then, he left to embark on what would be an 18-year professional career. After stints in Greece and the U.S., he made it to the Toronto Raptors and Denver Nuggets. His NBA career was cut short by injury, but he continued in Europe and Asia.

Along the way, Joseph married and had four children. He taught and coached in Dominica and repaired his mother’s house there after it was battered by Hurricane Maria. He settled in upstate New York, with his children and wife, Alicia, whom he met at Saint Rose. Ultimately, he circled back to campus to complete his degree, while coaching basketball at Bryant & Stratton.

But what degree would he earn? Joseph needed 30 credits. Those he’d earned didn’t fit a particular degree. Requirements had changed. Coach Beaury and now-retired professor Joanne Powers took the time to figure out the puzzle. The solution? An interdepartmental degree in math, religion, and philosophy approved by Saint Rose.

Earning it meant a heavy class load, a portfolio, and a College Level Examination Program (CLEP) test to earn credit.

“He’s determined, and I’m determined,” said Powers at the time. “I would like him to be whatever he wants to be.”

Joseph returned to a campus with a lot more buildings and a much more diverse student body. He was inducted into the Saint Rose Athletics Hall of Fame in 2017 but never mentioned his history unless classmates asked. He graduated with an impressive academic record and plans for a career in management or coaching.

Today, he is a supervisor at a large distribution center for Hannaford Supermarkets, a management-track position. Joseph also mentors several young men.

Everything that happened to him – meeting his wife, fine-tuning his basketball skills, traveling the world, and completing his degree – started the day he met Coach Beaury.

“Without his trust and confidence in me, I would never have had the opportunity to be there,” he said of Saint Rose. “And for that, I am very, very grateful.”