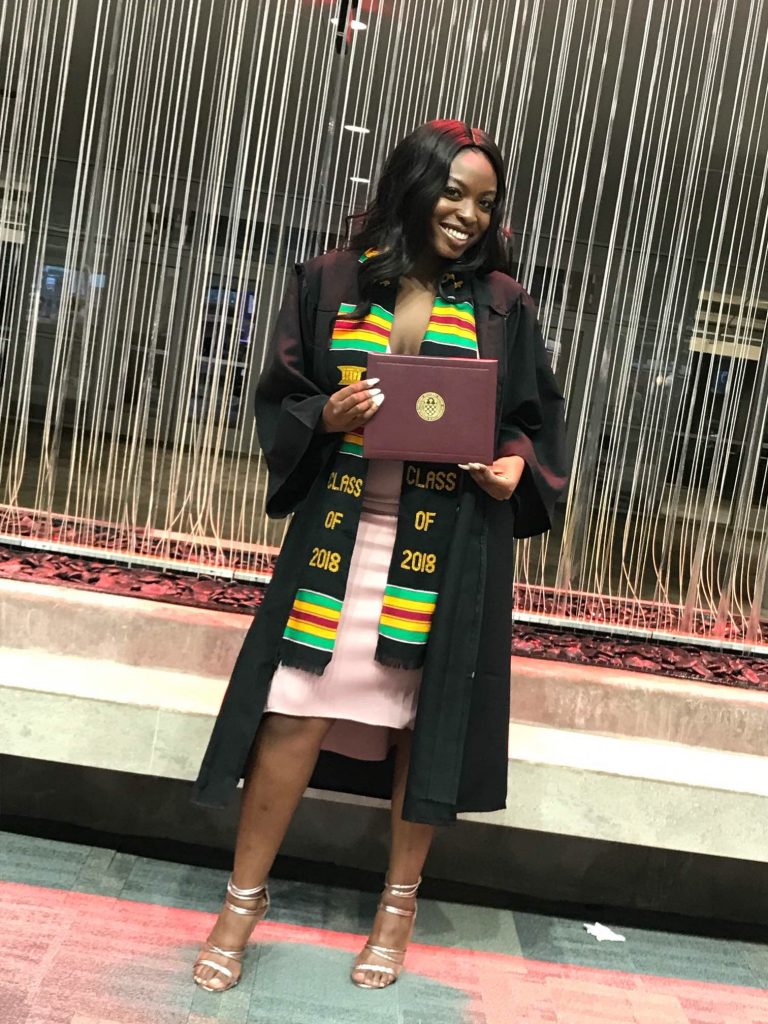 Khia Duncan ’18, an interdepartmental studies major who combined courses in social work and criminal justice, didn’t set out to start the first Black Student Union on campus. Initially, Duncan was just fulfilling the requirements of a class assignment.

A transfer student, Duncan came to Saint Rose with a goal to leave her mark and make a difference at the College. When she was assigned a project that asked her to identify and address a need in a community of her choice, Duncan saw a window of opportunity. While assessing the College’s needs, she found Saint Rose could offer more support for students of color, and how providing that aligned with the College’s mission — a mission that resonated with Duncan and was a major reason she transferred to Saint Rose.

As part of her research, Duncan discovered that as the Saint Rose student body became more diverse over the years, the rest of the campus community was slow to catch up with the needs of students of color by way of academic, emotional, and financial support.

Something needed to change. So, Duncan began researching what other college communities developed to address the needs of students of color and amplify Black voices. She met with the College’s chief diversity officer, who at the time was Dr. Shai Butler, and had many discussions with students on campus. In 2017, one year before Duncan was set to graduate, she became the founder and inaugural president of the Black Student Union.

At its first interest meeting, Duncan estimated a turnout of approximately 80 students.

“I truly came to Saint Rose with the passion and purpose for community and service. I intended to leave behind a legacy in Albany and Saint Rose that would impact the community forever,” Duncan said.

Duncan continued: “I did not necessarily know what or how I would do that, but the community assessment assignment and interviewing Dr. Butler and students at Saint Rose sparked the concept of the BSU to further movements of change and racial equality on campus.”

The Black Student Union was a way for students of color to connect, confront racial inequities they faced on and off campus, and come up with actionable steps to spread awareness and make changes to the social injustices they faced.

Additionally, when BSU first formed, the nation had gone through a tumultuous presidential election, and police violence against Black and brown communities was increasingly being exposed and shared on social media. Mental health was a huge focus of many early club meetings. The BSU became a safe space to talk about painful issues that affected so many students at the College.

When Duncan graduated from Saint Rose in 2018, Tyler Sumter ’19, a forensic psychology major, took over as president of the BSU after serving as vice president. Sumter’s goal was to continue the club’s mission of creating a safe space for Black and brown students and address topics that were not being regularly discussed on campus, such as interracial relationships or police brutality. 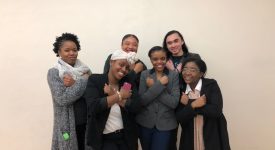 Along with Janay Salter ’20, a childhood education/special education major who was her vice president at the time, Sumter helped organize an event with the Albany Police Department after it was brought to BSU’s attention that a student of color was wrongly stopped by the APD. Students were able to share their stories with members of the APD about times they felt they were wrongfully targeted or had uncomfortable interactions. This event took a lot of planning, and is one of the club’s greatest achievements to date.

Some of the Black Student Union’s other achievements include holding a BSU awards ceremony. Under Sumter’s direction, the BSU created an online system where students could nominate anyone in the student body for superlatives such as “best natural hair” or “biggest advocate for social justice.” Students were able to vote online, and the awards were announced at the ceremony. Over 400 tickets were sold for this event.

“We were trying to highlight minority students’ talents,” Sumter said. “Anyone could be nominated, so we didn’t have control over that, but the goal was to highlight specific attributes that many minorities have.”

Another positive development related to the BSU’s formation is how it spurred other cultural and ethnically diverse clubs and organizations to develop on campus. Additionally, the Black Student Union turned out a diverse group of students at events and activities — not just students of color.

“We offered educational resources that were necessary, but weren’t happening. Everything we did aligned perfectly with the mission of Saint Rose, especially helping the dear neighbor,” Salter said.

“It wasn’t just the students of color who were attending these meetings — there was a diverse group of people who had the same burning questions or wanted a further understanding of topics so we definitely lived up to the College’s mission in that way.”

Salter, who became president when Sumter graduated, was also instrumental in helping reshape campus policies and procedures related to racial bias reporting. Saint Rose, like many academic institutions across the nation, faced a racial reckoning on campus in the summer of 2020 after the murder of George Floyd. Salter, along with other members of the BSU, provided input to the College’s leadership team about how to make bias, discrimination, and harassment reporting an easier experience for students.

“Black Student Unions, in particular, those words are important. A BSU is different from a Black student alliance or organization. BSUs emerged from the Civil Rights Movement as more African Americans entered college and academy to teach and have been much more radical. I know that this name was chosen on purpose, and it is appropriate and necessary. Everything the BSU has done has propelled the College into a state of conversation that wasn’t there before.”

Duncan, although three-plus years removed from Saint Rose, still keeps in touch with Salter and current members of the Black Student Union. The COVID-19 pandemic has stifled some of the club’s progress, but she hopes that when students are back on campus, the BSU can pick up where it left off, and continue to provide resources and advocate for students of color on campus.

Today, Duncan is a lead youth organizer for a youth advocacy and leadership organization called Future of Tomorrow in Brooklyn, New York. Additionally, Duncan is working toward her master’s of science in urban policy and leadership from Hunter College. She said that her experience with the Black Student Union helped her get to where she is today.

“I am helping to organize around divestment of policing in school and increasing mental health supports, and dismantling the school-to-prison pipeline in New York City public schools, and provide more support for students of color,” Duncan said, “Community organizing is important to me, it is my passion, so this is just a natural place for me and where I should be.”