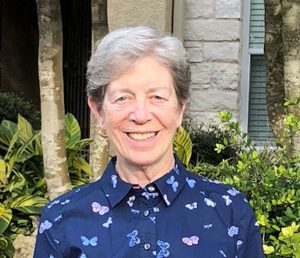 “Whenever anyone asks where I attended college, I proudly tell them about the superb education I got at The College of Saint Rose.”  That lifelong gratitude comes from Patricia Hayes ’65, a long-time New Yorker but a Texan these past 37 years.

The native of Johnson City, New York, had originally planned to attend Cornell University. But when she visited The College of Saint Rose, her mind was made up: She knew she’d found her new home. The welcoming atmosphere and the warm community were two important factors. The intellectual rigor and spiritual focus deepened the attraction. In addition, Hayes loved being surrounded by Sisters of St. Joseph of Carondelet – so much so that, after two years of college, she joined the order.

In 1965, after graduating from Saint Rose with her bachelor’s degree in English and teaching high school science (happily applying her liberal arts education!), Hayes journeyed to Washington, D.C., to earn her Ph.D. in philosophy at Georgetown University. When she completed her doctorate in 1974, she had planned to come back to Saint Rose to teach. But there was no faculty opening in philosophy at that time; so Hayes did what she had to do to rejoin her alma mater. She took on multiple roles in the administration, working successively in financial aid, admissions, and finance.

In 1984, she was invited to St. Edward’s University in Austin, Texas to become its first female president—a mission that continued for 14 fruitful years. In 1998, Hayes joined Seton Healthcare Network as executive vice president and chief operating officer and quickly became known for helping to improve healthcare access for uninsured individuals and bettering work/life quality for employees. In 2006, she moved into an executive coaching and consulting role until her “official” retirement in 2014.

In Austin, Hayes is known as a strong relationship builder and fundraising and networking prodigy. She championed everything from the new Children’s Hospital and public television to the United Way, the National Commission on Migrant Education, and the Mayor’s Commission on Social Equity. She also had a large hand in convincing the NFL’s Dallas Cowboys to make Austin their home for summer training.

Today, Hayes splits her time between Austin and Bar Harbor and plunges happily into her volunteer work—preparing taxes for low-income Central Texas residents. Now, 50-plus years from her Saint Rose experience, she still feels very fortunate for the foundation of critical thinking, social justice, and spirituality she received from Saint Rose and the Sisters of St. Joseph.