For Jeffrey Beale ’77, who majored in studio art at Saint Rose and has filled his private studio with his own works, the arts are a necessary part of life. 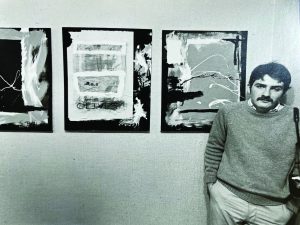 In December 2020, when he heard his alma mater had had to cut art and music programs to remain fiscally sound, he was stunned. “I was heartbroken, and a little angry. I couldn’t believe it,” he says.

At the same time, he knew how difficult business decisions can be. “I think that what good business people do is to sleep on things,” explains Beale, who was a member of the Saint Rose Board of Trustees from 2003 to 2008. “You read the details and realize that we just couldn’t sustain all the programs anymore. You look at the numbers and understand what the Trustees had to do.”

Still, it took him about a week to come to terms with the new reality. “I have been a businessman for many years,” says Beale, who retired in 2018 as chief administrative officer at Eaton Vance Corp. “As sad and heartbroken as you might be, you have to move on and say, ‘Are you going to be a sad sack and mope in the corner? Or do something about it, go on with life, and help, so that maybe one day music and art can come back?’”

Beale chose the second option. “I decided to do the right thing. It’s important that The College of Saint Rose continue for many, many reasons.”

That’s why Beale, who had earlier pledged a gift of $500,000 to Saint Rose, suddenly doubled it to $1 million.

“I hope this is a little bit of a message saying, ‘Let’s not all be angry. Let’s see what we can do to save the College and make things better.’”

Beale named his bequest in honor of three Saint Rose faculty: Sister Bernarda Jaques, CSJ ’48, professor of English literature; Sister Margaret M. O’Donnell, professor of art history; and Karene Faul, art department chair. “I look back on all the people who had an influence on me at Saint Rose, and those three were incredible individuals who had incredible careers of their own and who affected my success.”

He credits Sister Bernarda with teaching him to write. “To look at her, you’d think, ‘This is the most old–school person I’ve ever seen,’” he says. “But she’d start to teach class, and you’d say, ‘This is the smartest person ever.”

A strong proponent of “write about what you know,” Sr. Bernarda held her students to a high standard. “You didn’t dare turn in anything that wasn’t grammatically perfect,” says Beale. “Whether I was writing a memo at work or a short story, I learned to stick to the facts, tell it from the heart, and be truthful. That’s been helpful in business, with everything in life.”

Sister Margaret brought art history to life for Beale. “She would instill art history with her own experiences, and make it fun and inspirational,” he says. “Today, when I go to an opening at the Peabody Essex Museum in Salem, that history she taught comes to life.”

Beale revered Karene Faul for her ability to appreciate each person’s individuality. “She encouraged personal expression. She’d say, ‘Your expression is your expression, and I’ll help you channel it, refine it, fine tune it,” he says.

… and a fourth inspiration

After graduating from Saint Rose, Beale began working as a teacher in Albany, first at St. Joseph’s Academy in Arbor Hill, then at the Academy of the Holy Names. He moved to Cambridge, Massachusetts, where he continued teaching, but was laid off due to district cutbacks.

When Beale decided to try his hand at financial services, his interviewers asked how he could transfer his teaching skills to the new realm.

“I said, ‘Well, I used to stand up in front of 35 seventh- or eighth-grade girls and teach lessons, and you’re asking me to talk on the phone with brokers all day, and I think brokers and eighth-graders are pretty similar,’” says Beale. “They thought that was hilarious.”

He got the job.

“On my first day talking to brokers about the various products I’d been trained on, I thought, ‘You know, they really are like eighth-graders in a lot of ways,” he adds.

He loved financial services, working for more than three decades in the industry and becoming vice president and later chief administrative officer of one of the biggest investment firms in the U.S. “It all goes back to those three women, whom I can hear telling me: ‘Be smart, work hard, and do the right thing, and things will come to you,’” says Beale.

At Eaton Vance, he found a fourth inspiration: Barry Rowland, the previous chief administrative officer.
“He was my boss, mentor, and friend, and the most philanthropic person I’ve ever known,” says Beale, who took over for Rowland when he retired. “He taught me so much that made me successful not only in business, but also in philanthropy,” he adds.

“To what those three women taught me, he added the last part: Be smart, work hard, do the right thing, and give back. I can hear Barry saying that right now to me: ‘You know this is the right thing to do.’We all have to pitch in as part of the greater community,” Beale says. “Philanthropy is everybody’s responsibility.”