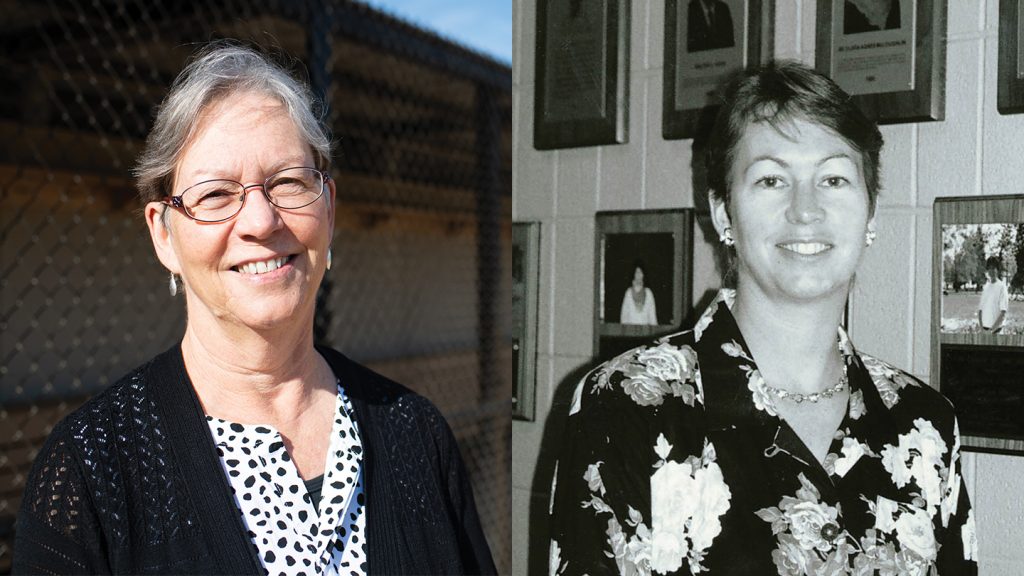 Cathy Haker began her career at Saint Rose in 1976 as the part-time women’s basketball coach, and subsequently became director of athletics and recreation, overseeing the varsity program’s growth from only women’s and men’s basketball to 19 Division II programs. During her tenure, intercollegiate participation grew from two dozen student-athletes to over 350 student-athletes annually. She retired in 2019.

Here are her own words on what Saint Rose, and her more than 40-year career here, meant to her:

Having been at Saint Rose for more than 40 years, I have been witness to tremendous growth and change at the College. At the same time, I’ve always felt that the foundation that the Sisters of St. Joseph built early on has continued to flow through all the changes that have occurred. That’s really rather remarkable.

When I first arrived at Saint Rose in 1976, there were still quite a few Sisters serving as faculty and administrators. Although there was a lay president by the time I arrived, the Sisters had a strong influence and physical presence on campus. Many lived in Saint Joseph Hall at the time, and I always felt that students and employees could and did thrive because it was such a supportive and welcoming community.

The milestone of 100 years is such a great accomplishment for a small school to reach and celebrate. I’ve been impressed with Saint Rose’s willingness and ability to change, grow, and respond to the needs of students, as well as to the greater community in Albany and upstate New York.

When I first applied for the basketball coach job that I found in the newspaper, I had to look the College up on the map. I had worked with inner-city youth in Albany, and attended a local high school locally, but I had never even heard of the College.

The first time we played a men’s soccer match at the University at Albany, in the 1980s, I remember how people watching the game were surprised to discover that Saint Rose had male students. That seems so long ago!

It’s amazing to think about how much change there’s been just in the last 40 years: the footprint, reputation, and awareness of the College both regionally and nationally.

I was given a tremendous opportunity at Saint Rose. I had no idea, when I started, where it all would take me.

When I started coaching, we’d practice and play at the Junior College of Albany gymnasium, so I didn’t even get to campus that often. After that first season, I was asked if I would be willing to work as a residence coordinator and live on campus.

At that time, they were just getting ready to build Alumni Hall and the original Campus Activities Center – which included the first gymnasium and pool on campus. Soon, my responsibilities expanded to include serving as coordinator of athletics and recreation. That’s when the doors opened up for my future career at Saint Rose.

I am so appreciative of everything Saint Rose has allowed me to strive for, particularly under the leadership of three presidents (Drs. Thomas Manion, Lou Vaccaro, Mark Sullivan) who had significant influence on the athletic department’s physical plant and growth through regional conference and national affiliations. I was also very fortunate to have had two Deans of Students (Mike D’Attilio and Dennis McDonald) who promoted and nurtured a culture of positivity and forward momentum throughout the Student Affairs area, and provided guidance and support through each growth spurt in the Athletics Department.

As administrators, we are dependent on our co-workers and on other offices on campus to accomplish tasks and meet goals. I’ve had the good fortune to work with so many dedicated coaches and support staff over the years, as well as with committed professionals throughout campus. When people view their work as more than a job, good things happen!

Most importantly, we work at Saint Rose to serve our students. I cannot begin to count the hundreds of student-athletes and non-athletes that I have had the pleasure to know over the years. Saint Rose is a special place that attracts special people!

In addition to a career that I cherish, both of my children earned their undergraduate and master’s degrees from Saint Rose. That’s an extra bonus!
I’m thrilled that I can join in celebrating the College’s 100th year, and I know that there are still many wonderful things to come!