Beloved associate professor in the School of Education (now Thelma P. Lally School of Education), Dr. Huey Charles Bogan joined the Saint Rose faculty in 1993 from Fairborn, Ohio, where he had taught in public schools for 19 years. At Saint Rose, he taught generations of future teachers, inspiring them with his tireless support and love of learning. His sons, Jeremy ’00, G’15 and Trevor ’02, are both graduates of Saint Rose, and Jeremy is a former administrator.

At his untimely passing in 2009, Saint Rose instituted the Dr. Huey Bogan Memorial Scholarship, at the request of his family and to recognize his contribution to the College.

We asked his sons to reflect on their father’s legacy.

Shortly after I transferred to Saint Rose, I remember sitting in a class in front of two students who were discussing Dr. Bogan. They had no idea I was his son. One said, “I heard that even if you get a C with him, you’ll learn more than if you got an A with someone else.” The other said, “You don’t want to take his class. He’s really tough.”

During roll call, the instructor said, “Jeremy Bogan, welcome home! We’re so excited to have you back.” I turned around and smiled at the students behind me.
After class, I told them, “You think it’s tough being in his class? Just imagine growing up with him!”

That was his thing: He really pushed students, challenged them, encouraged them to give their best. There are so many former students of his who are teaching, who really represent him in the classroom and push their students to want to be lifelong learners. So many told me, “If it weren’t for your father, I wouldn’t be the teacher I am today.” They’re so thankful that he believed in them in a way that others didn’t, and pushed them to help them become great teachers.

I feel he encouraged the faculty to hold their students accountable as well. He had so much pride in the School of Education and what his colleagues represented. He held all the faculty to a very high standard, and I think they really rose to the occasion.

His idea was that teaching is a calling, not just something you do to have summers off. He had this way of unlocking the potential in people. There would be students who didn’t have inspirational teachers when they were growing up, who would say, “I want to be that inspiration now.” He’d say, “Let me help you learn to do it.”

My father was the example of how I wanted to live my life: an outstanding balance of hard work and fun, being a lifelong learner, and always being inquisitive. It was always “wisdom beginning in wonder.”

When I was enrolled at Springfield College, I was thinking about transferring somewhere, and my father gave me a Saint Rose brochure. I didn’t consider Saint Rose because my dad was there, and I spent a good amount of time on campus while I was in high school.

He said, “Everyone in their life faces some sort of adversity or challenge. How you respond to that challenge is what defines you. So, how do you want to be defined?”

Saint Rose helped me define who I was, as a student and later as a leader in admissions and enrollment management for many years. Even in my life now. I owe that to my father, too.

I see so much of him in my kids, in terms of their sense of humor, creativity, desire to learn, as well as the way they connect with people. My father was great at building bridges with people, no matter their background. He could mix it up with the most learned academics in the world, but then be with the person who has had a rough life and a tough upbringing. That helped me learn how to connect with people from all walks of life.

He was a great man and such an inspiration. I miss him every day. 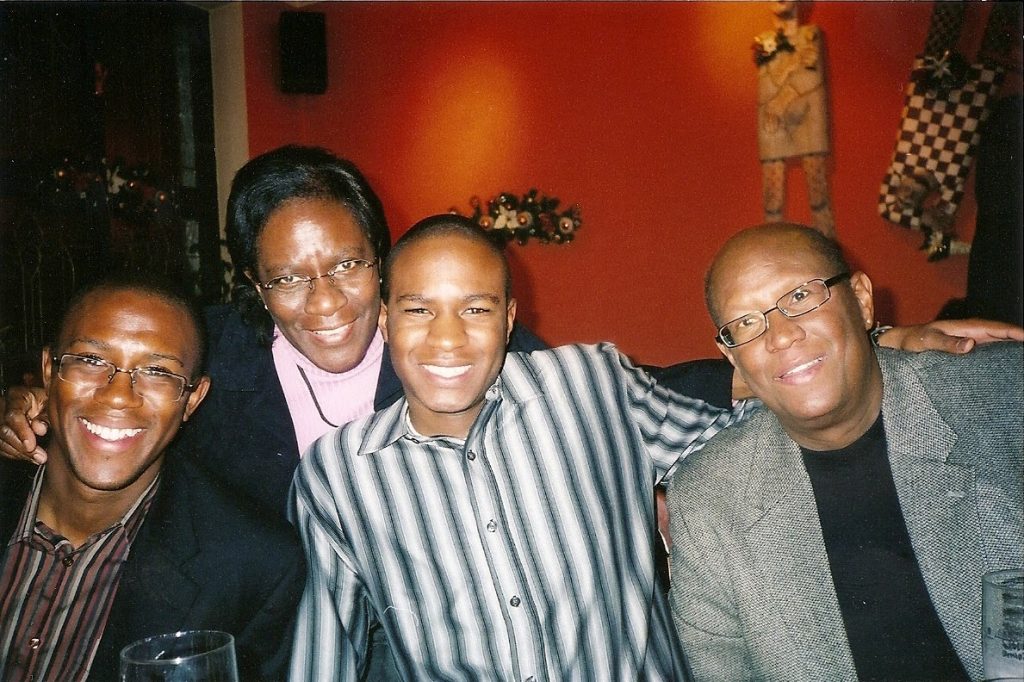 My dad always loved teaching and education. You’d see it in his day-to-day interactions with everyone, whether he was talking about education or providing knowledge for students. He’d say, “You can never take education away from people.”

I think he was placed on this earth to inspire people.

He wanted his students to be a role model, in whatever school and whatever grade level they would teach. To have passion around their students’ learning and knowledge. Keep them motivated.

He was big on being super critical about what you’re doing every day: Wake up every day and have a purpose. Your purpose is to teach people, help them learn math, English, how to write. And learn from other people, other cultures. Those are things that are going to help you be a great person, and to be kind – a really good person.

Understand that everyone goes through challenges. Support everybody and work with everybody. Don’t judge people for how they live.

That went for Jeremy and me as well as for his students. He felt we should really understand what other people go through. He was a big supporter of traveling and learning. My family would drive across the country; we went to Canada; we went to Europe. So many special trips.

He’d say, “I want you to see other parts of the world so you can be grateful for how good you have it, and learn about different cultures, food, environment, architecture.” He found so much happiness educating us not only with books, but going out and experiencing. I think he tried to do that with everyone.

I love my dad. I miss him every single day. When I was a student at Saint Rose, I’d see him walking across campus, and we’d sit down and chat. I’d tell him what was going on with me; I might ask his opinion on something. He was always there to help.

I learned something from him every single time.

For instance, he helped me with persuasive writing. It’s about getting people to look at something in a way they wouldn’t normally. He helped me understand people’s personalities and how they think. Making that light switch come on, like, “Hey, I never thought about it that way!”

He was all about getting people to think. Whether it was verbal or written communications, or the way we would shoot videos, or take photos – he loved art – different angles you could look at things.

He had such a good heart. He was challenging, but in the right way.

He understood that Jeremy and I were different people who learned differently, reacted to things differently. He was great at showing us in such a way so we could grasp and understand; the why behind everything.

He was so much fun. He lit up the room. Everyone gravitated to his positivity, his good energy; and he was always making people laugh.

I see his legacy as having passion around teaching others. Helping people grow and develop, no matter their situation.

When you’re passionate, and show people your passion, you can create miracles. You can help them do great, positive things in their community. You’re not just teaching them course material. You’re a life teacher, helping them manage friendships, partnerships, their kids, whatever is going on in their lives. You’re making an impact on everything.

Take someone who might not be a great student, and they can become an A student. They can become a doctor, or a scientist, or an engineer, or a lawyer.

You have that power, that positive power.