Few individuals in Saint Rose history are as decorated as Patricia Hunter Standish ’50, G’57, and her late husband J. Spencer Standish. The couple received the Spirit of Saint Rose Award in 2004, were honored at the 2009 A Community of Excellence event, and received honorary degrees in 2013. 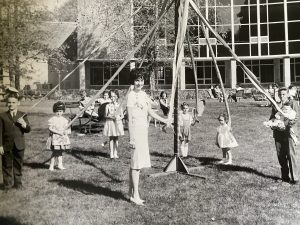 In 2015, the couple’s substantial gift established and endowed the J. Spencer and Patricia Hunter Standish ’50, G’57 Endowed Chair in English. Other projects and programs at Saint Rose include the naming of the Standish Atrium in the Massry Center for the Arts and the Patricia Standish Education and Curriculum Library in the Thelma P. Lally School of Education, dedicated in 2002.

A familiar face on campus for decades, Patricia Standish was a Saint Rose trustee for nine years, and served as an adjunct lecturer in English, sharing not only her studied scholarship, but her energy and love of Anglo-Saxon and medieval literature. Her son, Philip Battaglia, is continuing his mother’s connection to her alma mater by serving on the advisory board of the College’s Women’s Leadership Institute.

“I have always remained a part of the Saint Rose family out of gratitude for the excellent education that I received there through its wide-ranging course curriculum and arts programs. Over the years, I have watched proudly as the College has navigated an ever-changing world while remaining true to its core values and mission. I say this with confidence as a former student, grad student, lecturer, and trustee. It was not long after I married my late husband, Spencer, that he too recognized what I saw in Saint Rose, and together we sought to ensure that future generations would have the benefit of all that it has to offer.”